Sally Field’s charming comedy Hello, My Name is Doris comes to DVD, BluRay and streaming video this week, offering fans extended scenes that further explore the mind of Sally’s eccentric lead character. In this one, exclusive to Movies for Grownups, we get a longer look at Doris’ exasperated realization that her lovely, young romantic rival Brooklyn (Beth Behrs) is as talented as she is sweet.

Here’s a Father’s Day Weekend challenge: See how many of these classic movie dads you can identify before the answers roll at the end. 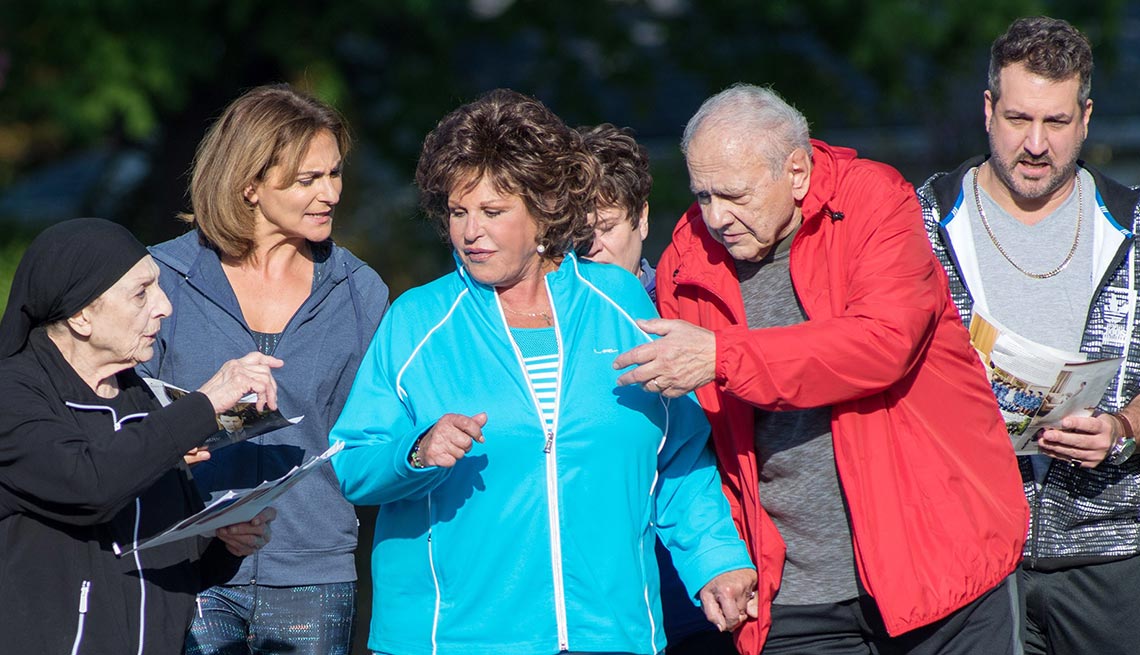 For 14 years, whenever Lainie Kazan saw her friend Nia Vardalos, writer/star of their smash comedy, My Big Fat Greek Wedding, she had one question: “When are we gonna do the sequel?” Finally, Lainie tells Movies for Grownups, just over a year ago “We were having dinner and she said, ‘We’re doing it!’ I got to read the script, but only in a locked room — they actually brought my lunch in.” The secrecy paid off: After making $88 million worldwide (on an $18 million budget), the comedy comes to DVD and BluRay on June 21.

Ellen DeGeneres leads an A-list of veteran stars—including Albert Brooks, Ed O’Neill, Diane Keaton and Eugene Levy—giving voice to the endearing aquatic characters in Pixar's latest animated masterpiece. There are laughs aplenty, but (as in every Pixar epic), moments of genuine sentiment and transcendent beauty.

In this action buddy comedy, Kevin Hart stars as a meek accountant who reconnects with an old high school classmate (Dwayne “The Rock” Johnson)—and gets swept into a dangerous case of international espionage.

Intimate to the point of near voyeurism, this portrait of a long-married couple (Charlotte Rampling and Tom Courtenay) finally facing up to a conflict that has been brewing for more than four decades is one of the finest depictions of marriage ever put on screen. One of last year’s best movies.

Sally Field is magnificent as a 60-something office worker pursuing an unlikely crush on a handsome young coworker (Max Greenfield).

More than London Bridge is falling down in this action spectacle: Terrorists are bombing everything in sight during a summit of world leaders. The bad guys want to podcast their execution of the U.S. president (Aaron Eckhart); his Secret Service buddy (Gerard Butler) and vice president (Morgan Freeman) have other ideas.

Colin Firth and Jude Law star in this uncommonly literate and unexpectedly moving account of legendary book editor Max Perkins (Firth) and his stormy mentorship of author Thomas Wolfe (Law). The story portrays art being forged in the furnace of conflicting personalities; the film is about the inscrutable mysteries of creativity.

Pack your pockets with tissues before settling in for this unapologetic weepie, the story of a young woman (Game of Thrones’ Emilia Clarke) determined to make life worth living for a handsome quadriplegic (The Hunger Games’ Sam Claflin). Charles Dance and Janet McTeer are touching as the hero’s furrowed-browed parents.

The prodigious prestidigitators who participated in the primary part of this pair of pictures proffer a perfectly presentable postscript. Jesse Eisenberg, Woody Harrelson, Dave Franco and Lizzy Caplan are back as the Four Horsemen, a renegade stage magic team coerced into doing some backstage moonlighting for a goofy tech mogul (Harry Potter’s Daniel Radcliffe).

Luis Guzmán and Edgar Garcia are fun as a pair of NYPD cops dispatched to the City of Light to nab some fashion pirates. It would have been more fun if the guys had brought along their costars, Rosie Perez and Rosario Dawson, who are wasted as their better halves back home in Noo Yawk.

More than 20 years after the release of the classic video game, the movie version of the Orcs vs. humans epic slashes its way onto the screen. If you love the game, you’ll probably spend an agreeable two hours. If you don’t know your Orcs from your Morks, stay far, far away.