Elvis & Nixon pours together two 20th-century icons in a fun and fizzy cocktail. The movie delights from the very first sip, leaving you sorry there isn't more story to savor.

It's a matter of record that the single most-requested document from the National Archives in Washington, D.C., is the official photo of Elvis Presley visiting Richard Nixon in the Oval Office on Dec. 21, 1970. Few details of the visit itself are known, other than its random genesis: The King turned up unannounced at the White House gate that morning and requested an audience with the president. Once inside, Elvis volunteered to serve his country as an undercover drug-enforcement marshal.

On that delicate frame of fact, director Liza Johnson and her writers (including Cary Elwes, star of The Princess Bride) build a pleasingly ramshackle tale. It pretends to fill in the blanks, when really it just wants to bask in the quirky personalities at the story's center. And so do we.

Angular and lanky, Michael Shannon's Elvis is a bit more fit than the real McCoy, who was on the verge of doughy in 1970. But as Elvis, Shannon perfectly captures the mix of smoldering sexiness and earnest innocence that endeared the singer to his fans. Though he materializes without warning at 1600 Pennsylvania Ave., this Elvis doesn't expect the gates to fly open; instead, he approaches the incredulous guard and introduces himself. And when he encounters the inevitable resistance, he doesn't play the celebrity card; instead he simply tries to smooth-talk his way inside. 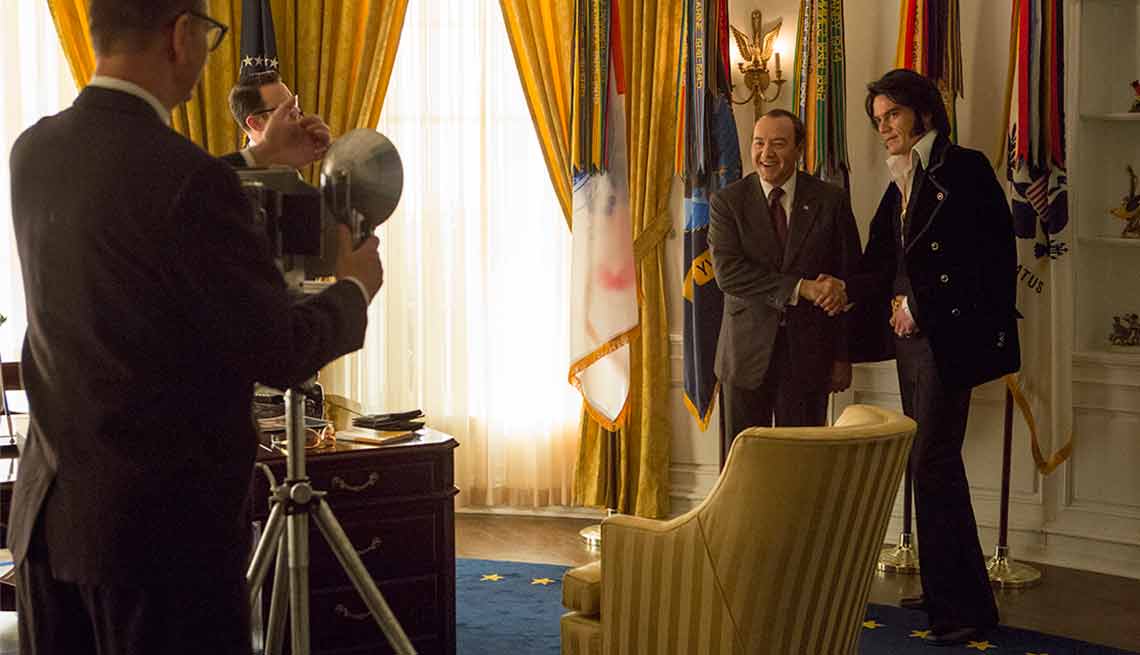 Kevin Spacey plays Nixon as a man who, though reluctant to sacrifice his afternoon nap for an audience with the King, suspects there's political hay to be made here. He suggests that a picture with Elvis might help endear him to those kids out in the streets protesting the Vietnam War. Of course, Nixon is deaf to the fact that most of those kids consider Elvis — still singing "Heartbreak Hotel" as they chant "Give peace a chance" — to be as hopelessly out of touch as the nation's chief executive.

Oscar-winner Spacey, whose gift for mimicry has made him a staple on talk shows, puts his skills to good use here. He has perfected Nixon's distinctive rumble, for starters, and his slouch, though a bit exaggerated, is precisely the way we remember RN from a generation of Herblock cartoons. If Spacey doesn't capture Nixon's very soul, as Frank Langella did in Frost/Nixon, neither is his take a caricature, the way Dan Hedaya's was in Dick. It's a knowing performance, perfect for the context, that exquisitely straddles the historical and the hysterical.

Much of the movie's first hour is spent setting up why Elvis wants to see Nixon. A peep behind the White House drapes reveals the furtive negotiations required to arrange the meeting. It's all great fun, with Colin Hanks especially amusing as a White House functionary. But once we get both men in the same room, the film becomes truly priceless.

Here's Elvis, penetrating Nixon with his laser gaze. Pleading to play a role in the war on drugs. Demonstrating his best judo moves. And helping himself to RN's Dr. Pepper.

And here's Nixon, resentful at first of the intrusion, then slowly warming to the singer and pointing out their shared humble roots. Spacey's Nixon never loses sight of the chance to use the visit to score political points. But as he loses himself in Elvis' weird brand of hypersincerity, Nixon finds himself wanting to linger, perhaps longing for a measure of the singer's utter lack of guile.

The meeting, and the movie, end too soon.