(Video) Captain Fantastic Movie Trailer: Deep in the forests of the Pacific Northwest, isolated from society, a devoted father (Viggo Mortensen) dedicates his life to transforming his six young children into extraordinary adults.

The fact that we're willing to stick with this blustering loser — at times even root for him — is a tribute to the sublime skill of a masterly actor. If this guy sat down next to you in the theater, however, you'd quickly change seats. By the final fade-out, we're not so much enlightened by him as glad to be rid of him.

Mortensen (A History of Violence) plays Ben, a tree hugger of the first magnitude, who along with his wife has raised six children in tents and sheds somewhere in the deep woods of the Pacific Northwest. With no electricity, the kids' only diversions are robustly analogue: group sing-alongs, hunting wild animals and — gasp! — reading books. They are all homeschooled, of course, which has allowed Mom and Dad to thoroughly indoctrinate their children in political and economic theories so far left that they would turn Bernie Sanders' hair brown.

It's a tough life, made tougher by Dad's rigorous daily training sessions, which involve hours of exercises, brutal runs through the forest primeval and rock-climbing routes up sheer cliffs. For this cinematic clan, life is something like The Royal Tenenbaums meets Swiss Family Robinson, with traces of The Great Santini mixed in.

This harsh existence is not for everyone — including, it appears, Ben's wife, Leslie (Trin Miller), who at the film's opening has been hospitalized for depression down in New Mexico, near her parents (Frank Langella and Ann Dowd). On one of his infrequent trips into the nearest outpost of civilization, Ben gets the crushing news that his wife has killed herself. After Ben informs the children — in the film's most powerfully intimate scene — they board the family's battered motor home and head to New Mexico for the funeral. 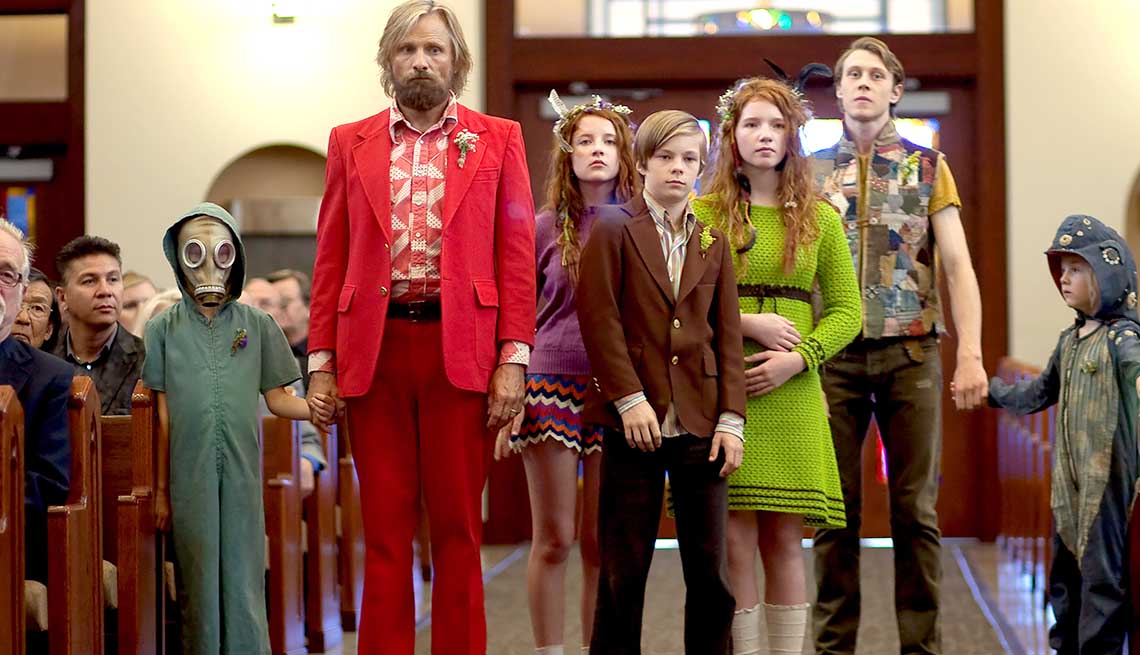 This decision is not quite the no-brainer it might appear to be: Ben's father-in-law has ordered him to stay away, lest he have him arrested and take charge of the children.

Still, off they roll, right through the heart of Middle America. As the movie trailer has it, the only thing he hasn't prepared them for is the outside world: so many stores ... so much urban blight ... so many overweight citizens.

"What's wrong with everyone?" one of the kids asks incredulously. When modern society's excessive eating habits are explained, the response is nearly unanimous: "Can we have hamburgers?"

Captain Fantastic could have been a straightforward screed that exalts the simple life while excoriating contemporary American culture. But writer-director Matt Ross (best known as Gavin on HBO's Silicon Valley) aims higher than that. Tough as the film is on How We Live Now, time and again Ross and Mortensen expose Ben for the puffed-up egomaniac he is. His contempt for all he sees wears thin the instant we realize how blind he is to the hazards and hardships his own children must endure every day.

Clear-eyed about the situation, by contrast, is Ben's father-in-law, Jack. Until we meet the man, we've had only Ben's angry, resentful take on him. Indeed, when the two come face to face, the older man's seething anger seems to confirm our worst fears. But then Langella (Frost/Nixon, Robot & Frank), the craftiest of actors, disrupts all expectations the minute his character turns his attention to the grandchildren. Erupting with tender sympathy, Jack seems to embrace all of them at once, his voice softening to a lullaby of affection. As his wife, Abigail, Dowd tries to bridge the chasm between the two, but it's clear she's been toiling at this span for decades without success. She remains dedicated to the task but exhausted by its futility.

The complex dynamics that unfold once the clan arrives in New Mexico make it clear we've left the dirt-and-grit simplicity of forest life far behind: To highlight his disdain for the comfort and consumerism he finds at every turn, Ben embarks on progressively more outlandish behaviors. It doesn't help that his in-laws live in a virtual palace, with furnishings just this side of Liberace's digs.

Ben is clearly flailing — and, from here on, so does filmmaker Ross, who chooses to end the film with an outrageously impractical — and likely impossible — family caper that I won't detail here. I can reveal that the film's final quarter is custom-crafted to enable a particular closing shot, and that Ross takes whatever liberties he must to achieve it.

And what of the film's young cast, who range in age from 7 or so to their late teens? Though saddled with trippy character names such as Kielyr, Vespyr, Rellian and Zaja, they are all called upon to convey some fairly complex emotions — from fierce loyalty to extreme mortification — that illustrate their complicated relationship with their Jeremiah Johnson dad. Two of the oldest, in particular — George MacKay and Samantha Isler — bring an endearing vulnerability to their performances.

It's easy to imagine, several years from now, seeing these two in grownup roles and blurting out, "Hey, remember them? They were in that movie about the weird family in the woods. The one with the stupid ending."