Captain America: Civil War is a duck-billed platypus of a movie: ungainly, seemingly slapped together, but undeniably fun to behold.

Shoehorning virtually every major character from the Marvel Comics Avengers team into a single slam-bang fightfest, the movie delivers something for every good little fanboy and girl, with appearances of Marvel regulars from Ant-Man to Zemo.

For the rest of us, Civil War balances its relentless, big-screen spectacle with surprisingly satisfying performances by its grownup stars — including Robert Downey Jr., Don Cheadle, William Hurt, Hope Davis, Marisa Tomei and, in an especially affecting scene, Alfre Woodard as the mother of a young man accidentally killed in an Avengers mission.

Like the recent Batman v Superman: Dawn of Justice, in which the Man of Steel is called to testify before a hostile congressional committee, the plot of Civil War turns on the world's regular folks becoming uneasy living in the shadow of superheroes. When a superhero-run rescue mission in Africa ends up killing innocent bystanders, the United Nations passes a global law regulating the actions of the Avengers. (Maybe they should have adopted a less confrontational title in the first place.) 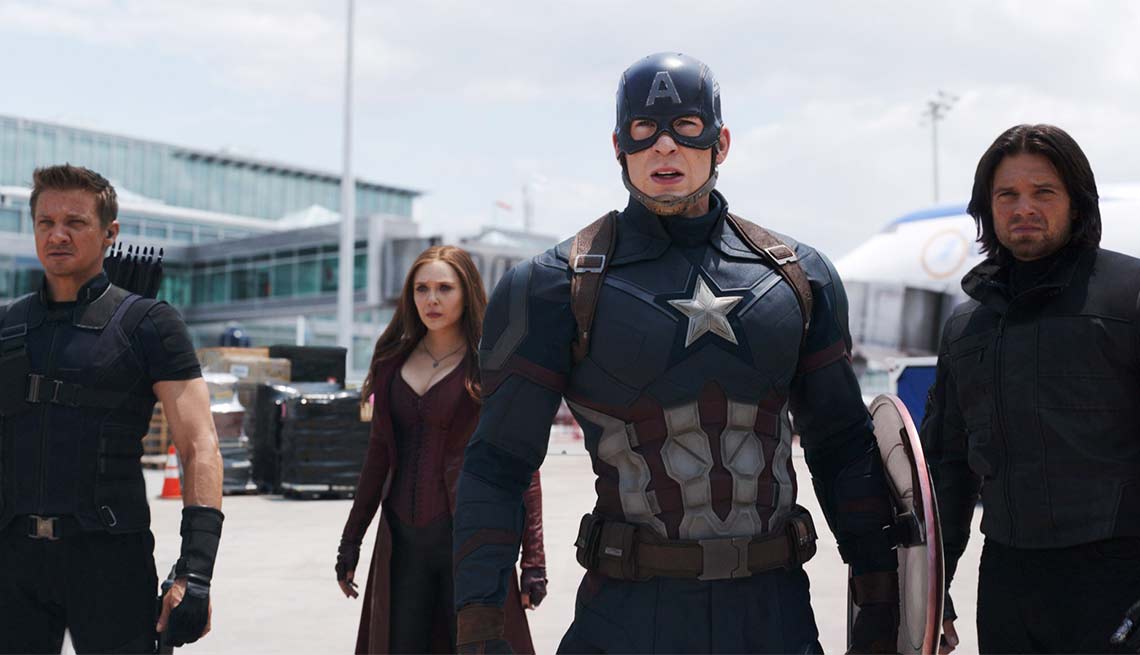 Quickly, the Avengers take sides. One faction, led by Iron Man (Robert Downey Jr.), agrees the team should be reined in a bit. Disagreeing most vociferously is Captain America (Chris Evans), who believes you have to break a few eggs to keep the world a safe omelet. Scurrying to opposing corners, the two sides find themselves in a battle royal that occurs, for reasons I can't remember but am certain make perfect sense, on an airport runway.

A crazy quilt movie like Civil War is going to show a few seams, and the film's Underoos appear most tellingly when the script suddenly lurches sideways to introduce Spider-Man (Tom Holland) to the proceedings. One moment Downey is raising that curled eyebrow of his, wondering where he's going to find another superhero to stack the deck in his side's favor, and before you can say "Spidey Sense" he's sitting in Peter Parker's living room sweet-talking his mother (Tomei) and enlisting this kid he's never met to swing off for the Greatest Superhero Battle of All Time. The web slinger's appearance — and abrupt exit — may be important for future Avengers installments, but here it's handled with all the subtlety of a gigantic, 20-story-tall Ant-Man (Oops. Spoiler alert).

All superhero movies are fight-laden, but the premise of Civil War requires more calamitous face-offs than an NHL highlight reel: The former pals first have to do battle with each other — individually and en masse — before they can deal with the film's actual arch villain, who has launched a nefarious plot to … well, again, I'm not quite clear about exactly what he's trying to do — but it's nefarious, all right. You bet.

If you've bought a ticket for Captain America: Civil War, you know precisely what you're hoping for, and as with virtually every Marvel film, you'll get it and then some. For those of us who don't know our Black Widow from our Black Panther (played by Scarlett Johansson and Chadwick Boseman, if you're keeping score), the film is more akin to a Fourth of July fireworks display: loud, spectacular and pleasingly disorienting.