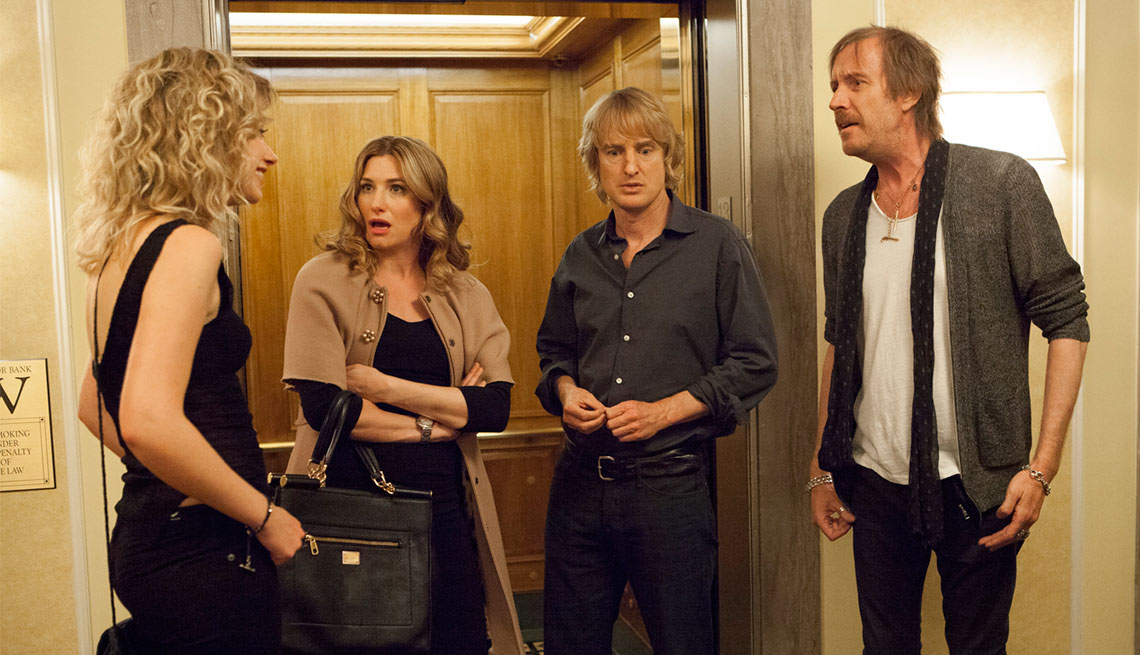 She's Funny That Way lives up to its name: It's a fun farce that skewers all manner of theater people — except for lovely Imogen Poots, the "She" of the title (and the only innocent in the bunch). The film is the newest work from veteran writer-director (and occasional actor) Peter Bogdanovich, who proves that being funny is age-agnostic. Hollywood's 76-year-old elder statesman hasn't made a feature film in more than a decade, yet back in the day he crafted two of Tinseltown's funniest flicks ever: the classic Paper Moon (1973) and the screwball What's Up, Doc? (1972). Bogdanovich reclaims that fine form with She's Funny That Way, perfectly casting a bunch of talented actors, then plunging them into romantic shenanigans that make us fall in love with their characters.

British-born Imogen Poots — she of the regrettable name but radiant screen presence — plays Isabella "Izzy" Patterson, a 20-something Brooklyn gal who's moonlighting as a call girl while awaiting her big break as an actress. That moment arrives when her madam (Debi Mazar) dispatches Izzy to a posh downtown hotel for a "date" with famed Hollywood director Arnold Albertson (Owen Wilson). He's in town directing a play starring his well-known wife (Kathryn Hahn) and her ex-lover, a hugely famous movie star (Rhys Ifans). Sex, money and a few other things get exchanged along the way, landing Izzy a role in the drama — and precipitating a cascade of genuinely amusing high jinks. Jennifer Aniston rarely gets the critical credit she deserves, so it's gratifying to watch her priceless portrayal of a shrink who's simply terrible at her job. She's fallen in love with the playwright (the always likable Will Forte), who meanwhile has taken a shine to Izzy.

Aniston's character is also treating a lovesick judge (Austin Pendleton), who has become so enamored of Izzy that he's taken to stalking her with the help of a private detective (George Morfogen). As Izzy says in the interview that frames the film, "It isn't easy being someone's muse." As these disparate relationship threads weave together, clash, pull apart and re-form, there's crackling dialogue, silly situations and a modicum of physical comedy. Mix in cameos from Richard Lewis and Cybill Shepherd as Izzy's battling parents and you end up with a movie that keeps you giggling throughout. (Between laughs, film buffs of a certain age may get all wistful at the sight of the still-lovely Shepherd, whose big break came 44 years ago in Bogdanovich's Oscar-winning The Last Picture Show. Let's hope She's Funny That Way is not the last picture show these two talents intend to deliver.)

The zany, crisscrossing action reaches a crescendo as the main players slam in and out of a series of hotel rooms along a single hallway. The scene evokes Noises Off, another Bogdanovich comedy about theater people undergoing relationship meltdowns. Unlike that less-than-successful 1992 film adapted from a hilarious Broadway show, however, She's Funny That Way was written for the screen, and it shows — in a good way: The scene may be predictable, yet the uncontrolled chaos succeeds in cracking everyone up. Stick around for the credits, which contain some terrific payoffs to earlier jokes. In particular you'll want to keep an eye peeled for the actress who plays Aniston's mother, executing an absolutely fabulous sight gag for lovers of a certain British TV comedy.

Jenny Peters is a freelance journalist, editor and party columnist in Los Angeles. You can follow her on Twitter @jennpeters.

(Video) 'She's Funny That Way' Movie Trailer: On the set of a playwright's new project, a love triangle forms between his wife, her ex-lover, and the call girl-turned-actress cast in the production.