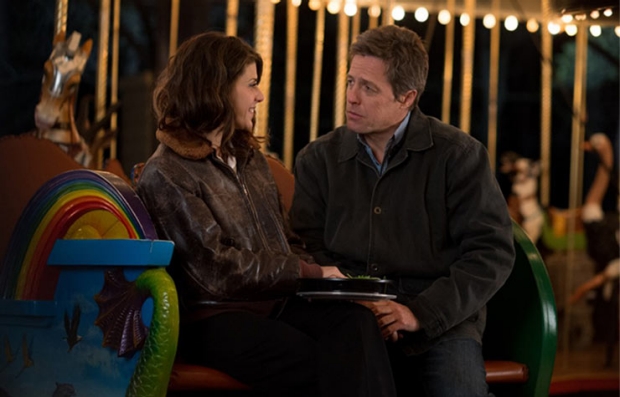 In “Rewrite,” Hugh Grant stars as a once triumphant but now struggling Hollywood screenwriter who falls for Marisa Tomei.

On the weekend when America's multiplexes are being mugged by 50 Shades of Grey, you could do a lot worse than to go far from the mating crowd and take in this harmlessly enjoyable romantic comedy. It's the kind of feel-good diversion that too few people make anymore. (And with The Rewrite available on video on demand as well as iTunes, you could even snuggle up and watch it at home.)

Hugh Grant stars as a once triumphant but now struggling Hollywood screenwriter who grudgingly takes a job teaching screenwriting at a college in Binghamton, N.Y. There's your first smile right away: stiffly upper-lipped Professor Grant walking the mean streets of Binghamton (which he comically pronounces "Bing-HAM-ton").

No one in the excellent cast is asked to venture beyond their comfort zone: Besides the charmingly befuddled Grant, Marisa Tomei is the button-eyed, down-to-earth girl he will inevitably fall for; Allison Janney is the stuck-up department head; J.K. Simmons is the gruff but lovable dean; and Chris Elliott is the eccentric next-door neighbor. Seriously, you could have cast The Rewrite yourself — and I don't mean that to be taken as any sort of deplorable dynamic.

Writer-director Marc Lawrence, who collaborated with Grant to produce two earlier crowd pleasers (Music and Lyrics and Two Weeks Notice), knows exactly what he's doing with his star. Grant has been good cinematic company ever since we met him more than 20 years ago in Four Weddings and a Funeral, and he doesn't even come close to wearing out his welcome here.

Spoiler alert: There's a happy ending. And unlike those Shades weirdos, no one gets hurt.