Movies about race tend to focus on a single character: He or she starts out hopelessly prejudiced, only to realize before the final fade-out that (sigh) people are all pretty much the same, regardless of their nationality or skin color.

In Black or White, the bighearted new film starring Kevin Costner and Octavia Spencer, writer-director Mike Binder's brave goal is to make a film that does not obsess on finding common ground between the races. Instead, he seeks the touchpoints of shared humanity that help people of different backgrounds see the world, if only for an instant, through one another's eyes. 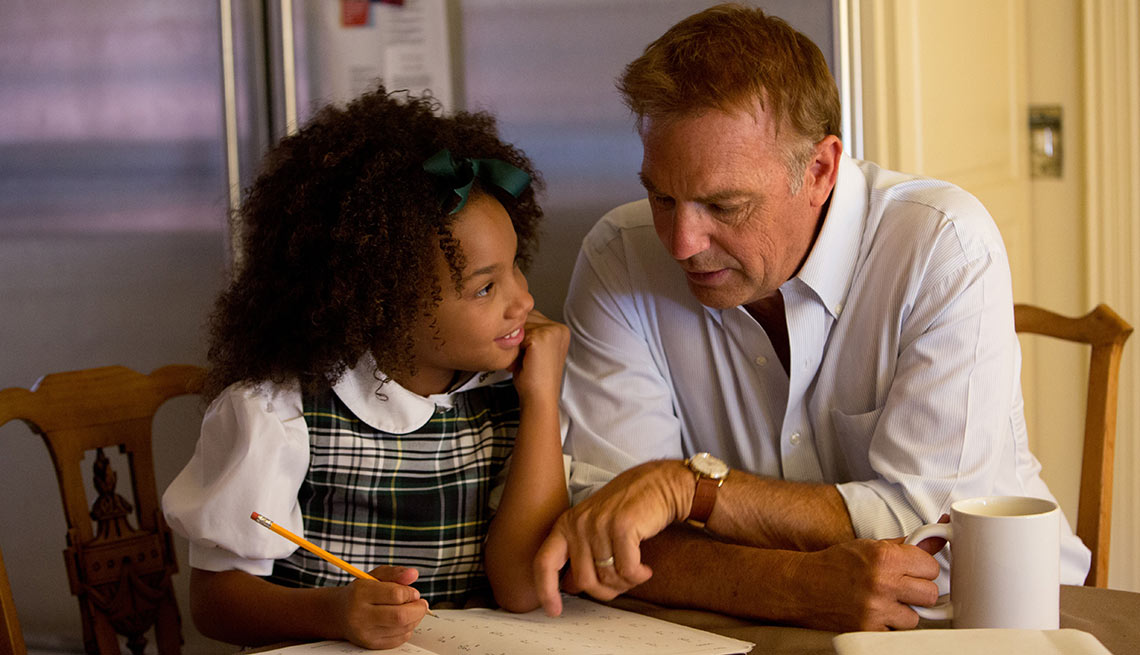 Kevin Costner and Jillian Estell are family in “Black or White.”

Costner stars as Elliot Anderson, a thriving Los Angeles lawyer who, along with his wife, has raised his mixed-race granddaughter, Eloise (sublime newcomer Jillian Estell), after their daughter died in childbirth. As the film opens, Costner's Elliot has just lost his wife, too — the victim of a freeway crash — leaving him to raise Eloise on his own.

Elliot is just barely keeping it together. Every night after tucking his granddaughter in bed, he marinates his pain in the contents of the well-stocked bar in his palatial home. But his love for Eloise — and her deep affection for him — promises to see them through their shared trauma. An early scene in which Costner reads a bedtime story to the child is so tenderly played and shot that we feel almost embarrassed to witness the moment.

That tableau also sets the stakes sky-high for the sudden appearance of Eloise's paternal grandmother, Rowena Jeffers. A force of nature played for keeps by Spencer, Rowena informs Elliot that she wants Eloise to come live with her and her extended family in Compton. (Is Binder toying with audiences here? For many viewers of all races, the mention of that Los Angeles suburb evokes N.W.A.'s 1988 landmark release Straight Outta Compton, which defined gangsta rap for a decade.)

But no angry place is Rowena's home: Family members and friends traipse in and out, playing music, singing and laughing at a deep reservoir of inside jokes. Rowena, a budding entrepreneur, runs a real estate business from the garage of her meticulously kept home while keeping an angry eye on the crack house across the street.

The movie's most interesting scenes occur whenever Elliot or Rowena ventures into the other's world. It's clear they've had a cordial relationship over the years; Elliot is welcomed warmly by Rowena's family when he drops by her place, and he takes unalloyed delight in watching Eloise frolic in his backyard pool with her Compton relatives and friends. Still, the conflict between Elliot and Rowena continues to fester, and the matter ends up — inevitably, perhaps — in a court of law.

Black or White raises some crucial racial questions, but the film doesn't always address them in the most elegant manner. Rowena's brother, a sharp-suited lawyer, oozes disdain for Eloise's absentee (and crack-addicted) father, calling him a "perfect stereotype." Elliot is struggling with an equally debilitating addiction — only the abused substances of choice differ — yet no one ever points out the tragic parallels between the two aspiring fathers.

Still, this is a film of noble aims, peopled with a cast that embraces profound themes to deliver nuanced performances. It's OK to be different, Black or White tells us, and sometimes the discomfort we feel with each other is the root of an ultimately deeper understanding.