En español  |  Are you the type of person who can never recognize celebrities' faces? I know I am. I can say without hesitation that if Meryl Streep were to walk up to me on a sidewalk and demand, "Do you know me? I'm America’s greatest living screen actress," I'd stare blankly at her for a good 30 seconds before finally settling on whether or not I was looking at Glenn Close, Blythe Danner, or Patricia Clarkson (Meryl, I'm afraid, would come in a distant fourth).

So I was at a distinct disadvantage when I sat down for New Year's Eve, the latest all-star romantic comedy from director Gary Marshall—a film that, as one character observes in one of its funnier lines, “has more celebrities than rehab.” When people say they don't make movies like they used to, they are not speaking of Marshall, who most emphatically does make movies like they used to, in this case they way they made them in 1935. That's when Hollywood studios churned out entertainments like The Big Broadcast and Gold Diggers, featuring the studios' biggest stars by the dozens in skits, melodramas, and musical numbers, all linked by the flimsiest of plot lines. New Year’s Eve, which traces the trajectories of a dozen or so New Yorkers on the Big Night, follows in that tradition with a cast that parades past the lens as if they’re on the People's Choice Awards red carpet. On hand are a lot of young faces for the post-Disney Channel crowd (Zac Efron, Abigail Breslin, Jake T. Austin), musicians trying to show some acting chops (Ludacris, Sarge, Common, and don't any of these guys have last names?), and otherwise respected actors of whom Marshall clearly has incriminating photos (Michelle Pfeiffer, Cary Elwes, Katherine Heigl, Halle Berry, and this sad list goes on and on). 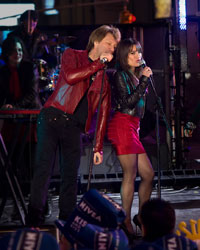 At my screening, the audience cooed with appreciation whenever a new face turned up. As for me, I really could have used identifying subtitles. Luckily, my wife, Carolyn, was there to set me straight.

"Boy, Colin Hanks looks so much like his dad!" I whispered.

"Is Alan Arkin doing his own stunts?"

At this point, I suppose if there were an empty seat elsewhere, she would have moved. Sadly for her, though, the theater was nearly as packed as the screen.

One thing I do like about Gary Marshall movies is his loyalty to a core of supporting players who have been with him, it seems, forever. Elizondo is one (it was his wool cap and Russian accent that fooled me—I must have been thinking of Arkin in The Russians are Coming! The Russians are Coming!). And then there’s the wonderful Larry Miller, this time as a fast-talking tow truck driver—and if there’s any doubt that Miller is among the funniest men who’ve ever lived, just go to YouTube and search “Larry Miller Five Levels of Drinking.” It’s also nice to see Marshall’s sister Penny Marshall, of Laverne and Shirley immortality, as a loud guest at a New Year’s Eve party.

Well, those were at least two faces I recognized in the course of New Year’s Eve. I also caught a glimpse of John Lithgow, uncredited, but who could miss that amazingly long, wild-eyed visage? And Matthew Broderick—who by the way is finally easing into a pleasingly doughy middle age—gives, literally, a drive-by cameo. I briefly wondered if that was Mel Brooks playing New York Mayor Mike Bloomberg, but the second he opened his mouth to speak, and he wasn’t funny, I realized it was Hizzoner himself.

New Year’s Eve isn’t billed as a science fiction film, but seasoned New Yorkers will recognize the fact that many of these characters must be in possession of time/space teleportation devices, given the way they zip between locales. One second Bon Jovi is rocking out in Times Square, and mere moments later, as the narrative would have it, he’s canoodling with Heigl at the Queens Museum of Art, which would be a half-hour drive even in a post-apocalyptic world in which all roads in and out of the city have been cleared of vehicles by metal-devouring aliens.

Like those 1930s star-studded extravaganzas, New Year’s Eve is harmless, fluffy fun at times; carelessly crafted and clunky at others. Trouble is, back in the day you could breeze in and out of those time killers for mere pennies. Now that nice lady behind the bulletproof glass expects you to hand over nearly twice the national hourly minimum wage for one admission. That’s a big investment for the cinematic equivalent of cotton candy.

Oh, I almost forgot: Robert De Niro plays a lonely old man dying alone in a hospital on New Year’s Eve. And I’m pretty sure he’d rather we NOT recognize him.