With a new movie (Parental Guidance, see clip above) coming out on Dec. 25 and his memoir about turning 65 due next fall, Billy Crystal knows a hell of a lot about entertainment, publishing and paying attention to what life is trying to tell you. We asked him to share a few of his favorite takeaways.

Coming up with ideas for his comedy Parental Guidance was easy, Billy Crystal tells Allan Fallow: He just looked for inspiration from his own grandkids. (Listen to the interview below.)

Real Life Is Fertile Ground for Films
The idea for Parental Guidance came from babysitting our two young granddaughters five years ago. Janice [his wife of 42 years] and I had them alone for the first time for five days. And on the sixth day, I rested. Then I went into the office and started talking about what we'd just been through: the old school versus the new school, trying to follow my daughter's rules for how to handle kids, knowing what to say, feeling out of step with basically being a parent again, and not overstepping those boundaries. All that became the juice of the movie.

Pater Familias Is an Easy Role to Play
I've got three grandkids now — Ella is 9, Dylan's 6, and Hudson's nearly 3 — and a fourth on the way. I love having them around me — they're wonderful young people — and it's great to be able to hand them back. And I like being called "Grandpa."

By the Time We Archived Woodstock, We Were 80 Million Strong
I'm thrilled we got to make Parental Guidance, but I wonder if studios want to make movies with people of our age. Yet look at the track record of all these movies now that are doing so well! There's almost 80 million of us out there who would like to see something about us.

Life Is a Big Canvas; Walk Softly and Carry a Small Brush
The trailer for Grampires with Helen Mirren and Rob Reiner was only four minutes, but it got, like, a million hits in a day on funnyordie.com. My tribute to Bob Hope [at the 2011 Oscars] was only two minutes. And I worked all of three days on Small Apartments, a really fun, dark murder mystery/comedy directed by Jonas Åkerlund. So I said, "You know? This is great! I can just paint in miniature!"

"Jokes Are for Older People"
I've never tried teaching my grandkids to tell a joke. They're all very funny in their own way — it's 'cause kids are — and you just want to let them be naturally adept. This weekend Hudson was with us — he's the little guy — and I heard this huge noise. I looked over and he went, "Ooh! Must be something I ate!" Then he got hysterical laughing and held up this whoopee cushion. I'm very much his grandfather. 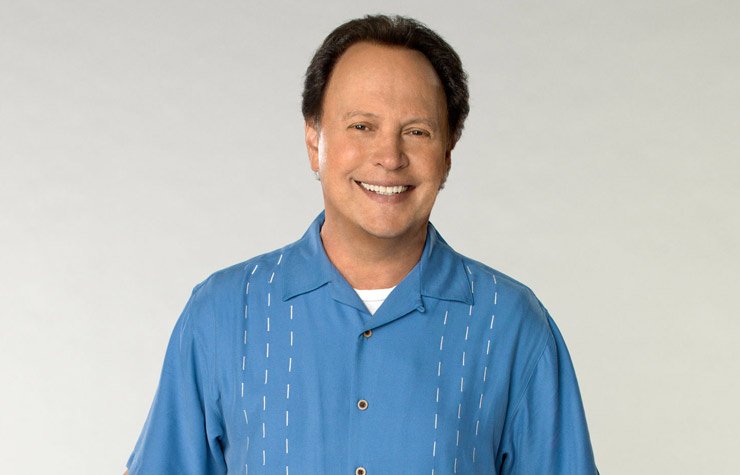 Billy Crystal shares what he knows now that he's almost 65.

When Opportunity Knocks, Answer the Door
I'm the dope who turned down Toy Story. Jeffrey Katzenberg brought me over to his house when they were making Aladdin and said, "You have to meet this young man." It turned out to be John Lasseter … I thought John was a genius, but I got bad advice from agents and managers, then didn't follow my own instincts. It turned out not happening [for me], and now it's one of the great movies of all time. The next time John called, I picked up the phone and went, "Whatever it is, John, yes!" It turned out to be Monsters, Inc.

Revisit What You Missed
I'm not caught up on what I'd like to read because I'm busy writing my memoir on turning 65 [on March 14, 2013]. But this summer I reread stuff from high school: Treasure Island is phenomenal! On the Road makes no more sense the second time around, but the style of it is so cool.

Phones Home, Please
I go to see every movie I can because it lets me catch up on my tweeting. God, I hate that! It's getting harder and harder to go to a theater without telling somebody, "Could you just turn that off?" I got furious one night on Broadway because I was doing my show [700 Sundays] and this woman in the third row was very clearly on the phone. So I started to play the show right toward her. I could read her lips: She was saying, "I have to go — he's looking at me!"

Facial Hair Holds Family Secrets
I just shaved my beard because we were doing some promotional shoots for Parental Guidance. I might grow it back while I write the book; the only thing is, now it's coming in so white! And then for some reason there's this little island of red. Nobody in my family had red hair — maybe it's an Eastern European curse or something?

Open Your Eyes
I once asked George Burns, "George, will you ever retire?" And he said, "To what?" So that's the attitude I want. At this age, man, I'm so happy to be working and see my kids thriving. When I look at all the goodness I'm around, I smile and go, "OK! I get it now!"

Celebrities galore, plus news and great deals on the AARP home page every day