En español | You don't need to read the books or see the films (The Twilight Saga: Breaking Dawn: Part 2 is the current, fifth and final movie — see the video above) to understand what your Twilight-obsessed daughter, granddaughter, colleague or beloved is talking about. With these basic details, you can join the conversation.

The original novel, Twilight, was released in 2005 with a targeted audience of teenage girls. First-time author Stephenie Meyer says the love story of a 17-year-old human girl and an irresistible teenage vampire came to her in a dream. Three more books — New Moon, Eclipse and Breaking Dawn — followed. Each was a No. 1 New York Times best-seller.

The film versions of Twilight, New Moon, Eclipse and Breaking Dawn: Part 1 set box office records and proved a draw for teenagers and their moms. The story's location, rural Forks, Wash., is a real place that's now a tourist destination for fans.

Edward Cullen: a 100+-year-old vampire who, as an immortal, is forever 17. Portrayed by British actor Robert Pattinson.

Jacob Black: Bella's childhood friend, a member of the Native American Quileutes tribe and a werewolf, played by Taylor Lautner, inevitably shirtless (see "Werewolves" on the next page).

Edward, who has never had a girlfriend (yes, he's a 100+-year-old virgin) unexpectedly falls in love with Bella, a human girl he wants to both protect and literally devour. As Edward declares to Bella in a scene that sends readers and movie audiences swooning, "The lion fell in love with the lamb." Jacob, who also loves and wants to protect Bella (mainly from vampires), challenges Edward for her affections. Fans take sides, being on either "Team Edward" or "Team Jacob." Bella knows that her two suitors are in essence monsters, but she doesn't care.

Carlisle Cullen: Edward's "dad" leads a family of moral, well-behaved vampires who are related by choice, not blood ... so to speak. Carlisle works as an emergency room doctor.

Esmé Cullen: Edward's "mom." The Cullens are vegetarians, which in the vampire world means they only drink the blood of animals.

Next Page: More vampires and werewolves. >> 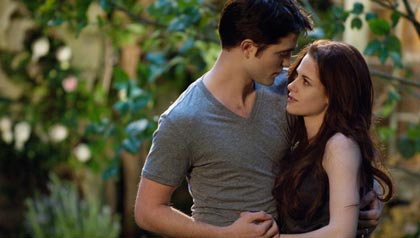 Rosalie, Emmett, Alice and Jasper Cullen: Edward's adopted vampire siblings who, despite their advanced ages (Jasper is a Civil War vet), pretend to be high school students. They relocate and matriculate often.

Renesmee Cullen: Bella and Edward's half-human, half-vampire "hybrid" offspring. Yes, spoiler alert to the few who don't know: Edward and Bella marry in Breaking Dawn: Part 1. They get pregnant during their honeymoon. (A big surprise since such interspecies conception was believed impossible.) Bella dies during a horrific delivery but, since she is married to a vampire, she's brought back to life — or, to be precise, eternal life.

The Volturi: These are the bad vampires. The Volturi live in Italy, hunt humans and enforce vampire laws, the main one of which is that vampires can't let humans know that vampires exist.

James, Victoria and Laurent: Three U.S.-based bad vampires. They hunt humans and want to feed on Bella because she smells so tasty. After the Cullens kill James and the wolves (see below) eat Laurent, Victoria builds a vampire army and seeks revenge. (She stars and shatters, literally, in the third book/film Eclipse.) Additional good and evil vampires arrive in Breaking Dawn: Part 2.

The Wolves: Members of the Quileutes tribe transform into massive wolves in order to protect humans from vampires. The Cullens and Quileutes have a decades-long truce that Bella and Edward's relationship threatens to undo.

Vampires: Vampires in the Twilight books are strong, fast, strikingly attractive and have marble-hard bodies. Unlike in most vampire stories, however, Twilight's vampires don't sleep, and they can be in sunlight without harm. Still, they avoid the sun by living in rainy places like Forks, because when sunlight touches their pale skin, they glitter. (Yup, they beautifully shimmer like they're covered in diamonds. Just play along.)

Werewolves: As revealed in New Moon, certain Quileutes can turn themselves into enormous wolves when vampires are near. Because they shred their clothing whenever they "phase" into their wolf forms and are always hot (in that they run a constant 108 degree temperature), the guys in the pack (there's one girl) are usually shirtless.

Special Skills: The wolves can communicate with one another through their thoughts. Edward can read minds (all except Bella's, which is a mystery that frustrates him greatly). Alice, Edward's sister, can see the future; Jasper can control people's emotions. The Volturi have supernatural powers that can inflict pain and reveal lifelong secrets. Even the formerly human Bella and the half-human Renesmee are gifted with special powers.

Are you intrigued? If so, you can start reading the books, or rent the first four films and then catch Breaking Dawn: Part 2 in theaters.

But be warned: For many, Twilight is addictive. If you become smitten, or bitten, you'll want to watch the five movies over and over again and read and re-read the novels and spinoffs — including Meyers' novella The Short Second Life of Bree Tanner and her unfinished but released draft of Midnight Sun, which is the original Twilight storyline but as told by Edward rather than Bella.

Hope you have free time to spare.

Melissa Stanton is an editor at AARP.org and shameless member of "Team Edward."