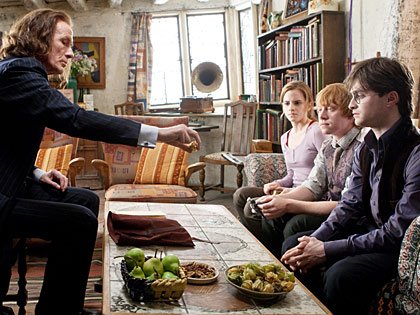 Well, you can't say they don't warn you before you enter the theater. There it is, right on the poster: This is only Part 1 of Harry Potter and the Deathly Hallows. Still, when Warner Bros. decided to split the final book of J.K. Rowling's wizardly series into two parts (it all comes to an end next summer), you'd think they would have figured a way to contain at least one story arc within Part 1’s two-and-a-half hours. Come on, boys, give us something to hold onto, some sliver of denouement among all the plots and plotting going on.

But no, Deathly Hallows: Part 1 comes to a crashing, random halt, like a nanny who's decided she's read enough tonight, and now it's time to take our castor oil and turn out the lights — even though she stopped reading just when the story was finally getting interesting.

For the record, Deathly Hallows: Part 1 is a handsome half-a-film, with spectacular special effects, one or two truly dizzying chase scenes and some lovely scenery shot in England and Wales. Young leads Daniel "Harry" Radcliffe, Rupert "Ron" Grint (looking surprisingly whiskery) and Emma "Hermione" Watson (looking very much like she's getting out of the plucky-young-girl racket just in time) do a lot of moping around, worrying about who likes who. The guys take their shirts off a few too many times, and there's a lot of running through the woods. Which is to say, it's too bad that the most singular film series of the past decade has chosen to go out looking like a Twilight wannabe.

Unlike the earlier installments, Deathly Hallows: Part 1 is also occasionally guilty of lazy storytelling. I won't spoil the surprise, but really, there must be a better way to depict the violent death of a beloved character than having a guy walk into the room and solemnly announce, "So-and-so's dead." And when our heroes set off on an epic trek across the English countryside, all we hear is how fed up they are with walking — when we've already seen that all they ever need to do when they really want to get somewhere is hold hands and utter some magic words ("Meka Leka Hi Meka Hiney Ho!"). Clearly, the only reason they're trudging along is to share with us their insecurities, which in my book would be minimal if I, like they, could hurl lightning bolts around.

Of course, people who know — that is, my daughter and her daughters, who have actually read the Potter books — tell me all this teenage angst is lifted right from the book, and it would be wrong to leave it out. To which I say, fine, but I don't think the book's publishers asked you to buy the first 200 pages of the novel, then made you shell out another wad of cash for the good part. I have an idea: Give moviegoers a perforated ticket. They use half of it now to see Deathly Hallows: Part 1, then turn in the other half for Part 2, where everyone presumably stops whining and actually starts hurling lightning bolts at each other. Yeah. I'm looking forward to that.