This true story of Captain Richard Phillips and his crew — pirates boarded their cargo ship off the Somali coast in 2009 — is a ripped-from-the-headlines film. The world watched as Phillips, abducted from the MV Maersk Alabama after its botched hijacking, drifted in a lifeboat with his captors, surrounded by U.S. warships.

In the news: Tom Hanks reveals he has diabetes. Did fluctuating weight play a role?

Director Paul Greengrass and writer Billy Ray are less interested in the well-known skeleton of the story than in its muscle and viscera. As he did in his superb 9/11 drama United 93, Greengrass spends equal time with the event's perpetrators and victims — not in a bid to justify the bad guys' actions, but to explore the clashes of culture that erupt in a world growing smaller by the day. 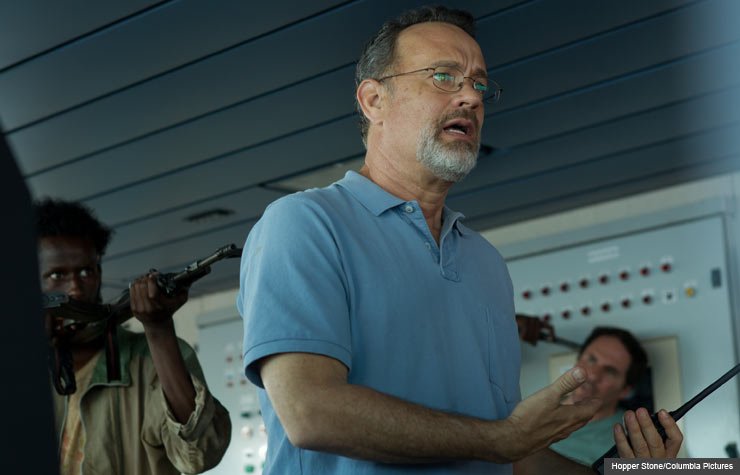 The pirates, it turns out, are in a sense being held hostage themselves.

Early in the film, machine gun-toting thugs working for a Somali warlord roll into a seaside town to enforce a harsh order from their boss: Men must head out to sea in rickety motorboats. Their quarry? Vulnerable cargo ships. It's a crude but effective means of doing business. Armed pirates board unprotected ships, demand a ransom, then bring the money or cargo back to the warlord. Judging from their ragged clothing and shabby dwellings, virtually none of those spoils winds up in the hands of the pirates themselves.

And so, on smooth seas and under a blue sky off the coast of Africa, Captain Phillips spots a ragtag collection of pirates bearing down on his enormous (and slow) container ship. The captain has a few clever diversionary tactics up his sleeve, but it's not really a fair fight: The pirates have guns, the ship only water cannons.

Up to the point where the pirates board the ship, Captain Phillips plies a steady, if unsurprising, course. As the captain, Tom Hanks gives a nicely restrained performance, his character's mounting dread barely visible beneath the veteran seaman's stoic exterior.

As for the Somalis, particularly the pirate captain Muse — played by Somali newcomer Barkhad Abdi — they're pretty much what we expect them to be: an undisciplined, argumentative collection of yammering cretins, guppies that have somehow commandeered a whale. It's here that Captain Phillips abruptly tacks in an unexpected direction, and it's a doozy: Phillips and Muse, who at first dismiss each other as simply two different kinds of exploiters, begin to size each other up.

Phillips sees in Muse a guy who, in a different world, might well captain something more grand than a leaky motorboat. (In a poignant scene, Muse stands on the captain's bridge, punching buttons and turning dials as he gamely tries to gain control of the ship.) And Muse begins to view Phillips as something more than the embodiment of a corrupt world order.

We're not talking mutual admiration here. Greengrass and Ray have too much respect for their audience to expect us to swallow Captain Phillips as a high-seas buddy picture. But as the two characters' worlds collide, we begin to see the ways in which world cultures, no matter how stratified, have no choice but to come to terms with one another.

For moviegoers, The Case of the Two Captains is fascinating for other reasons. In this corner, ladies and gentlemen, Tom Hanks — arguably the biggest movie star in the world, piloting yet another surefire Oscar-bait epic. And in that corner, young Barkhad Abdi — raised in the violent turmoil of Mogadishu, winner of a lottery that got him to the United States, and selected from an open-call audition in Minneapolis to costar in one of the year's most anticipated films.

How much of Abdi's mesmerizing performance is pure acting? And how much draws from his gritty, real-life experience? It doesn't really matter. Hanks, in a monumentally professional turn, happily shares the screen with this gaunt newcomer, forging the same two-way intensity he had with Denzel Washington in Philadelphia and Gary Sinise in Forrest Gump.

Captain Phillips' two-hours-plus zip by faster than a hydrofoil, but the time stands still — in a good way — for Hanks' final scene, an unforgettable portrayal of a man emerging from an ordeal with equal measures of shock, joy, horror and relief. Watch the montage of fleeting expressions that cross the man's face — and when this one comes out on home video, replay it again and again. Or give a second listen to the music of Hanks' voice — a cacophony both unintelligible and supremely descriptive.

When applied like this, the screen actor's art trumps a million bucks' worth of special effects any day.