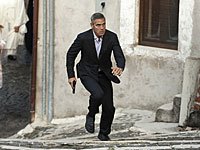 En español  |  I know these three things are true in the movies: The cop who’s three days away from retirement is going to meet a bad end…the charismatic business executive who has vowed to serve humanity will be responsible for mass murder…and the paid assassin who’s doing “one last job” will soon himself be dodging bullets.

So when George Clooney, as a hit man in hiding in The American, barks the words “I’m out!” to his angular-faced boss (Johan Leysen), you know there’s very little chance he’ll be rolling over his 401(k) to an individual retirement account.

That’s why The American has no right to be as compelling as it is. But thanks to a taut performance by Clooney, restrained direction by Anton Corbijn and breathtaking camerawork by Martin Ruhe, the film winds its spring unbearably tight, then slowly releases the tension, ticking along at a measured pace, unhurried but relentless.

Clooney plays Jack, whose cold-blooded bona fides are shockingly displayed even before the title rolls. Jack is a guy who kills as easily as he breathes; it’s simply what he does, and after an apparent lifetime of it, he’s only now beginning to wonder if there’s something wrong with that. He takes one last job (there you go), one that doesn’t even involve pulling a trigger. Instead, he’s hired to build a high-powered assassin’s rifle for a beautiful, mysterious woman (Thekla Reuten). Jack turns his rented room at a remote Italian pensione into a machine shop, and for a time director Corbijn turns the film into a detailed tutorial on weapon-making. The precise business of boring holes, sawing metal tubes and filing down trigger releases is filmed in stark close-up, and at some length. It ought to bring the film to a screeching halt, but as in a Hemingway narrative, the details bring authenticity to the movie, and help define Jack as not just a killer, but a craftsman.

The American takes many such detours. Jack likes to sit and sip coffee and go for long walks through the narrow streets of the impossibly picturesque medieval town of Castel del Monte, in Abruzzo. We tag along for many of those outings, seemingly in real time. We learn early on that anyone who thinks they’re Jack’s friend might as well paint crosshairs on their forehead. So we begin to worry for the wonderful people he encounters in the village, particularly the local priest (rotund, reflective Paolo Bonacelli) who seems to ask too many questions and have too many insights into Jack’s true nature. When Jack takes a shine to a local prostitute (Violante Placido), we fret for her as well. We’d actually like to spend more time with all of these people — played by an engaging cast of actors, well-known in Europe but virtually unknown on these shores, who deserve to find more time on American screens.

That taut spring that powers The American gets kind of floppy toward the end — the flurry of activity in the last 10 minutes seems more a rationale for finally stopping the cameras than a reasoned conclusion. But it doesn’t matter too much, because at the film’s center stands a Clooney we see too little of these days. Clooney’s superstar screen persona — the wisecracking, easy-smiling, boyish charmer — is buried but never quite forgotten, so when Jack begins to show the first hints of a smile, only to self-consciously take it back, we ache all the more for his yearning to become, at long last, human. Like another figure who found trouble in an Italian village, despite his wooden heart, Jack longs to become a real boy.