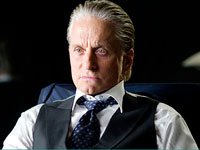 There are many things to like about Wall Street: Money Never Sleeps, the sequel to director Oliver Stone's 1987 morality play about greed and its consequences. First there's Michael Douglas reprising the role of Gordon Gekko, the insider trader recently released from prison. Douglas skillfully navigates Gekko's complex emotional waters as he professes to be humbled by his eight-year Sing- Sing sabbatical while secretly burning with desire to get back in the game. Then there's Frank Langella, unbearably sad as the big-time banker whose chickens come home to roost as Wall Street lays one enormous egg. But best of all is the almost sacred presence of the great Eli Wallach, all 94 years of him, as the investment community's elder statesman, his Yoda-like face peering up from his wondrously bent frame, delivering lines with the precision of an old-timey bank teller snapping out hundred dollar bills.

There are movies that just seem eerily prescient. The China Syndrome brought its nuclear meltdown to the screen just weeks before Three Mile Island went kablooey. In Wall Street the first, Gekko's clarion call "Greed is good" — meant by Stone to be heard as a cautionary jolt — became a rallying cry for the decade that followed. Money Never Sleeps would like to consider itself in that company, but the story is set two years ago, just before the latest Wall Street collapse, and so it loses much of the currency it tries to claim. The consequences of unfettered credit and consumer excess, predicted here by characters living in 2008, have already come back to bite us in real life.

So that leaves us to fret about the characters' personal conflicts. Gekko, cocky as he is, still wants to reconnect with Winnie (Carey Mulligan), the daughter who grew up while he was behind bars. While professing to hate everything her dad stood for, Winnie has nevertheless taken up with Jake, a young Wall Street hotshot (Shia LaBeouf) who just so happens to be the only being in Lower Manhattan with a working sense of humanity. As his brokerage house collapses around him, Jake vows to take financial revenge on those who targeted his firm for destruction and, as collateral damage, caused the tragic downfall of his mentor (Langella).

Stone gives his stars some lovely, intimate scenes together: Jake's gentle kiss on the head of Langella's tortured executive is an unexpectedly sweet touch, and a father-daughter moment on the steps of the Metropolitan Museum of Art resonates with authenticity as Douglas, perhaps drawing on his own long, sad, family history, pours out his character's secret sorrow.

At times Money Never Sleeps seems to be a collection of very good moments strung together by a rather pedestrian theme: Money can't buy happiness. Too often the characters find themselves in front of rapt audiences, speaking truth from their hearts, when those lines would have seemed much more genuine had the writers put them in more intimate, personal settings. Still, for those who fondly remember the strutting Gordon Gekko of 23 years ago, Money Never Sleeps is a nice little stroll down memory lane, even if for several characters that stroll is, just like last time, a perp walk.