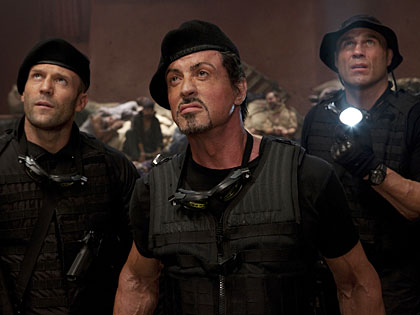 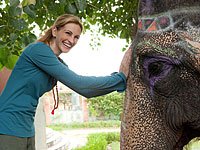 Eat Pray Love: Where would you go? Discuss

En español  |  So, what'll it be: a shot of testosterone or an overdose of estrogen? In The Expendables, Sylvester Stallone, all eyes and lips, darts from shadow to shadow, automatic weapon in hand, in search of a villain (and any villain will do) to blow to smithereens.

In Eat Pray Love, Julia Roberts, all eyes and lips, flounces her way around the globe, fork in hand, in search of her middle-aged self. He's coming to terms with a lifetime of mercenary violence. She's questioning everything she's ever believed. He finds wisdom from a burned-out tattoo artist. She encounters a thoughtful old fella who helps put it all into focus. He discovers the woman of his dreams on an exotic Caribbean island. She roams all the way to Bali before she finds her soul mate.
In short, The Expendables and Eat Pray Love are the very same movie. Up to a point.

"Mayhem" would be the word to describe the spirit of The Expendables in the same way "dust-up" would be the word to describe the Second World War. For there is so much carnage, so very much grotesque disfigurement, so incredibly much destruction in any given five minutes of The Expendables that by the film's end I would have been unsurprised to find, in the place of chewed bubble gum, human entrails on the theater floor.

The Expendables delivers precisely what it promises, which is to say the cinematic equivalent of a rocket-fuel-laden tanker truck plowing into the mixing room of a nitroglycerine factory. Stallone, who I’ve always felt is underrated as a bread-and-butter filmmaker, propels his story smartly from one überviolent set piece to another. Shotgunned bodies bisect with alarming ease, severed limbs fly like shrimp at Benihana, fireballs erupt as if the very gates of Hell have been cracked open.

We're not too many steps here beyond the stylized grotesqueries of Quentin Tarantino's Kill Bill movies, and Stallone does a nice job of approximating QT's winking acknowledgement that it's all a bit too much, isn't it? The only real acting here comes from a wonderful Mickey Rourke as a pipe-smoking tattoo artist and former member of Stallone's crew. The film comes to a screeching halt for his remarkable monologue about regret and redemption. At its end, Stallone, now convinced he must act on a humanitarian impulse rather than a mercenary one, backs silently, respectfully from the room. It's a nice coda to a small gem of a scene.

But really, excess is what The Expendables is all about. I would guess the body-count numbers in the hundreds, and they all die, one at a time, at the hands of a who’s who of action stars both old and new: Jet Li, Dolph Lundgren, Transporter star Jason Statham, and Everybody Hates Chris costar Terry Crews, who has the best character name of all: "Hale Caesar."  Much has been made of the cameo appearances of Bruce Willis and Arnold Schwarzenegger: Their short scene together at the film's start is a priceless piece of film history, a summit meeting of the past 30 years' biggest action stars, each of whom rewrote the genre in his own way. It lasts but a moment, and the editing makes it appear the three might never have actually been on the same set at the same time; but it is electric nonetheless, a classy appetizer before Stallone plops down in front of us his bloody, raw main course. 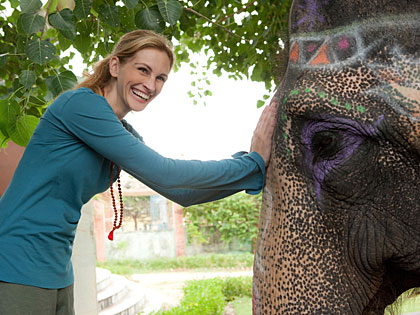 Which brings us to Eat Pray Love, an unapologetic buffet offering one main course after another, and which offers us, in place of The Expendables' buckets of blood, lots and lots of tomato sauce. It’s based on a memoir that was read by virtually every woman I know, and even those who didn't like it tell me they sympathized with author Elizabeth Gilbert's desire to find spiritual and temporal balance in her life. Here Gilbert's onscreen stand-in is Julia Roberts, whose star power blazes at first magnitude as she treks from New York (leaving behind a heartbroken ex-hubby and devastated ex-boyfriend — and you would be, too, if Julia Roberts dumped you) to Italy to explore the art of pleasure. Then she's off to an Indian ashram to discover the secrets of spiritual devotion, and finally to Bali to find a way to balance the two.

There's some love along the way, and a little bit of praying, but it's the "Eat" in the title that gets the most attention, like a neon sign in the window of an all-night diner. Roberts and company are always eating. And if they're not eating, they're cooking. Or they're checking out what some other person is having. Where most directors would simply cut from one scene to another, between narrative stretches Ryan Murphy shoves our noses into herbs and raw vegetables being chopped on boards, plates heaped with spaghetti, slices of cheese-dripped pizza, platters of exotic South Seas cuisine, and on and on. At one point Roberts's character confides that she's gained 10 pounds (she's a good actress, but it sounds and looks like a lie).

The orgy of eating, globe-hopping, and self-indulgent navel gazing is interrupted with a few nice scenes of authentic emotion. Most memorable is a piece near the end, when the heroine's new friend Richard — played by the always-thoughtful Richard Jenkins — pours his heart out to her on the ashram roof. He tells her a heartbreaking story from his past and convinces her that she, like him, needs to find a way to forgive herself for the hurt she's inflicted upon others, particularly her former husband. For Liz, it should be a moment of epiphany, but when Richard leaves her alone and she has an imaginary conversation with her far-away ex, she tells him, in essence, "Hey, I've forgiven myself. Get over it!"

Which is where Eat Pray Love and The Expendables depart from their parallel paths. Sylvester Stallone learns a lesson in humanity, and Julia Roberts doesn't. Who'da thunk it?