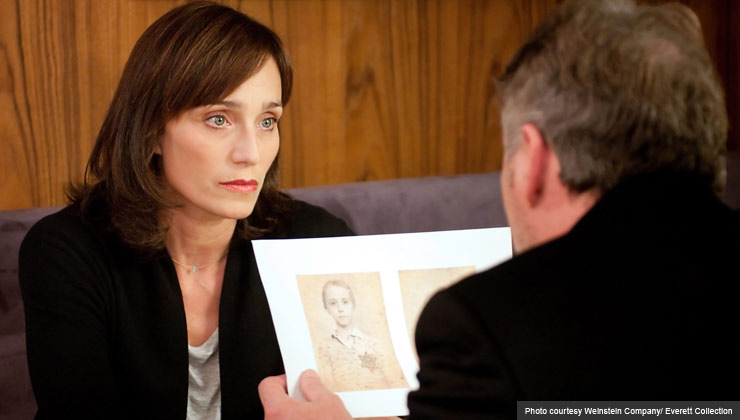 En español  |  I wish I could say you'll emerge from Sarah's Key inspired by the plucky little French girl who defies everyone and everything — up to and including the Nazi and Vichy regimes — to escape from a death camp and try to save her little brother … or that you'll be warmed by the steadfast determination of a modern-day reporter (Kristin Scott Thomas) who nearly lets her own life unravel as she relentlessly pursues the true story of what ultimately happened to Sarah.

See also: A look at the documentary, A Film Unfinished.

But I'm betting you won’t find yourself taking refuge in either of those affirming attitudes. That's because Sarah's Key is a sad, sad movie, and almost defiantly so. A cloud of somber melancholy hangs over every word spoken, every dark-eyed glance. We don't for one second doubt the fate that awaits the thousands of French Jews who, in the film's opening minutes, are dragged from their Paris homes and locked up in an indoor arena. Even those who make tiny gestures of kindness to the condemned do so with a profound sense of futility, as if their small acts of humanity are being swallowed into an overwhelmingly dark, bottomless vortex of evil.

Does the story Sarah's Key need to be told? It's not, after all, a true story, although there were doubtless untold thousands of real-life Sarahs who perished in the season of madness that fell over Europe in the 1930s and 40s. Writer/director Gilles Paquet-Brenner certainly thinks the world needs to be reminded of this awful historical chapter — and the reason is reflected in the young journalists with whom Scott Thomas's character works, privileged 20-somethings who have no inkling how French gentiles turned on their Jewish countrymen to sate the bloodlust of their occupiers.

"This was not the Nazis," she lectures her colleagues. "It was the French.

Sarah's Key aims to crack your skull with a truncheon and stomp on your blistered hands with a grinding leather boot. Good people suffer and die, bad people walk blithely away, and generations are left to make some sense of the senseless. Scott Thomas portrays well that whirl of confusion, as well as the accompanying suspicion that uncovering the truth will only rip open old wounds to no useful purpose. Her character suffers personal loss in her pursuit of the truth, and more than once others ask her if the cost is worth it. Even at the end, when a glimmer of hope is held out for the reporter's future happiness, with one quick glimpse of an empty baby stroller director Paquet-Brenner reminds us that all the things that bring joy can disappear in an instant. It's the shadows of sadness and loss that linger, and in that darkness we all must strike our own fleeting sparks of light.