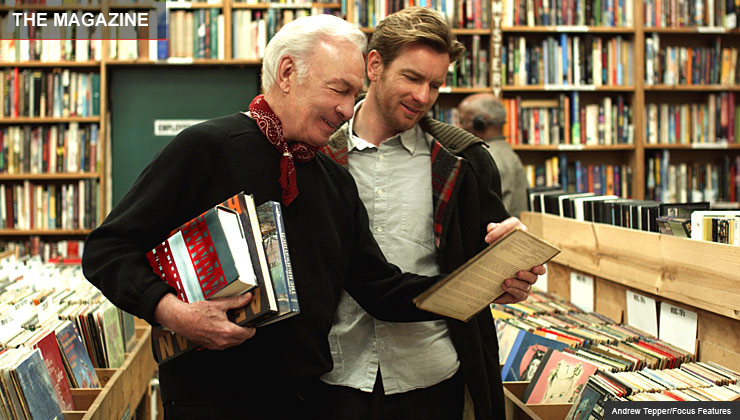 En español  |  I think I know just about everything I need to know … want to know … about my dad. At 93, he probably still has a few surprises up his sleeve, but I think we’re going to let well enough alone. Parents, after all, are more than just the sources of our early sustenance. If we’re lucky enough to have them around, they play pivotal roles in the dramas of our lives, either at center stage during childhood or later making occasional, if critical, cameo appearances, striding in with great aplomb, like Bob Hope on The Tonight Show. The last thing we want, ever, is for them to step out of character.

See also: The gay man's guide to dating after 50.

Such is the dilemma faced by Oliver (Ewan McGregor). When we meet him at the start of Beginners, he is understandably saddened by the recent loss of his father Hal (Christopher Plummer), but also somewhat confused. Through flashback, we learn why: On the same day Hal broke the news to Oliver that he had a deadly cancer, he dropped another interesting tidbit: He was gay. Plus, he had known he was gay all through his marriage to Oliver’s late mother. And he now had a lover.

And so, as Hal’s days dwindle, Oliver must not only come to terms with his father’s impending death — he is also in a race against time to become acquainted with this man he thought he knew. Dad, too, is in a race of sorts. After having lived a life of repressed emotion — his marriage was not without love, but it was certainly without passion — he sees the same mindset in Oliver, and in his endless string of aborted romances. Hal sets out to instill in Oliver the joie de vivre that Hal never before allowed himself to experience.

It’s not until Hal has died that Oliver, still in a funk over all that’s transpired, finally dangles his toes in the waters of romantic commitment — with a lovely French actress (Mélanie Laurent) who has suddenly parachuted into his life. Trouble is, she’s just as commitment-averse as Oliver.

If all this sounds horribly melodramatic, the biggest surprise of Beginners is how much fun it all is. Director/screenwriter Mike Mills—basing the story on his own experience with his father—has a delightfully off-kilter way of telling his story in flashbacks, side trips and occasional slide shows. Oliver even has some charming conversations with his dad’s Jack Russell terrier, which come off not as cloying, but as the sort of man-to-dog chats you’d expect from a fellow with no friends to speak of.

The story is told from Oliver’s perspective, but it is Plummer, twinkly eyed and awestruck at the world he’s just discovered, who gives Beginners its energy. In the end, the movie isn’t about being gay, or discovering your dad is gay. It’s about taking risks for love — love for your parent, for your child, for the one who was not there yesterday, who is today and who, just maybe, will still be tomorrow. Stumbling among revelations, misunderstandings and moments of exquisite silence, Beginners’ characters come to understand that although past performance is no guarantee of future yield, love is the one investment that becomes its own dividend.