John Turturro, who has made a career of bringing soulful vulnerability to desperate loners, is now immersed in a midlife exploration of Italy, his ancestral land. In 2009, the Queens-born actor appeared in and helped produce a documentary on Sicily that premiered at the Venice Film Festival. Last year he toured Italy in a play that he directed, performed in and freely adapted from Italian folk tales.

This summer will see the U.S. release of Passione, a documentary Turturro directed on Neapolitan song that he calls an endless jukebox of past and present-day Naples. Many of the songs, including a few old classics, are staged as musical theater on gritty streets and back alleys.

We caught up with the 54-year-old Turturro in Brooklyn, where he lives with his wife, actress Katherine Borowitz, and his youngest son, Diego.

Q: Any reflections on passing The Big Five-Oh?

A: Everybody gets bored when they hit the midcentury mark. I was thinking of changing careers and going to med school. I talked to my doctor about it.  Sadly, he said I was too old. It was a passing phase.

A: He's got a point. But I think age makes you less combative, and more conscious.

Q: Made any significant life changes?

A: I'm learning Italian. Learning a new language is a nice way to improve yourself as a person. Your ego is not involved and, because you're a student, you feel young again.

Q: How has filmmaking changed over the last five years?

A: The biggest difference is that there aren't as many movies, and the medium-sized ones are no longer being made. Everything is either a small-budget indie or a studio blockbuster. And every story is about 20-year-olds. It's like your life is over by the time you're 27. When I was a kid, I went to movie theaters to see adults on the screen. Now about all you see is kids playing grownups. Everybody looks like a girl or a boy.

Q: You have said that you hope Passione will do for Neapolitan music what the 1999 documentary Buena Vista Social Club did for Cuban song.

A: In Naples, you see all the problems of the world — in the past, present and future. There's danger, corruption, betrayal, hunger, natural disaster, all juxtaposed against an irrepressible creative spirit that has produced an avalanche of music throughout the ages.

Next: Fantasizing about being a professional athlete. >>

Q: You grew up idolizing tough guys like Burt Lancaster and Kirk Douglas. What are your favorite films?

A: In no particular order: City For Conquest, Key Largo, Miracle in Milan, Rules of the Game, The Seven Samurai, The Bicycle Thief, Red Shoes, On the Waterfront, Spartacus, The Leopard, Nights of Cabiria.

Q: Al Pacino and Dustin Hoffman are among the prominent older movie actors who have recently gravitated to television. How about you?

A: TV is now a more mature medium than film. I've been offered TV series, but I don't want to be on a cop show and solve a crime every week. I have nothing against those shows. I just don't watch that much TV. But you never know, and there's a lot of excellent work being done on television.

Q: What do you like to do when you're not working?

A: Sleep.  Have sex.  Sleep.  Eat.  Read.  Play basketball.  Watch sports on TV and fantasize that I could have been a professional athlete.

Q: Later this year you'll appear with your wife, Kathie, in Somewhere Tonight, an urban fable about a bike messenger and a shut-in who find each other over an adult chat line. What's working with Kathie like?

A: Not bad, sometimes very good.  We've learned how to work as director and actor. It took awhile but it's now actually enjoyable. You just have to learn how to separate the personal from the professional.

Q: Your son Diego toured with you in Italy. Does he want to pursue a career in theater?

A: He'd like to be a director so he could fire me.

Q: You're a big fan of the playwright Samuel Beckett, whose credo was Fail Better.

A: That's not a bad way to live. You inevitably fail, but at least you've tried. That's the kind of perspective age can offer. This is a very fertile period in my life and I want to use the time I have left to do things I really love. I'm looking for new horizons. 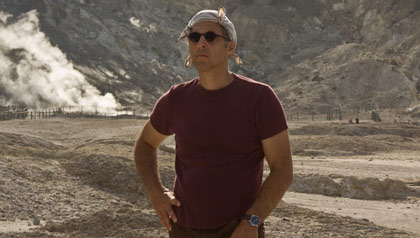 "This is a very fertile period in my life and I want to use the time I have left to do things I really love. I'm looking for new horizons," John Turturro says.