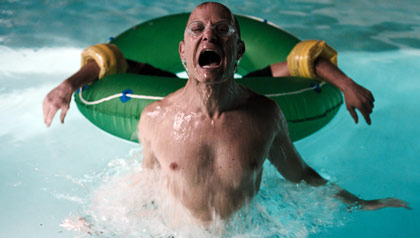 Moments before we began to chat, David Hyde Pierce was sitting at the piano in his New York apartment. But don't go asking to hear him play. For that, the four-time Emmy-winning Frasier costar reserves the most exclusive audience imaginable: himself.

"I almost never play for other people," he said. "I play for myself, and it makes me very happy.

"Just now when the phone rang, I was playing some Bach and some Beethoven. I have a beautiful piano here and one in my home in Los Angeles, and any time I can steal a few moments, I play."

Well, I thought, that's just perfect. Although interviews with celebrities are fun in person, on the phone you get to envision them not as they really are — regular folks puttering around their apartments, making breakfast, dropping their newspapers into their eggs — but instead as you've imagined them. So sight unseen, David Hyde Pierce remained, of course, TV's Niles Crane, fastidiously tugging at his tie, nervously reviewing his day planner, stealing a private moment with Johann Sebastian and Ludwig van before venturing nervously out into the world.

Except for one thing: I'd just seen Pierce in his new movie, a psychological thriller called The Perfect Host, which comes to Video on Demand this week and to theaters in July. Unfortunately, I can't say much without ruining the whole thing. Suffice to say, Pierce's character, Warwick Wilson, starts out pretty much the fluttery fellow you'd expect him to be. But before long he turns out to be something very, very different. And a bit later, he's something very different from that. And before long you don't really know what to expect from the guy next, and that's what makes The Perfect Host the perfect cinematic brain twister.

It's also a challenge for Pierce, who knows he has a loyal body of fans for whom seeing him as anything other than Niles, even seven years after Frasier left the air, could be distressing.

"Certainly, to have had a show that was on for so long, and a character who was so successful that you carry it with you, is a wonderful problem to have," he said.

"After Frasier ended I went back to the theater, where I started out. Theater audiences are much more used to seeing people play very different kinds of roles. So in the theater, I've been able to very easily break away from Niles.

"However, in films, or if I were to do television again, I have to be very selective. I have to find something that enables me to walk that line between respecting and understanding how people are used to seeing me — while also finding something that's different and interesting for me to do."

Next: "I thought I was going to be a concert pianist." >>

Which brings us to Warwick, a genteel, impeccably dressed bachelor who, while preparing to host a dinner party one night, finds his home invaded by a desperate, violent bank robber, played by Clayne Crawford.

Pierce has had the big-budget movie experience in films such as Sleepless in Seattle (as Meg Ryan's older brother) and Oliver Stone's Nixon (as John Dean). But The Perfect Host is a tight little independent film. First time writer-director Nick Tomnay keeps his focus and setting claustrophobically narrow as Pierce and Crawford spend much of the movie very much in each other's face, jockeying back and forth for the psychological and physical upper hand. It's a style that recalls the great two-character mysteries of old, films such as Sleuth with Michael Caine and Laurence Olivier, and Death Trap, with Caine and Christopher Reeve.

"The Perfect Host was a 17-day shoot," said Pierce. "When you are in good hands with a good director, as we were, that can be an incredibly creative, wonderful process. I loved that.

"I've had a very enjoyable time on big studio films, but as an actor I don't like the extra time you have when there's extra money. A film like this is very actor-friendly because you spend more of your time actually doing your job instead of sitting in a trailer while they relight, or standing in front of a green screen and pretending to be acting with something that's going to be put in later on."

Broadway is Pierce's real home: He won a Tony for the musical Curtains in 2007, and he's about to direct his first musical, It Shoulda Been You, starring Tyne Daly. So he doesn't have to give much thought to what field he'll be working in for the next several decades. He is, of course, that rarity in show biz: The guy who made it big. What if Pierce, the pride of Saratoga Springs High School in upstate New York, had instead been one of the vast majority of talented guys who never got a break? What if his old friend from Yale, director-star Jodie Foster, hadn't remembered him back in 1991 when she was casting her movie Little Man Tate? What if the producers of Frasier hadn't noticed his uncanny resemblance, in appearance and manner, to their star, Kelsey Grammer, and created the role of Niles just for him?

"It's a good question," he says. "Who knows what else I would have done? When I set out I thought I was going to be a concert pianist. At college that was the track I thought I was on. But I didn't have the talent, and I didn't have the drive. There's a need for discipline and drive and a willingness to be alone. It's a very specific set of gifts — none of which were in my particular tool kit.

"So I think I fell into exactly the right thing.