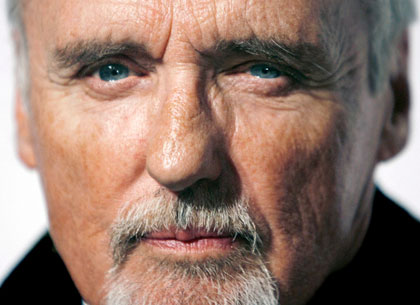 I crashed Dennis Hopper's wedding party in 1996. OK, I had been invited, sort of: An editor at a style magazine had asked me to join her at the reception at Julian Schnabel's home in the Meat Packing District in Manhattan. Victoria Duffy, the fifth Mrs. Hopper, was interested in having pictures from the reception appear in the magazine, and the editor wanted me to write the text.

Except when I arrived, there was a message from my friend. She wasn't going to be able to make it, she told me when I called, but I should go in and enjoy myself and take some notes — albeit discreetly. "Schnabel hates reporters," she said, "so you might not want to pull out your notebook."

This would have been intimidating enough at any wedding party where I didn't know anyone, but here I didn't know a single person — and even while recognizing many. There was James Coburn, Iman, Dominick Dunne, Roddy McDowall, Leo Castelli — all in the most interesting pairings, huddled at dining tables in Schnabel's massive studio while Celia Cruz serenaded the crowd.

"I saw Norman Mailer talking to Allen Ginsberg!" Hopper told me over the phone the following day. "Wouldn't you love to know what they were talking about, man?"

I sure would, man — but they're dead now, and so is Hopper. What struck me that evening was what a connector the man was; these stars of the film, art and literary worlds were all orbiting around him because he was such a practitioner of mixed media: actor, director, photographer, painter. (Schnabel, who's become a fine film director himself, went on to curate a show of Hopper's paintings for an exhibit that opens July 11 at Los Angeles' Museum of Contemporary Art.) Kevin Bacon had nothing on him in the six-degrees-of-separation stakes.

Hopper changed his acting approach when he famously crossed paths with Lee Strasberg disciple James Dean in the 1950s — but all that method ultimately seemed overwhelmed by his personal madness. He was in a number of iconic films ("Rebel Without a Cause," "Cool Hand Luke"), but no one really noticed him until he grabbed the lens, and most of the attention, in the ultimate 1960s' fugue-state road flick, "Easy Rider."

In Peter Biskind’s book Easy Riders, Raging Bulls: How the Sex, Drugs and Rock ‘n’ Roll Generation Saved Hollywood, director and co-star Hopper comes off as more than a few tokes over the line during the maniacal making of the film. He screamed at everyone, fought with producer and co-star Peter Fonda over everything, drove Rip Torn off the picture, denied Terry Southern rightful writing credit, told each photographer in New Orleans that he or she was first camera, and turned down Crosby, Stills & Nash's offer to do the soundtrack. (He told Stephen Stills: "Anyone who rides around in a limo can't comprehend my movie.")

But despite all his best efforts to screw it up, "Easy Rider" was a phenomenal success, and the celebrity and acclaim that followed nearly destroyed him. As Biskind wrote: "He may have started down the slippery slope to megalomania and grandiloquence on his own, but he had plenty of help."

Within a few years, he was a fallen Icarus; his 1971 magnum opus "The Last Movie" was nearly his last movie, and his long strange trip ended in the early '80s when he was arrested, strung out and naked, in Mexico and finally forced into rehab. Few Hollywood meltdowns were as spectacular.

He climbed down from the ledge, of course, and in sobriety made some keen use of his inner rage and weirdness (most notably as the creature from David Lynch's id in 1986's "Blue Velvet"). But even in the edgy roles seemingly designed for him, his acting was too often strident and over-the-top: He was like that talky hippie guy you were afraid of getting stuck next to on the bus. Plus he seemed to have no discernment and once claimed that he took any role offered him.

Which brings us back to his marriages. (His shortest, to Michelle Phillips, lasted a week.) Though there were a few crazy egos on display that evening at Schnabel's 15 years ago, none of them was his. Hopper looked like a man in full, his beautiful young bride on his arm, celebrated artists, writers and actors all around him. There were too few of his Hollywood pals, he explained to me later: They'd had another reception in L.A., he said, that featured more of his Hollywood pals.

"All my other friends are working," he said, and then added with a laugh: "Either working or dead."

Mr. Hopper is no longer working.