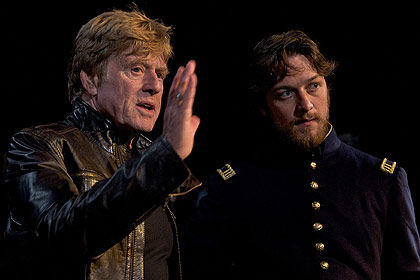 En español  |  As a director, Robert Redford likes to disassemble things. In his Oscar-winning debut, Ordinary People, he brilliantly dissected a family on the brink of collapse. More recently, in Lions for Lambs, he rather clumsily attempted to break down the workings of the military-industrial complex.

At AARP's 'Movies for Grownups' Awards, Robert Redford describes his unusual personal take on American history and how it has inspired his moviemaking.  More from Robert Redford, and Bill Newcott's complete audio review of The Conspirator. Listen

With The Conspirator, Redford is back in excellent form, meticulously breaking down the surprisingly elaborate conspiracy behind the assassination of Abraham Lincoln. Historians know, but I’m not sure how many of the rest of us do, that John Wilkes Booth was only one cog in a great “decapitation plot” to destabilize the United States government in a single blood-drenched night: A coconspirator stabbed Secretary of State William H. Seward nearly to death, and another chickened out of his planned assassination of Vice President Andrew Johnson.

These three, and a handful of fellow conspirators, plotted their deeds at a Washington, D.C., boarding house owned by Mary Surratt (curiously, the house still stands a block from where I write this — it’s now an Asian restaurant called Wok and Roll). The Conspirator focuses on Surratt’s culpability in the plot, and it all comes down to a familiar question: What did she know, and when did she know it?

It’s a question that never gets a satisfactory answer in The Conspirator — by design, I think. At its best the film examines the curious relationship between Suratt (an inscrutable Robin Wright) and her reluctant attorney, Frederick Aiken (an open-faced James McAvoy). As Surratt, Wright professes her innocence with at times irritating coolness. It’s easy to associate her stoic stance with sincerity, as her young lawyer occasionally does. But each time Aiken seems ready to fall headlong into unrestrained allegiance to his client, Redford does a nice job of introducing a shard of evidence, or a nagging inconsistency, that once more raises doubts. In fact, as Redford skillfully lays out both the defense and prosecution cases (much of the dialogue is taken directly from the original trial transcripts), what’s most striking for a 20th-century viewer is the quality of evidence that it was possible to collect more than a century before anyone dreamed of CSI: Miami (Can’t you just see David Caruso pushing up his Ray-Bans and muttering, “Other than that, Mrs. Lincoln … how did you like the play?”).

History has pretty much settled on the notion that Suratt was, to quote the jury foreman in Mel Brooks’s The Producers, “incredibly guilty.” Redford doesn’t really take issue with that — although he can’t help but occasionally tip his directorial hand in favor of the accused. He’s mostly interested in depicting the government’s over-the-top efforts to ensure Surratt’s conviction: The prosecution stacks the deck so overwhelmingly against her through procedural tricks, suppression of evidence and flat-out cheating, that Mary Todd Lincoln herself would have had a hard time getting out of that courtroom alive. It’s true that Redford at times slathers on the Guantanamo/Abu Ghraib parallels with all the subtlety of a Civil War surgeon. And although Kevin Kline, as Secretary of War Edwin Stanton, seems calculatingly heartless in his treatment of Surratt, Redford does allow him to voice Stanton’s patriotic motivation: The assassins had hoped to inspire Southerners to rally ’round the Confederacy one last time. To wait for a drawn-out civil trial of the conspirators, he reasoned, would immeasurably serve that purpose.

Redford doesn’t question the sincerity of Stanton, Johnson or the military tribunal that sentenced Mary Surratt to death. What vexes him is the occasional willingness of people to sacrifice their freedoms in the face of crisis. You can reject the direction in which Redford heads with his hypothesis, but there’s no denying that the questions that arose over the bleeding body of Abraham Lincoln still hang in the air today.