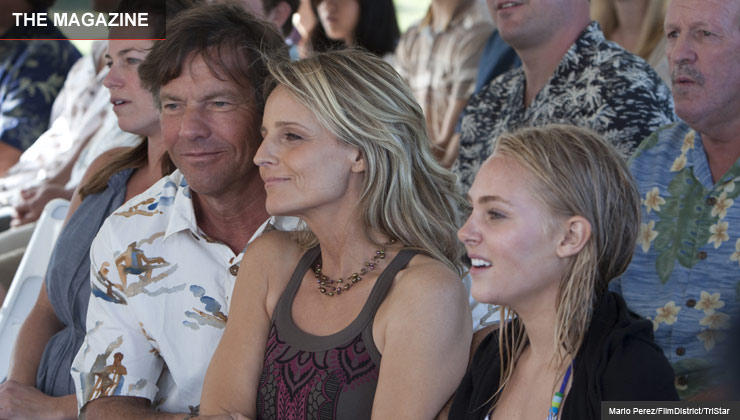 Photo by Mario Perez. Courtesy of FilmDistrict and TriStar

En español  |  If Soul Surfer weren’t based on a true story, audiences would never believe it.  But the larger problem with director/screenwriter Sean McNamara’s film version of the 2003 shark attack that took 13-year-old Bethany Hamilton’s left arm but failed to steal her indomitable spirit is that it is so riddled with clichés — in the dialogue and in the character portrayals — that its authentic message almost gets lost.

See also: What film took the top prize at our Movies for Grownups Awards Gala?

The film begins with Hamilton (played by the appealing AnnaSophia Robb of Race to Witch Mountain) explaining in voiceover how she was born to surf. That’s because she’s the daughter of Tom and Cheri Hamilton — McNamara’s casting of Dennis Quaid and Helen Hunt in the parent roles was brilliant — who moved to Kauai from the mainland to share their love of the water with their children (including two teenage boys, Timmy and Noah).  Next scene is young Bethany, on the verge of going pro, having just won sponsorship from the surf- and ski-wear manufacturer Rip Curl.  Then, that fateful Halloween morning, as she chats with her best friend Alana Blanchard (played by Jack Nicholson’s up-and-coming actress daughter, Lorraine Nicholson) while they straddle their boards in the Hawaiian surf, a 14-foot tiger shark mistakes her for his next meal. Bethany loses more than 60 percent of her blood in the attack, and that she survives — thanks in part to the quick thinking of Alana’s dad, Holt (Kevin Sorbo), who wraps a tourniquet around the wound and hustles her out of the water — is, according to her doctor (played by Craig T. Nelson), nothing short of a miracle.

The rest of Soul Surfer (which bears the same title as Hamilton’s bestselling memoir, published in 2004) is a recounting of Bethany’s journey to reclaim — no, embrace — her identity, now with a changed body. Within a month of the attack, she gets back in the ocean, determined to return to surfing. Frustrated by the effort to adapt to the sport with one arm, she threatens at one point to quit, but ultimately perseveres, eventually going on to become one of the world’s top female pro surfers today.  She does this because she’s a feisty and courageous person, backed by a supportive and close-knit family and community who share an abiding religious faith.

To his credit, McNamara doesn’t underplay the role Christianity plays in this story, but he presents it in stereotypical fashion. Case in point: Bethany, at a low point, seeks out her youth minister, played by a robotic Carrie Underwood (the country-music star, in her feature film debut, at the outdoor church where they worship and asks why God allows bad things to happen. The answer Underwood condescendingly offers is that from struggle comes something good. Really? Always? McNamara also presents Bethany’s turning points, and her family’s cheerleader-like devotion to her, in such one-dimensional ways as to make key moments in the drama almost laughable. At a beach in tsunami-ravaged Phuket, Thailand, where she has travelled with her Christian youth group in early 2004 to offer relief, Bethany tries to quell the fears of a forlorn local child by beckoning him onto a board in the water, and suddenly realizes that life is not just about surfing but about loving others. Duh. And in her bedroom, after snapping the arm off of one of her Barbie dolls, Bethany whines to her mother that no boy will ever want her the way she is, to which Cheri somehow satisfyingly responds that the “right” boy will.  Oh yeah?  I’m not so sure the viewer will buy it.

The epiphanies here — and there are many of them — are arrived at far too simply.

To be fair, Soul Surfer isn’t always clunky. The surfing scenes — some with Hamilton serving as a double — and island cinematography are compelling. The shark attack is quick enough to be both scary and thrilling.  Quaid and Hunt, all grown up with wrinkles and creases, each convincingly convey a parent’s hopes and anxieties. And Robb (who wore a green sleeve on her arm throughout filming, allowing the visual effects team to transform it into a stump in post-production) is just sweet and tough enough.  Best, though, is that Soul Surfer, amidst the action fare that inevitably attracts a generation of youth we parents and grandparents often criticize for having an abundant sense of self-entitlement, serves up some life lessons they can take to heart about what’s really important, and how to keep a perspective.