Staying Sharp empowers you to take control of your brain health as you age. Try it today! 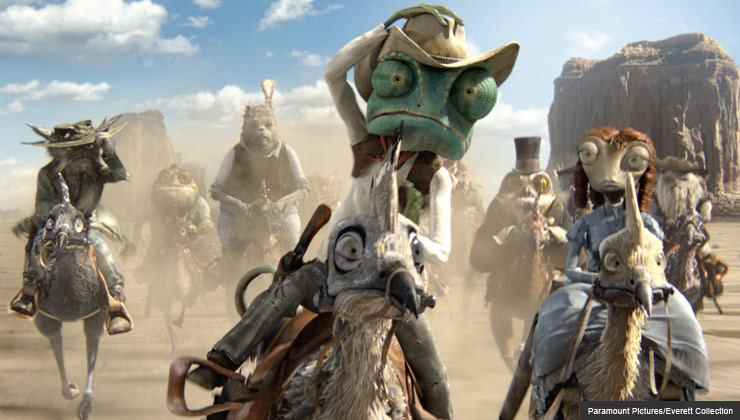 En español  |  Like the unnamed stranger who appears at the end of a dusty street in many a western, there’s a new kid in Animationville: George Lucas’s Industrial Light & Magic. Heretofore a provider of eye-popping visual effects for other people’s movies, ILM this time is the animation house for Rango, a feast for the eyes and a computer toon that, for once, doesn’t seem bent upon cribbing from the Pixar playbook.

You’ll look in vain to find a cuddly, cute character in Rango (a little mouse voiced by Abigail Breslin, comes closest, but she’s cute in a repulsive kind of way, like the mouse you spot scurrying out from under your refrigerator). A Western set in a frontier town called Dirt, Rango introduces us to any number of quirky, deformed and downright ugly denizens. We know we’re not in Toon Town any more almost from the start, when a domestic pet lizard named Rango (Johnny Depp) accidentally falls from a family car, tumbles along a desert highway and comes face-to-face with a wise old armadillo (Alfred Molina) — who has already been half-flattened by passing cars.

Like the hit films that come out of Dreamworks (Shrek, Madagascar), Rango has an edgy feel to it — but it arrives at that edge honestly, without resorting to winking double entendres or manic pop cultural references. The town that Rango stumbles into is a scary place, but scary because it’s unknown to him, and he overcomes his fear by pretending to be brave. The film’s most genuine humor arises from this angular, awkward lizard’s repeated efforts to convince these imposing townsfolk that he’s one tough hombre — and from how those lies keep leading him into deeper and deeper guacamole. Depp shows extraordinary care in his voice work. It helps that director Gore Verbinsky, helming his first animated film, had Depp record his dialogue in the presence of the other actors (for most cartoons, the voice talents record separately, and seldom even meet).

I suppose there is one significant pop culture string in Rango, and it’s nicely interwoven throughout the story: In many ways, Rango is an animated remake of — of all films — Chinatown. There are hints of the pedigree early on when Rango, sleeping in a supposedly dormant drainage pipe, is suddenly washed away in an unexpected, and unexplained, rush of water. Much the same thing happens to poor Jake (Jack Nicholson) in the 1974 Roman Polanski film noir. And just when you figure that was simply one of those narrative coincidences that necessarily occur during a lifetime of movie going, here comes the mayor of Dirt, wrinkled and decrepit, voiced by Ned Beatty in his very best wheezy John Huston voice, telling Rango, “Control the water … and you control everything.”

Now that’s a pop culture reference I can live with — it sure beats the TV commercial/sitcom/tabloid wisecracks we’ve come to expect from most cartoons as they desperately try to appeal to the adults who’ve been dragged along to the multiplex.

Wisely, writer John Logan lets the references speak for themselves, and he doesn’t belabor them. In the end, Rango succeeds as a charmingly awkward tale of lovable, ugly do-gooders and desperadoes, a delightful visit to a town that’s a lousy place to visit, and you sure wouldn’t want to live there.