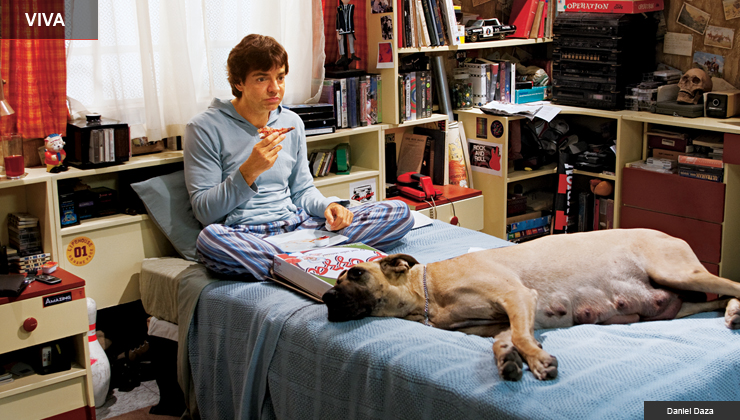 In It's Not You, It's Me, the jilted husband (Eugenio Derbez) gets conned into buying a Great Dane — an ultimate chick magnet.

En español | The romantic comedy No Eres Tú, Soy Yo (It's Not You, It's Me, in Spanish with English subtitles) was one of the highest-grossing Mexican films of all time. This April, Pantelion Films — a new Hollywood studio billing itself as the first dedicated to offering top-quality commercial releases for Hispanics — hopes the 2010 film also captures the hearts of U.S. Hispanics, who represent more than a quarter of all frequent moviegoers in this country.

"People want to laugh, but there's the challenge with Latino audiences because comedy is often regional," says Jim McNamara, chair of Pantelion. "So we're choosing films that aren't telling a specific local story, have stars with a broad appeal and serve U.S. Hispanics, a vast unsatisfied and underserved market."

The movie features Eugenio Derbez, one of the hottest stars in Mexico today. McNamara says it also doesn't hurt that 60 to 75 percent of the U.S. Hispanic moviegoing audience is from Mexico.

The film follows 30-year-old cardiovascular surgeon and part-time disc jockey Javier (Derbez), who marries María (Alejandra Barros) in Mexico City. The two plan to start a new life in Miami. María is the first to move, while Javier stays in Mexico to pack up their lives. But on his way to the airport, Javier receives a call from his wife telling him she's seeing another man and using that standard psychobabble refrain, "It's not you, it's me." With no job and no wife, Javier remains in Mexico City to soak in his misery — and here the comedy begins. Javier, the heart surgeon with the broken heart, confronts the slings and arrows often aimed at hopeless romantics.

The studio takes a more serious turn with its next release, Abel, director Diego Luna's first full-length feature film. In this comic melodrama, a wordless 9-year-old boy returns home — against medical advice — after two years in a psychiatric hospital. Once home, he tries to fill the void left by his truant father.