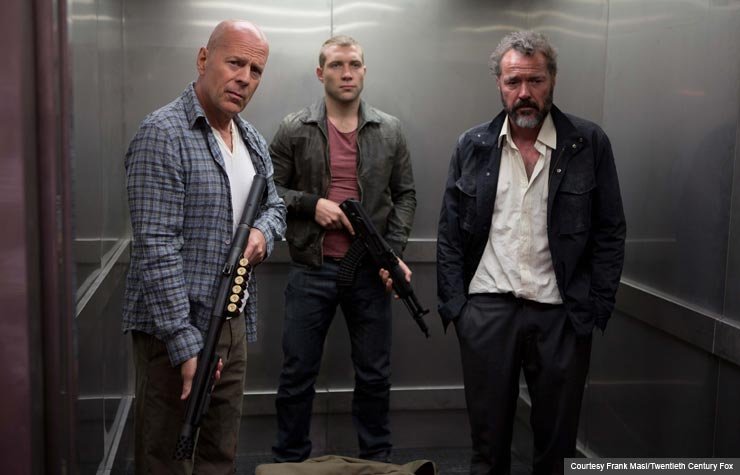 And so comes the third installment in what has become a trifecta attempt to recapture the action movie genre for 50-plus heroes.

First we got Arnold Schwarzenegger’s The Last Stand (a solid screen return, not-so-solid box office receipts); then we got Sylvester Stallone’s stylish shoot-em-up A Bullet to the Head (ditto). Bruce Willis’ A Good Day To Die Hard has more than a couple of unfair advantages over the first two, not the least of which is the star’s undeniable likeability. (Of the three stars, you must admit, Bruce is the one you’d most want to sit down with for beers.)

But the Die Hard franchise itself is also beloved, and the series’ basic premise — a wisecracking but fiercely principled man finds himself cornered into dealing a serious butt-kicking to some epically awful bad guys — has proved to be not only durable, but nigh indestructible. This is, after all, number five in a series that began when Ronald Reagan was president.

As New York cop John McClane, Willis has his trademark smirk intact, and it doesn’t take long for him to start running around in a bloody undershirt, in true Die Hard fashion. But this time John’s got a gun-toting partner: his son, who’s also named John McClane (Jai Courtney of TV’s Spartacus).

At the outset, John Sr. travels to Moscow to try and bail out John Jr., who’s in trouble with the law — or so it seems until Junior is revealed to be a CIA agent on a secret mission. John Sr. unwittingly messes up the assignment (that old impulsive streak strikes again) and soon father and son are on the run, killing bad guys while at the same time trying to figure out why the bad guys are trying to kill them.

Director John Moore, who specializes in action flicks (Flight of the Phoenix, Max Payne) is one of those guys who always forgets to bring a tripod; his camera shakes like a shaved Chihuahua. That’s supposed to make the action scenes more action-y, but if you’re like me, you find the effect more disorienting than anything else.

Explosions, on the other hand, Moore does well — and there are fireballs aplenty in A Good Day to Die Hard. Also, he stops the carnage long enough to develop the relationship between son and dad in a few nicely measured scenes.

I can’t think of another actor who has aged more pleasingly than Bruce Willis, now 57. Here he is, cue ball-scalped, reassuring crinkles on his face, arising a tad slower than before from each physical indignity. And while few mere mortals would actually spring to their feet after being hurled through the plate glass of an armored assault vehicle, John McClane has always been something of a superhero.

The movies are about myth, after all, and it’s a nice piece of lore that in Die Hard’s once-upon-a-time world, the hero can both age and stay invincible.