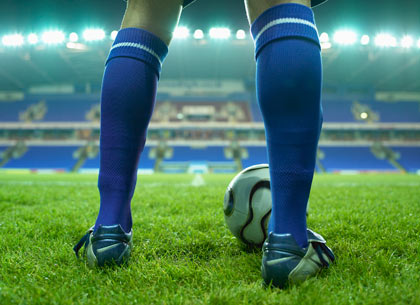 Plenty of drama is in store as millions of soccer fans around the globe anticipate the world’s biggest sporting event, set to kick off June 11 in Johannesburg with a match between Mexico and the host South Africans. For fanáticos of the “beautiful game,” and especially of the 32 participating teams, the once-every-four-years World Cup is a time when national pride and passion play themselves out on the soccer pitch.

As we count down to the World Cup, Ramos helps us answer a few key questions.

A. If Argentina’s Messi sustains his torrid scoring streak, the rest of the planet had better watch out. Yet Messi, widely regarded as the world’s best soccer player, is dogged by questions of chemistry—with his teammates and his coach, the legendary Maradona. Will Messi’s star shine or fizzle out in South Africa? Messi, touted as “the next Maradona,” is a superstar for his club team of Barcelona but has underperformed for his country. Argentina struggled to even qualify for the World Cup. Critics have questioned whether Maradona, who almost single-handedly carried Argentina to the championship in 1986, is the right man to lead the team. “Maradona as manager has not shown me anything to make me think they can go very far,” says Ramos, who believes Argentina plays more like a collection of stars than as a team.

A. Spain is notorious for flopping at major tournaments, but the country’s triumph at the 2008 European Championship might reverse that legacy. Led by such stars as strikers David Villa and Fernando Torres, Spain boasts top-class players at every position. The team is on a roll, losing only once in nearly four years (the sole defeat coming last year at the hands of the United States). La Furia Roja (the Red Fury) is a joy to watch, playing lively, aggressive soccer. Many believe it’s Spain's turn to win after decades of disappointment. “It was always said of Spain that they were a good team but were missing something in the end. Well, they’ve shown that they now have that ‘something,’” Ramos says.

A. Now on their third manager in as many years, El Tri (the tri-colored) appears to be getting into a groove under the guidance of Javier Aguirre. A key will be striking the right balance between younger players and veterans. Fans are expecting great things from up-and-coming stars Andrés Guardado and Jonathan Giovani dos Santos, as well as 37-year-old Cuauhtémoc Blanco, the team’s gutsy warhorse. Q. Can Paraguay recover from the shocking loss of its top scorer? A. When Salvador Cabañas was shot in the head in a nightclub last January (he survived), Paraguay turned to veteran star Roque Santa Cruz to carry the country’s hopes. The Paraguayans are usually underestimated, but they have gotten results when it matters, qualifying for the past three World Cup tournaments and reaching the second round twice.

Q. Can the United States get healthy in time?

A. The United States lucked out by drawing a relatively weak opening round group of opponents (England, Algeria, Slovenia). But the team, led by captain Carlos Bocanegra and Landon Donovan, is grappling with injuries to key starters such as defender Oguchi Onyewu and striker Charlie Davies.

Q. Will Chile score more goals than they give up?

A. The team’s all-out attack means the team scores—but also gives up—goals. The youthful squad lacks a true superstar, but is led by one of the top managers in the world, Marcelo “El Loco” Bielsa. One sure thing about Chile: its games are never boring. The first-round game against Spain promises plenty of action.

A. The Catrachos haven’t played in a World Cup since their tournament debut in 1982. With little to lose, the Hondurans could take the tournament by surprise. They will be looking for goals from veteran Carlos Pavon, especially after an injury sidelined sparkplug Carlos Costly. The Hondurans are drawn into the only first-round group with three Spanish-speaking teams, along with Spain and Chile.

Q. Can Uruguay live up to its history?

A. Uruguay hosted and won the first World Cup in 1930. This time around, the team squeaked into the tournament by winning a playoff against Costa Rica. Led by striker Diego Forlan (the son of Pablo Forlan, who represented the country at two Cups), Uruguay boasts an experienced lineup. Oscar Tabarez is in his second stint as the manager after taking Uruguay to the knockout stage in 1990. Watch out for the perennial soccer superpowers from around the globe—Brazil (along with Spain, the favorites to win it all), Italy, Germany, and England.

Looking ahead, Jorge Ramos, who will be broadcasting from South Africa, likes Spain’s chances to win, especially given the nagging injury troubles of Brazil’s playmaker, Kaká. He expects Italy and Germany to contend for the championship, and England and Mexico to disappoint their fans. Ramos is also high on his native Uruguay’s chances to exceed expectations. “Of course,” he adds, “I say that not as an Uruguayan, but as a soccer expert.”

If you’re crazy about soccer but can't make it to South Africa, you can tap into World Cup hysteria at local pubs, restaurants, and coffee houses that are televising games.

The Globe Pub in Chicago expects to be so crowded that it will have to turn people away, despite games starting as early as 6:30 a.m. Central Time. With two rooms and 20 television screens, the pub expects rabid fans of all nationalities to join in the fun. “That’s why we call it The Globe,” says pub owner Stuart Johnston. “We’ll get Spaniards, Germans, Italians, all singing songs and having a great time.”

Costello’s Travel Caffé in Portland also expects crowds to swarm the neighborhood spot, which boasts an international theme. Costello’s was packed for the last World Cup, and expects more of the same. “There would be a Brazil game, and all of a sudden the place would be filled with Brazilians,” says owner Chris Costello. “It’s a great atmosphere—there’s nothing quite like it.”

To find great places to watch soccer in your area, visit U.S. Soccer.