Community Discussion
The AARP National Spelling Bee took place on Saturday, June 19, in Cheyenne, Wyoming. Think you've got what it takes to win? Join our spelling bee group to engage other members about this exciting event. Discuss

Slumped in a metal chair on the stage, Scott Firebaugh didn’t look much like a winner. But only a minute before, his sole remaining opponent, Robert Moy, had cracked opened the door to victory with a miss on the word "myoinositol."

Firebaugh stood up, microphone in hand, and ever so methodically sounded out, "Keratomileusis. k-e-r-a-t-o-m-i-l-e-u-s-i-s. Keratomileusis."

The room went silent. Would the next sound be a bell, meaning a misspelling and the continuation of a nine-hour battle, or the one word that could mean a dream come true?

Amid a roar of shouts and applause, Firebaugh, 56, cracked a big smile — his first act as the 2010 AARP National Spelling Bee champion. The 15th annual competition had drawn 48 spellers, ages 52 to 86, from 18 states to Cheyenne, Wyo., and Firebaugh now stood alone.

"I thank God for this," says Firebaugh. "I feel humbled. Anyone could have won. A lot of this is the luck of the word draw, but luck favors those who are prepared."

The high school math and physics teacher from Knoxville, Tenn., says he started preparing for spelling success in third grade. "My older brother won an eighth-grade spelling bee. I decided if he could do it, so could I," Firebaugh recalls. After three years of studying, he entered his first event in sixth grade … and lost on the first word. Defeat turned to determination. Soon he racked up regional bee titles, finishing 16th in what is now the Scripps National Spelling Bee for middle-school students.

Then college, marriage, fatherhood, church and career intervened, but spelling never totally dropped off his radar. All four of his now-grown children competed in bees, his twin daughters making it to the nationals.

Five years ago, Firebaugh heard about the AARP national bee for adults. "I figured this was easy. I'd study a little, waltz in and win it,” he recalls. But those who forget history are doomed to repeat it. As in his sixth-grade contest, Firebaugh went out early. Realizing he'd miscalculated the degree of difficulty, he vowed to get serious and developed a master plan: Find unfamiliar words in the bee’s official Merriam-Webster's dictionary and compile them into study lists. A few hundred words became a few thousand ... and then a whopping 8,400.

Firebaugh reviews a few pages whenever and wherever there's time. An avid three-mile-a-day runner, he always sets out with a few word sheets in hand, glancing quickly at a word and then spelling it aloud. He repeats the routine on his way to and from school. In the summer when school is out, he sometimes drills up to eight hours a day, often with the help of his youngest daughter, Stacia, who pronounces each word for him to spell. "When we get going we can do 400 to 500 words an hour," he says matter-of-factly.

His mathematics background helps. "Like math, words have patterns that I enjoy figuring out," says Firebaugh, who also plays the trombone, reads and enjoys word games such as Boggle. 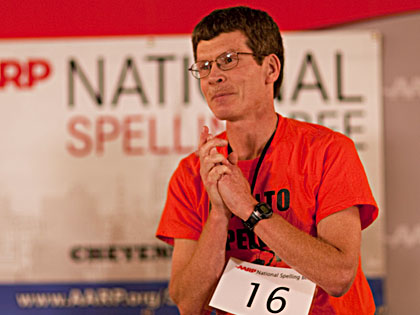 This year's final was a bit of déjà vu for Firebaugh, who in 2009 memorably battled 30 rounds, word by word, only to end up second after misspelling "etui." A rule change allowing past winners — such as 2009's Michael Petrina Jr., and 2005's David Riddle — to return amped up the caliber and tension of the event, which lasted a grueling nine and a half hours and 479 words before Firebaugh was crowned.

Was he nervous? Naw. "Missing my second word (the bee allows two misspellings) was a surprise, but from round 12 on it was smooth sailing. I knew every word I had to spell," including toughies like "onchocerciasis," "pycnogonid" and "xerophilous." Though he knows his stuff, there's no trace of ego to him. Firebaugh is quick to praise his fellow competitors, from veterans like Riddle to Moy, who was competing at his first nationals, and another newcomer, Tony Johnson, who scored 100 percent on the initial elimination round written test.

As fellow spellers come over to shake his hand or offer a pat on the back, it's easy to spot the camaraderie and friendship Firebaugh generates. He shares words and tips weekly through an e-mail group he calls "Spellers Nation Adult Version" (to join, e-mail sfirebaugh@comcast.net).

Clutching his trophy, the 2010 champion says that with maturity comes wisdom, and you learn that missing a word isn't the end of the world. But his face and voice give a tiny glimpse of the once-determined third-grader. "Spelling is a wonderful way to compete. It's definitely harder than when I was a kid, but I still love to win!"

Laura Daily is a Denver-based writer.