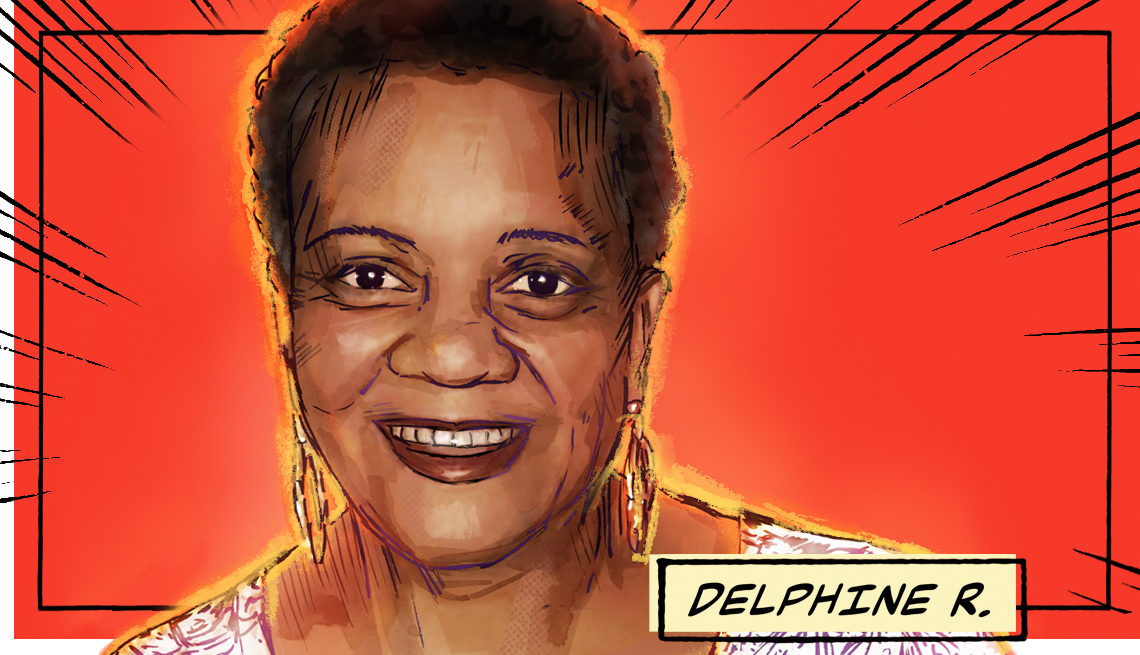 Name: Delphine R.
Username: Delreed351
Lives in: Michigan
Games: 5 Roll, Outspell, Mahjongg Dimensions
When not playing AARP games I am: Practicing ministry, leading memory workshops and caregiving with family
Quotable quote: “Stress relief is something you have to practice.”

Delphine R. may be a nearly 18-year member of AARP, but don’t label her as a retiree. “I don’t ever see the word ‘retired’ being a part of my vocabulary,” she says. “I was a stay-at-home mom until all my kids were grown. Then I went on to college and finished two degrees. I’m just getting started!” She’s also in ministry—work that, to her, will never end.

Motherhood and ministry aside, she started her own business at age 67. After looking for memory-strengthening workshops for seniors in her community and finding none, she started her own interactive workshop, A Season to Remember. She conducts the workshops among senior groups. Among the tools she offers her participants: AARP games, which she plays faithfully as a part of her own regimen for strengthening memory and focus. We talked with Delphine about her workshop, the hilarity of forced laughter and the game of her dreams.

If you are providing extra care for a family member or friend, look here for information and resources on topics like memory care, legal and financial issues, in-home and long-term care, and much more.

How do you use games to strengthen memory and focus?

I play three games on rotation, and they challenge various areas—word power, timing and strategy. Outspell deals with words, mahjongg is a matter of timing, and 5 Roll—there’s a strategy to it, deciding whether you’re going to scratch a roll, but it’s also relaxing. With 5 Roll, I don’t have to think too deeply, and I’m not being timed.

My sister was diagnosed with Alzheimer’s in 2017. And my mother, who’s 97, has a few challenges. I decided to research memory issues to see how I could help. I’d gone to a local caregivers workshop in my neighborhood that was sponsored by AARP, so I later called them to talk about memory issues, and they mentioned the games. I knew I needed to keep my focus, and these games were working my brain. When I started playing, I didn’t really have an expectation that better focus was going to be the outcome. But I saw what happened to me, and I thought, “Hmm, this has to be doing something for me, because I’m in a different place with my focus.” Seeing it for myself got me into researching other tools.

What are some of those other tools?

You’ve heard of people walking into a room and forgetting what they went for? Well, I announce to myself on the way to a room, “This is what you’re going in there for.” Repeating things out loud helps solidify information. Once, when I was highly stressed, I had to go check on my mom. I was on the road, taking the same route I took all the time, and my mind just went blank. I totally forgot where I was. At first, it was frightening. But I said, “I’m going to keep driving instead of pulling over. And I just believe that in a little while, this will become familiar to me again.” And that’s exactly what happened. So I let people know, if you have a memory lapse, don’t let your first response be fear, because then you can really go bonkers. Now, when I get in the car, I say to myself, “This is where you’re going, and this is the route you’re going to take,” whether it’s a familiar journey or not.

In my workshop, each participant goes home with a booklet with the basic elements of my research. For instance, in the “Focus Beyond Distractions” part, there’s a list of words in the booklet. The participants will look at the words for maybe two minutes, and then I’ll say, “OK, close your booklet,” and they’ll write down as many as they can remember. There’s also references to activities they can do online, and that’s where I bring in AARP games. Just like your body, your mind needs to be exercised. We also practice forced laughter—which is hilarious! Forced laughter has the same impact as laughing on your own, so I’ll have them repeat after me, like, “Ha, ha, ha, ha.” It’s funny! It really is.

That sounds like fantastic stress relief. What’s the relationship between stress and memory? And how do you relieve stress?

Stress has a direct impact on memory—when you’re stressed, you find yourself forgetting things more frequently, but if you practice being calm and even-keeled, you’re not as likely to be forgetful.

I deliberately drive the speed limit. It says to your mind and body that no matter who’s speeding around me, no matter what other nuts are on the road, I am going to drive at the assigned speed. It creates discipline. There are so many little things we can do to keep ourselves out of the stress zone. Yogi Honey Lavender tea is an excellent tea for chilling you out without knocking you out. And I am a Christian; that’s who I am. So just like I talk out loud to myself, I’ll have conversations with God the same way, which definitely provides an element of peace.

Destressing is something you have to practice. It doesn’t just happen overnight. Don’t let everything throw you in the moment. What good does that do? It doesn’t change the scenario. If you keep a peaceful mindset, perhaps you can see how to change things. With all that I’ve already been through, there’s nothing in this life that can happen that’s worth allowing it to totally wreck my world.

Stress can also play a part in depression, which I experienced during the years I was in a cycle of abuse with my ex-husband. Occasionally, depression will try me, but I’ve learned there are ways to get beyond that. My first recourse is prayer. Then I’ll go right to my computer and pull up AARP games.

Is there such a thing as too much gaming?

I took a class in addictive behavior in my last year of grad school, in 2016. I thought about the word “gaming” and the word “gambling,” and there are only two letters that are different. Both of them have the potential to create addictive behavior. Sometimes I have to tell myself, “OK, for three days, you are not going to go on that computer and play games.” Other times, I’ll set boundaries—maybe an hour, but if I feel myself getting caught up, I allow another 30 minutes so I can still get everything else done. Other times, when my stress level is at its highest, I don’t care how long I play! That’s not good. It’s a real balancing act.

I have to stay aware, because there are other things in life I have to accomplish. If I spend too much time with the games, I won’t have time for the things that are real. I’m not saying the games aren’t real; I’m saying I won’t have time to effectively accomplish the things I need to do. I want to be in a mindset of fulfillment, that I’ve fulfilled what my memory needed for that day and that I’ve accomplished what I needed to. But there are times when I’ve gone to sleep and dreamed about mahjongg, like, “OK, let’s match them, let’s match them.”

Well, do you win in your sleep?
I don’t know if I ever get that far!

Delphine’s pro tip: Get some outside help.

“Some people would look at this as cheating, but when I’m playing Outspell, I’ll bring up a website that unscrambles letters and creates potential words. I keep it right beside the game tab for ease in clicking back and forth. I use that strategy to get ideas about words that may be new to me, and also to see how well I can memorize the Outspell letters before I transfer them to the descrambler page. Once I do that, I figure out the best word that will get me the most points. It adds an extra memory element to the game and adds to my vocabulary when I discover a word I didn’t know existed!”