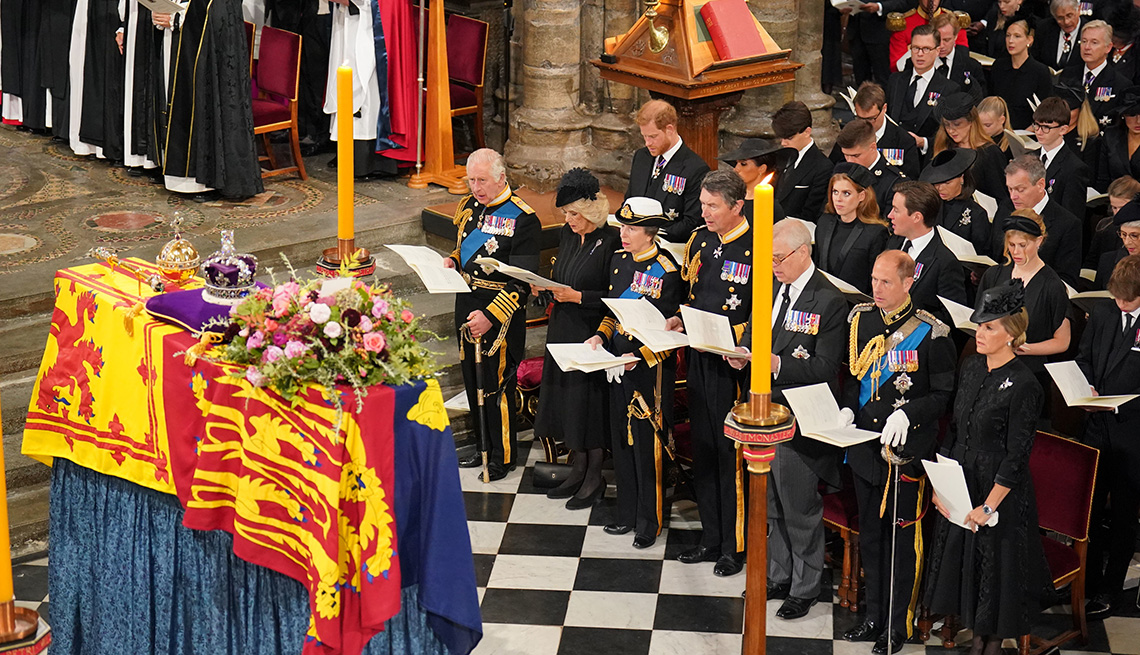 She often wore festive, bright colors, during her 70-year reign, to stand apart from the blend of male leaders in their somber suits. But it was also to help her achieve a primary goal. “I have to be seen,” she famously said, “to be believed.”

Queen Elizabeth II, who died at age 96 on Sept. 8, was not actually viewed during her majestic Sept. 19 funeral at Westminster Abbey — her closed coffin was draped in the Royal Standard flag and regalia — but never had all the world believed in her and in the history and great, sweeping tradition of Britain as it did in that moment.

As crowds ringed the London streets and stood at all the royal residences, hundreds of world leaders and dignitaries — including President Joe Biden, French president Emmanuel Macron and German president Frank-Walter Steinmeier — joined the royal family, war heroes and commoners inside the abbey to mourn the country’s longest-reigning monarch and much-loved figure, a woman who deftly seemed both untouchable and maternal to her subjects.

As Gaynor Madgwick, who survived a 1966 avalanche that buried her Welsh village, told The New York Times last week: “She looked over us, she protected us, she had sympathy, she had empathy. The queen has never let us down.”

Her majesty did not want a “long, boring” funeral, the former archbishop of York John Sentamu said in the days prior, and promised that the royal family, guests and all the watching world would be “lifted to glory” in a prayer book service and on the “angelic voices” of the choir of the Abbey plus the Chapels Royal.

She got her wish: The service lasted just over an hour and, along with the events preceding it and the processional that took her to Windsor Castle for burial in the tombs St. George’s Chapel, it offered a host of memorable moments that blended grief and gala, and high order with the touchingly human.

As 96 bells tolled, one for each year of the Queen’s life, 142 sailors — from Royal Navy vessels and stations across the U.K. — towed the queen’s coffin to the abbey on the State Gun Carriage of the Royal Navy, a tradition that began with Queen Victoria’s funeral in 1901. 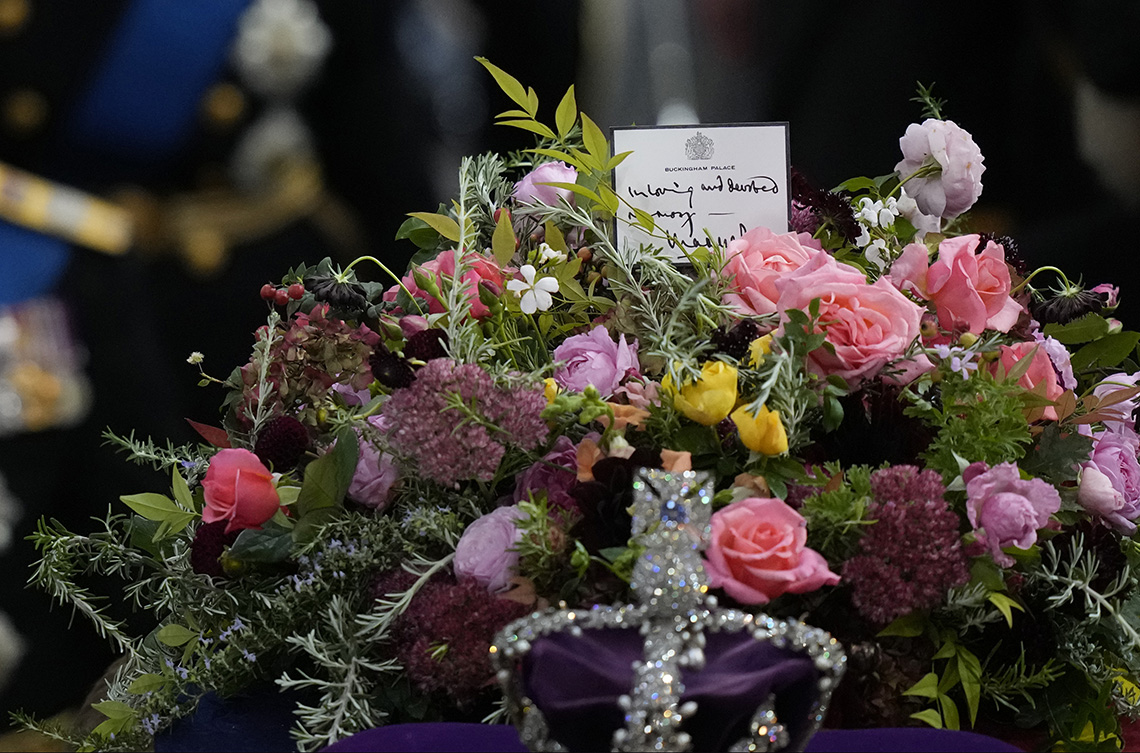 Atop the coffin were the supreme symbols of the monarchy: the Imperial State Crown, made for her father, King George VI, in 1937; the sovereign’s scepter and the sovereign’s orb; and a spray of flowers from the royal grounds with a handwritten note from King Charles III: “In loving and devoted memory. Charles R.,” signifying “Rex,” Latin for “King.”

A family in mourning

Though this was the grandest royal funeral in modern history, it was also a deeply personal affair, and the royals grieved as any other family. Seventy-three-year-old Charles may be a newly minted king, but today he was also a man who had lost his mother, and walking behind her cortege, he repeatedly raised a gloved hand to wipe away tears. William, the Prince of Wales, also dabbed his face with his handkerchief. 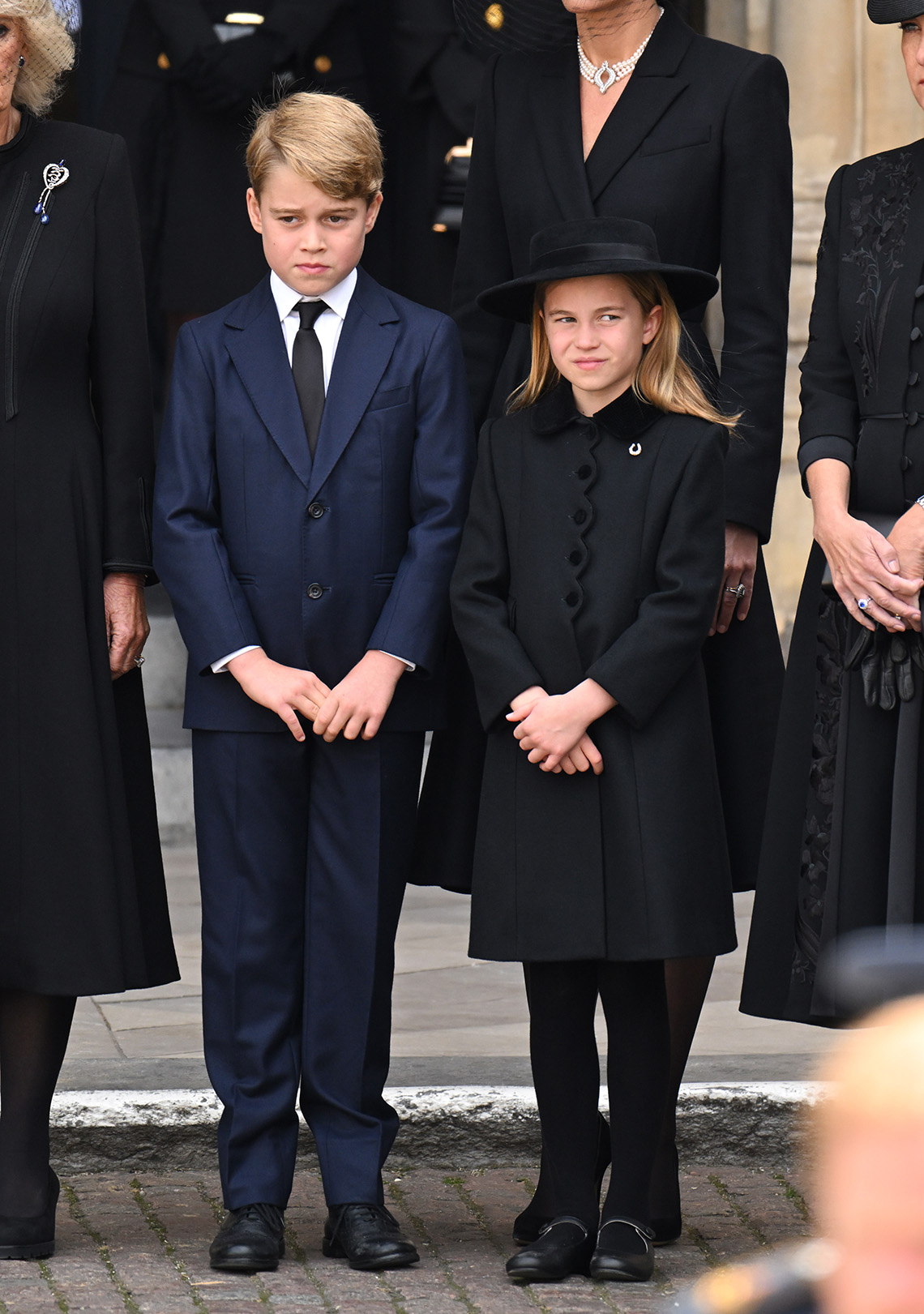 The great-grandchildren in surprise attendance

All eyes were on 9-year-old Prince George, the heir in waiting, and his sister, Charlotte, 7, as they paid their respects to their beloved Gan Gan. George seemed somber but sad, while Charlotte was later seen crying, with her mother, Catherine, the Princess of Wales, comforting her. Prince Louis, their 4-year-old younger brother, was not present. ​

Music, always a powerful and emotional part of royal pageantry, played a key role in the fanfare of today’s events, from choirs and the congregational singing of “Love Divine, All Loves Excelling” (also sung at the wedding of the Prince and Princess of Wales in 2011) to the State Trumpeters of the British Army’s Household Cavalry, who sounded “The Last Post” from the steps of the Lady Chapel.

Following a two-minute observation of silence across the U.K., the focus shifted momentarily from the queen to the progression and passage of rulership. The attendees, all sang, but instead of “God Save the Queen,” this time it was "God Save the King." An emotional Charles III kept silent, as is tradition, with Camilla, the Queen Consort, singing beside him, looking both aggrieved and humbled. 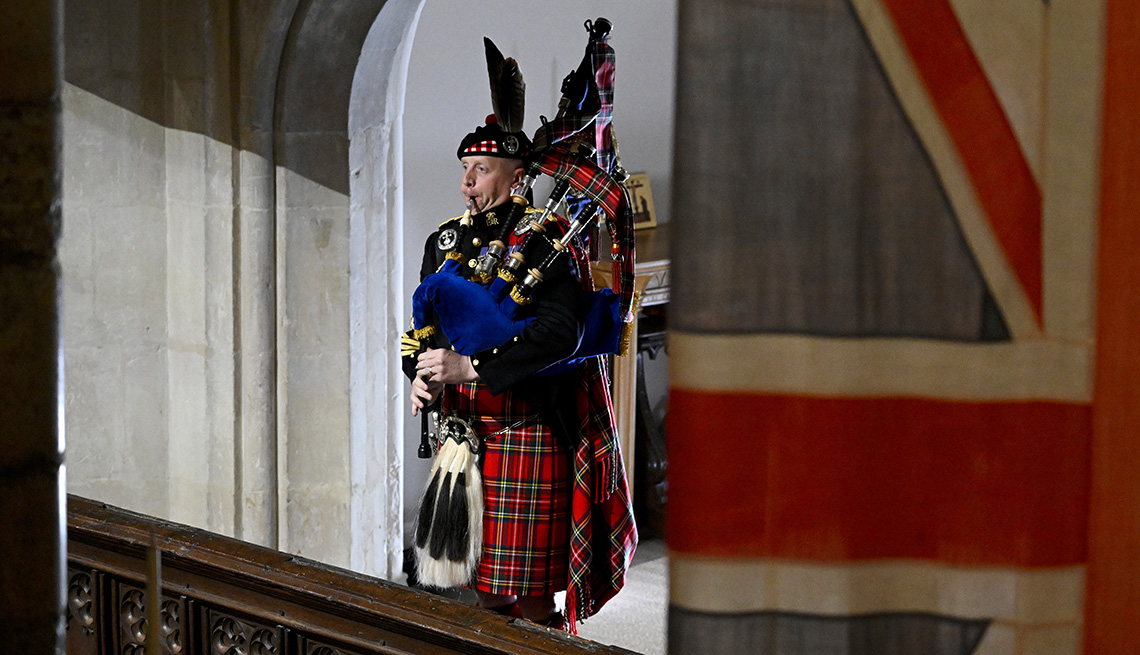 Operation London Bridge, the code name for the funeral plan, had been planned since the 1960s and incorporated numerous nods to the commonwealth and the U.K.’s four constituent countries, including Scotland. Scottish bagpipes and drums accompanied the queen’s coffin on its journey to the abbey, and the ceremony closed with an even more poignant moment: As the congregation stood, the queen’s piper, Paul Burns, of the Royal Regiment of Scotland, who had played beneath her window for 15 minutes each morning to awaken her, performed the traditional lament, “Sleep, Dearie, Sleep,” with the music gradually fading as if to lead her home.

As the military processional, led by the Canadian Mounties, snaked its way on the last leg of the queen’s journey from Balmoral to Windsor, and British flags hung every few feet on the Mall in London, television cameras frequently hovered on the Imperial Crown. The bejeweled headpiece — which includes the oldest gem in the royal collection: a sapphire said to have once been worn in a ring by the 11th-century king of England, St. Edward the Confessor — is a supreme symbol of British power, continuity and history. And awe-inspiring beauty.

That, above all, was on full display today, in remembrance of a woman who seemed not so much the queen of Great Britain only, but of all the world.

Alanna Nash is a contributing writer who covers celebrity and entertainment. She has written 10 books, including several on Elvis Presley and Dolly Parton. She received a Country Music Association Media Achievement Award and a Charlie Lamb Award for Excellence in Country Music Journalism. 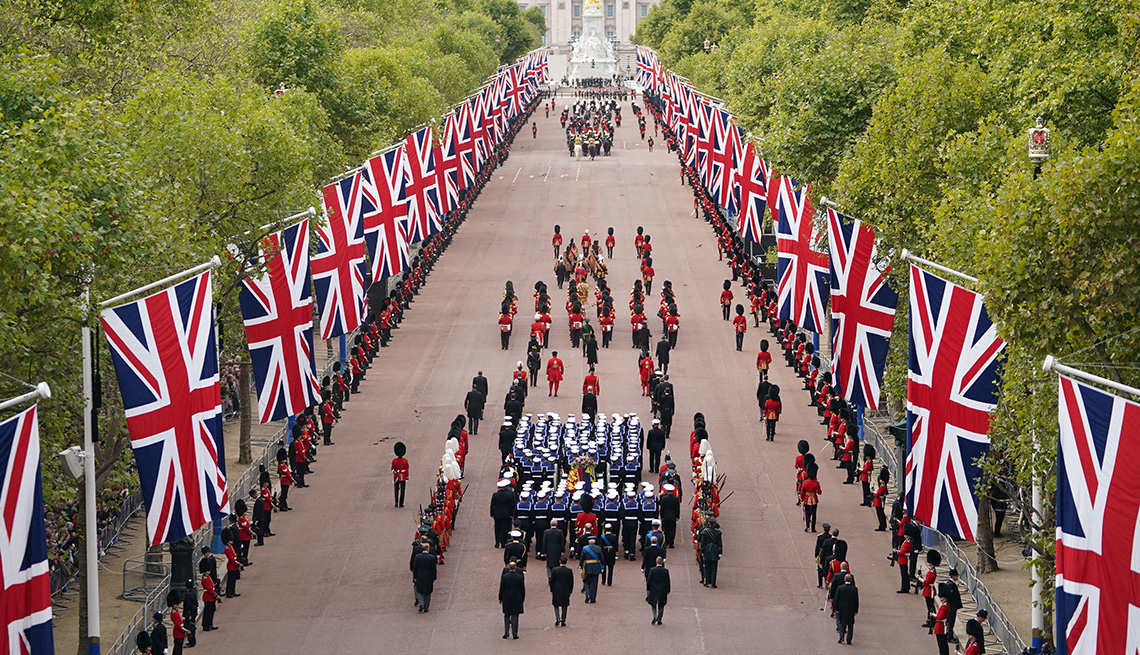 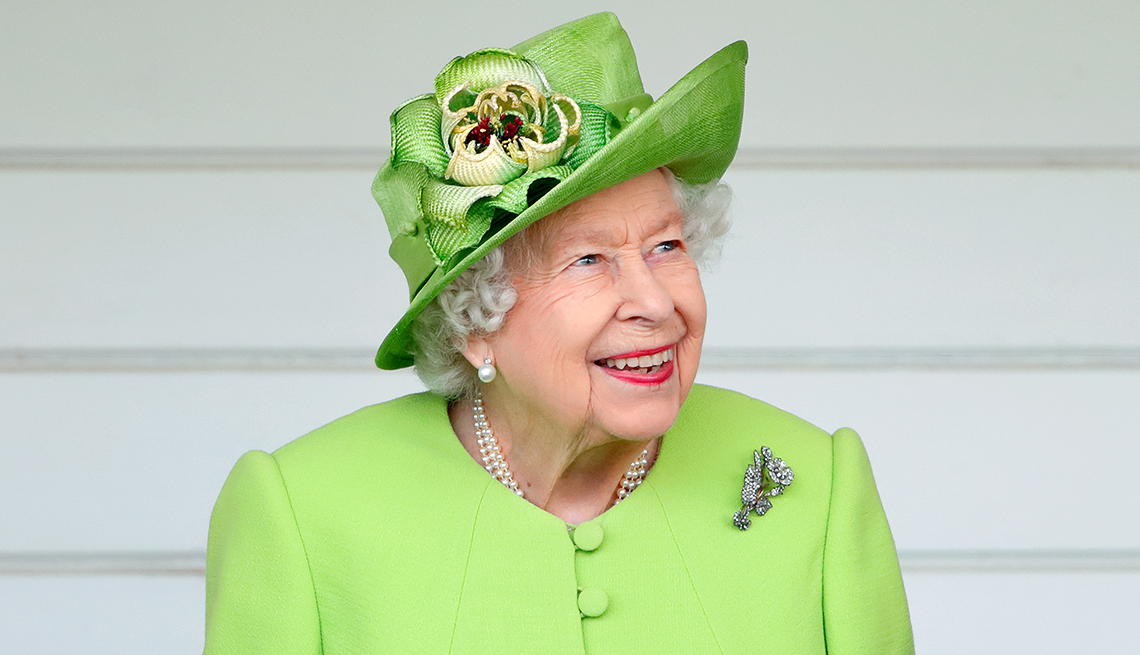 Stunning images capture the Queen in all facets of her life 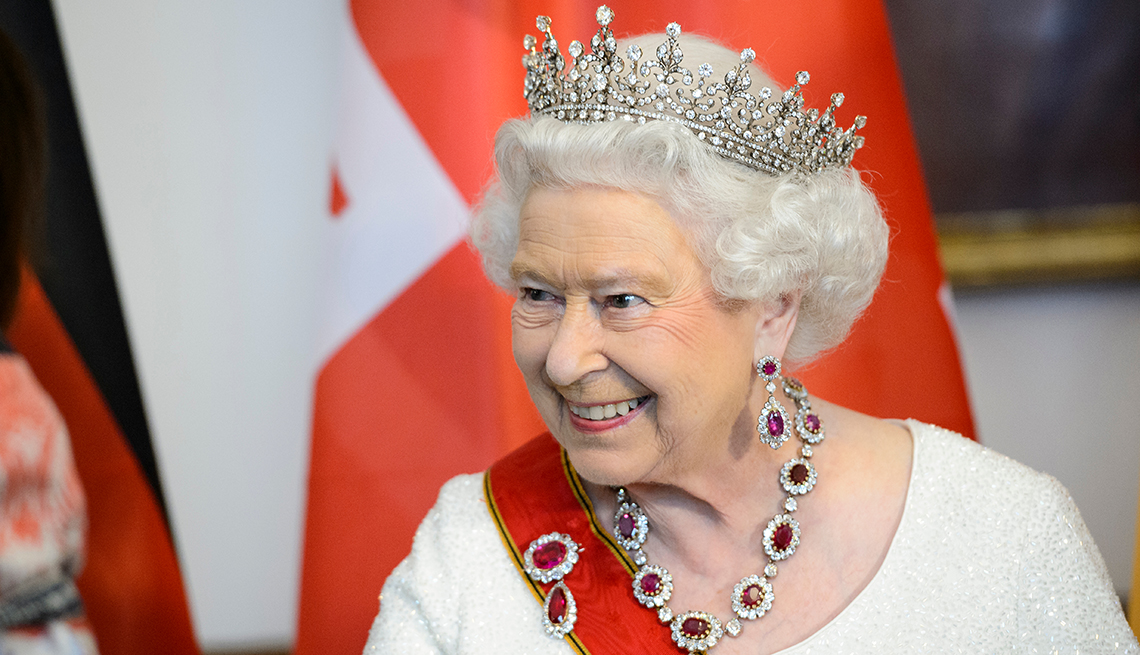