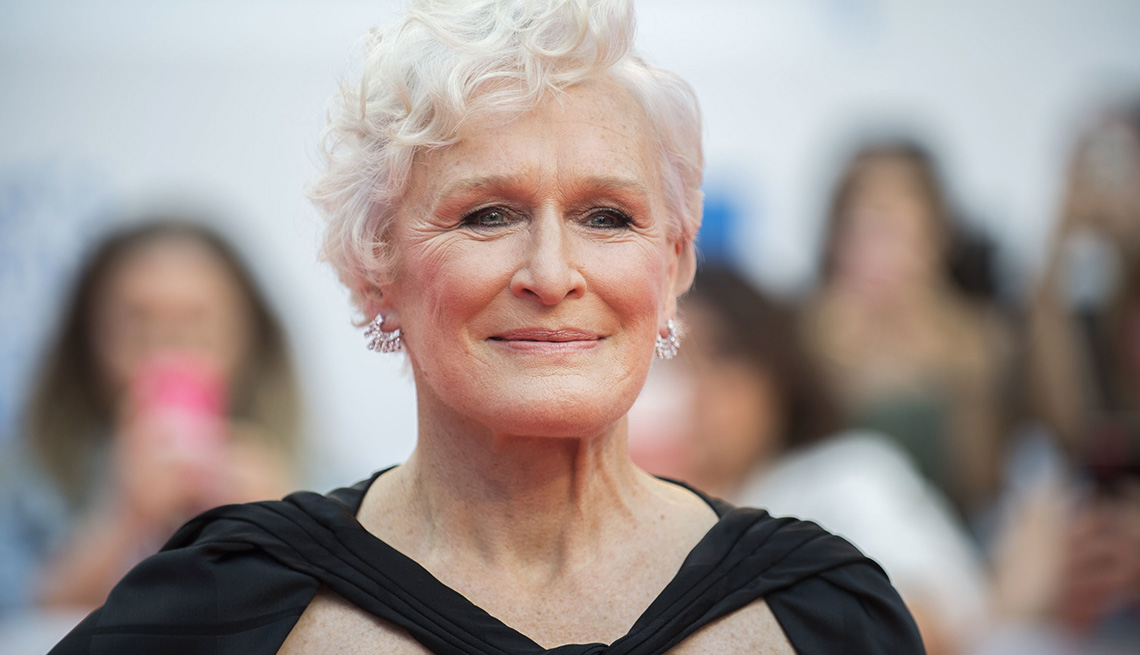 At 70 years old, Glenn Close is having her biggest year yet — and could an Oscar win be next?

At this week’s Toronto International Film Festival, Glenn Close, 70, attacked Hollywood for discriminating against grownup actors. "It's kind of ironic, because we're at the peak of our power. We really are," she said, adding that she sees the possibility of more doors opening with TV’s renaissance. “The advent of cable, and all the other places where people can express themselves, will hopefully be helpful for women, because there will be more places to find money for their projects."

Close has six Oscar nominations, more than any living actor without a win, but she’s won plenty of other awards: three Emmys, three Tonys and AARP’s 2012 Movies for Grownups Award, which she accepted by saying, "I'm up there [in age] and I feel like I'm 18 years old." But she’s never had more films than in 2017. In The Wife, she’s the spouse of a Nobel Prize-winning author (played by Jonathan Pryce, 70); in The Wilde Wedding, John Malkovich, 63, disrupts her wedding to Patrick Stewart, 77. She’s called it “a romantic comedy for my generation, which don’t come along very often. And yet, just because you get older doesn’t mean you lose any sense of romanticism or sensuality. I think people don’t realize that you keep your sexuality until you die. I think it’s good for kids to see it.”

She’s also in Downton Abbey creator Julian Fellowes’ Agatha Christie film Crooked House; the Netflix sci-fi flick What Happened to Monday; the Owen Wilson comedy Bastards; and The Simpsons, in which she’s Homer’s hippie mom. It looks like Sunset Boulevard, the age-conscious musical that won her a Tony, is about to be filmed, with her again in its lead. She's also got an Amazon pilot, Sea Oak, by George Saunders, 58, who's favored to win the prestigious Booker Prize in October. It's her first regular TV role since Damages, which earned her four Emmy noms and two wins in five years.

Close has triumphed over age discrimination from the start, having launched her career very late by Hollywood standards. She was 35 when she made her first film, The World According to Garp, which started her string of Oscar noms. Her career was delayed, as she tells it, by her unconventional upbringing.  When Close was 7, her father joined the restrictive spiritual movement, Moral Re-Armament, which was behind the youth singing group Up With People. “What actually saved me more than anything was my desire to be an actress," she has said. But singing for big audiences helped her learn performance, and her escape made her psychologically strong.

When she was up for 1987's Fatal Attraction, she was the last choice after Barbara Hershey, Michelle Pfeiffer, Kirstie Alley and many others. Despite three Oscar nominations by then, Close was thought too old and too earth-mother (from her role in Garp) to play Michael Douglas’s lover and stalker.  “We were doing a big favor for Glenn’s agent by letting her read,” Douglas said. “She’s a wonderful actress, but she always projected a Puritan vision. But the moment I saw her, I was like, Woh!” Indeed, Close proved 40-year-olds can be so sexy it’s scary, and her bunny-boiling scene is so iconic it was re-enacted on SNL last year.

A lifelong rebel, Close screamed at Fatal Attraction’s director Adrian Lyne for changing the end, and killing off her character. “I was furious!” she says in the 2017 book Leading Lady. “I said to Michael, ‘How would you feel if it were your character?’ He said, ‘Babe, I’m a whore.’” In her book, Close recalls seeking advice from Big Chill castmate William Hurt, 67, a fellow maverick who once quit the Oregon Shakespeare Festival to defy the director who made him do the Bard in a gorilla suit, and then won fame in Body Heat. Hurt praised Close for speaking up, but advised her to "buck up" and do the film the director's way. The $320 million hit earned her a fourth Oscar nom.

She’s doing just fine now, but admits that an Oscar win would be a nice change. As she told the Guardian newspaper, “I’ve always felt like I’m an outsider looking in and I guess that’s why something like an Oscar would mean a lot. It’s the most valued recognition you can get, certainly in film, and having been doing it for so long, it would mean a lot to me.”