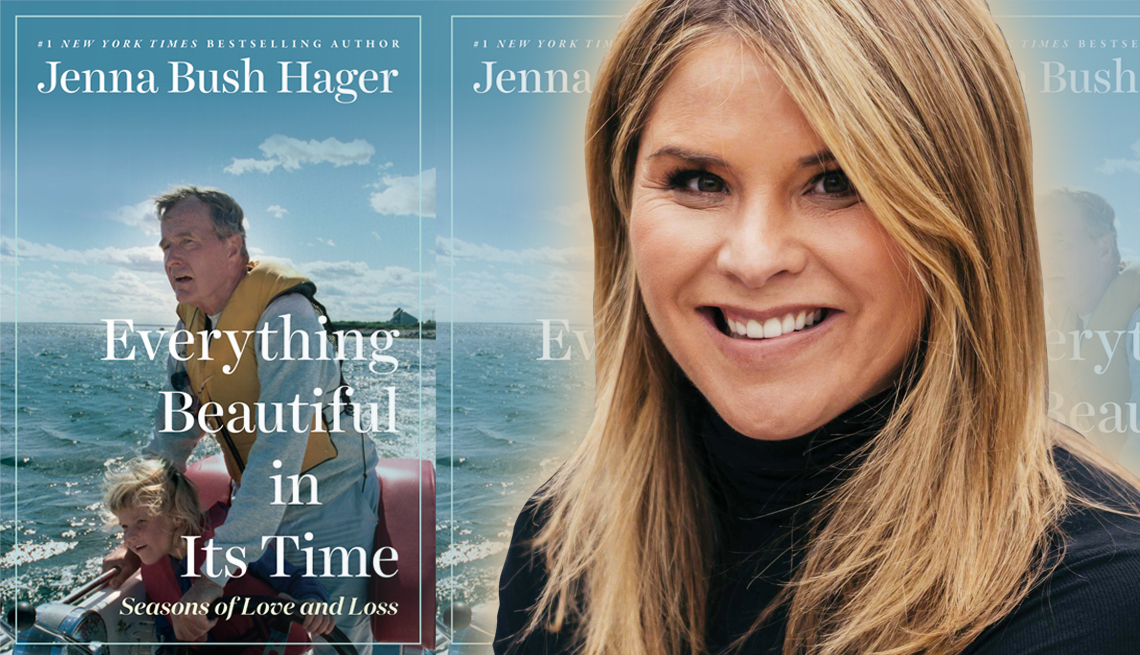 Jenna Bush Hager has come a long way from her days as a self-conscious young woman with a father, George W. Bush, in the White House. Now 38, she's a cohost with Hoda Kotb on NBC's Today, founder of the show's influential book club, and author of a tender new memoir, Everything Beautiful in Its Time: Seasons of Love and Loss.

The book of essays is a poignant homage to her and twin sister Barbara's four beloved grandparents: former president George H.W. and first lady Barbara Bush (known as Gampy and Ganny) and their mother Laura's parents, Harold and Jenna Welch (Pa and Grammee). Pa passed away in 1995; their other three grandparents died in the past few years. Hager offers treasured memories of time spent with each, and how they taught her about kindness, confidence and grace under pressure.

In the chapter below, she describes visiting her paternal grandparents in Maine with her baby daughter, Mila (who now has two younger siblings, Poppy and Henry), and some words of wisdom she received from Gampy.

'To Thine Own Self Be True’

One of the most precious videos I have is from the first trip baby Mila took to meet her great-grandparents in Maine. A video camera recorded the moment when she was first placed in my Gampy's arms. I've watched the scene many times.

As we sat for drinks on floral couches in the living room of the house I'd visited every year of my life, Gampy crooned to Mila, “When you walk through a cloud, keep your head held high!”

She gazed up at him, rapt.

Struck by the contrast between this man who had lived such a full life and this precious infant, a mere three months old, who couldn't yet speak and had her whole life ahead of her, I felt called to ask a question. Pointing at Mila, I said, “Gampy, when you see a baby just starting her life, like that one, what would you say are the most important things that you've learned over your life?”

He thought for a second. Then he looked at her with affection and said in a strong, quiet voice, “Be true to yourself. To thine own self be true.”

That line from Hamlet, while spoken by Polonius as part of a comic monologue, rings true to me as a reminder to cultivate self-acceptance. That is something I and many women I know have struggled with at various points — for me, it was a particular challenge in middle school.

When I was in seventh grade, like so many middle school girls, I didn't love seeing my body in a bathing suit. A large, irregularly shaped birthmark on my thigh made the prospect of swimwear even more daunting. When walking around pools, I tried to hold my hand in such a way as to cover it up. I must not have done a very good job, though, because after my then-boyfriend Eric and I went swimming with a group of friends, he broke up with me, citing the unsightly birthmark as his reason.

Right around that time when I felt the most terrible about myself, TV cameras arrived in my family's home. My dad was running for governor, so a local news reporter came over to interview us.

I would have been thrilled to see the cameras if I hadn't just experienced a breakup. With dreams of being a Broadway star filling my head, I incessantly sang “Castle on a Cloud,” always with a broom in hand. When I'd first heard about this TV appearance I imagined it might be my big break. Les Miz casting directors sitting at home would notice the chubby middle schooler and shout, “There's our Cosette!”

Now I just hoped to make it through the interview without humiliating myself. The task seemed simple enough. The segment was a straightforward profile of the politician and his family. By beaming at my dad and answering questions about our lives, we would help people see him as the lovable family man we knew him to be.

Sitting on the couch, we were doing a good job until, all of a sudden, we were interrupted by the ringing of a phone. It was Barbara's and my private line, which had been recently installed as a Christmas gift, to our great delight.

My father said, in front of everyone, “Oh, is that Eric calling?”

That was my dad being himself — disregarding the cameramen, sound guys, and local reporter in her trim suit, to joke with his daughter about her boyfriend. Now, at the height of my awkward stage, clear braces and all, I did not appreciate his attempt at levity.

I hadn't told him that Eric had dumped me that week, but he must have known as soon as he saw my face, for it instantly turned a deep red.

I hurried to get the phone, so discomfited that on the way I ran directly into a wall. (I've always been a klutz — less Most Likely to Succeed than Most Likely to Trip Crossing the Stage at Graduation.)

You'd think the news station editors would take pity on a young girl having a bad day, a girl who clearly longed to be flawless like teenage actors on TV, with their straight teeth, unblemished skin, and uncanny sense of how to get through a doorway. But no. My accident aired on the evening news. I suppose they thought it made us seem like a real family. See? Even politicians have mortified, uncoordinated adolescent daughters!

That was not the last time I would be embarrassed on television or in the press. I have misspoken. I have had bad hair. I have gone blank. All in front of millions of people. And I have heard about it. Everyone from op-ed writers to trolls on Twitter have parsed my words and my appearance. I've been on the covers of tabloids with my sister alongside headlines like “Oops! They Did It Again: The Bush Girls’ Latest Scrape.”

I'd like to say it's never bothered me, but the truth is that negative comments have sometimes hurt me more than they should. Why can we read twenty complimentary things without absorbing their kindness, whereas one snide attack can stop us cold?

I think it's because the comment we remember is always one that gets to the heart of the thing that we worry about most. As a tween, I was preoccupied with how I looked. When Eric broke up with me, it confirmed a fear of mine that my birthmark made me unattractive, unlovable. And I never have fully outgrown that insecurity. I still find myself, now in my late thirties, reaching for a sarong to cover up my birthmark when I go swimming with my girls.

And I have other, bigger fears now. One is that people will judge me either positively or negatively because of my family. I worry that people who take issue with my father's policies will believe he and I agree on everything politically or that I have to answer for his decisions. I worry, too, that people who love the Bush family will be extra nice to me or provide me with opportunities only because of my bloodline. 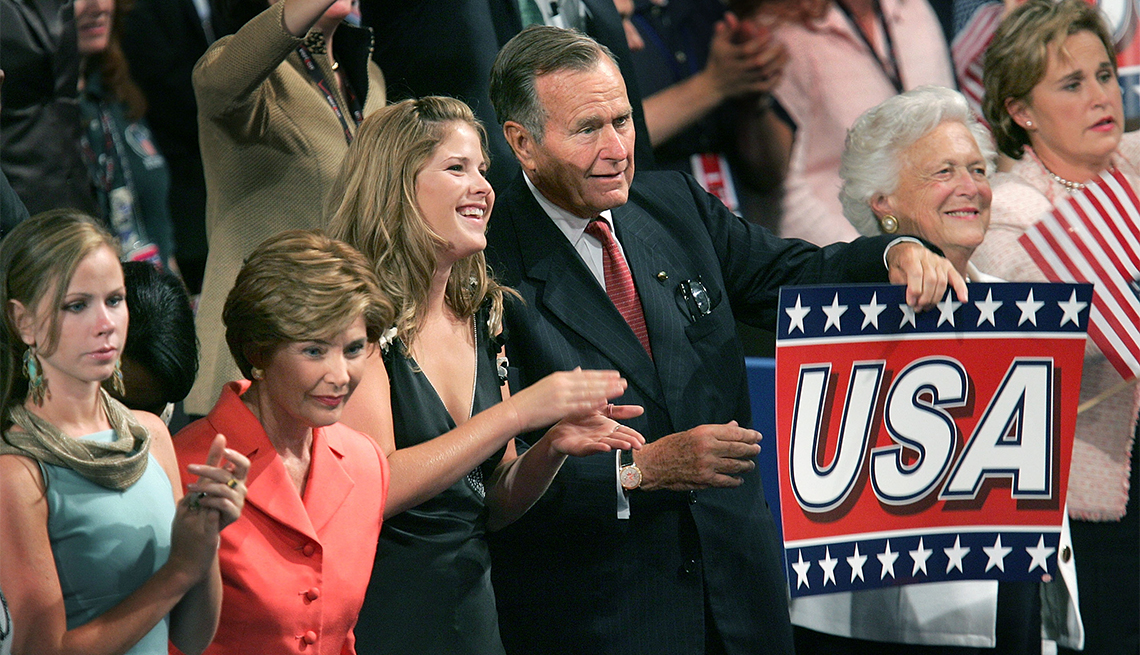 When I got my job at Today, I received thousands of notes of congratulations from friends and family and viewers. But for some reason one tweet that said I got the job only because of my dad was the one that I reflected on most that first week. It resonated with my most vulnerable part, corroborating an inner voice that said, That person is right. You're not good enough on your own. That comment hung over me like a dark cloud when I should have been enjoying my new job.

One day I was sitting side by side in the hair and makeup room at the Today show with Maria Shriver, the Emmy-winning journalist and former First Lady of California. Her friendship is valuable to me for many reasons, but especially because she offers a wise perspective on what it can mean to come from a political family.

As we had our makeup done, Maria asked me what was new. I began talking through my schedule. It was an insane blur of travel and work. Maria stopped me and said, “I'd like to tell you a story.”

She told me that she had just gone through security at the airport when a TSA agent had called out, “Hey! Aren't you a Kennedy?” (She is the niece of John F. Kennedy and Robert F. Kennedy.)

I knew she spoke the truth. Like Maria, I've worked myself to the bone to distinguish myself from my family, to prove that I'm worthy of my job and my life. My sister and I both do. I've come to realize we work so hard because we don't want to be accused of nepotism or to give any support to people who say success has been handed to us.

Maria forced me to ask myself: Why so much work? What truly fills me up? I love my job, but I also needed to stop and think about why I was working such long hours. Perhaps because it feels easier to wage a fight against real and imagined critics than to do what my grandfather said is the most important thing: be true to yourself, know who you are, and be at peace.

When people ask, “How can you bear being on TV and being constantly criticized for every little thing?” I say that my skin has become thickened by decades of public life. I've come to realize that in my heart I know what is true and what is not. I can't let strangers make me doubt myself or see me as someone who I'm not.

Whenever I hear people say something about me that I know to be false, I watch that video of my Gampy telling tiny baby Mila, “To thine own self be true.” I watch her eyes in the video, looking up at him with wonder. From those very first moments, she trusted him completely. And I believe she heard his message. Now, six years later, she is completely and unapologetically herself. I find myself studying that tape, letting the two of them teach me what it looks like to feel free.

Available at amazon.com, bookshop.org (where your purchase supports independent bookstores), Barnes & Noble (bn.com) and wherever else books are sold.