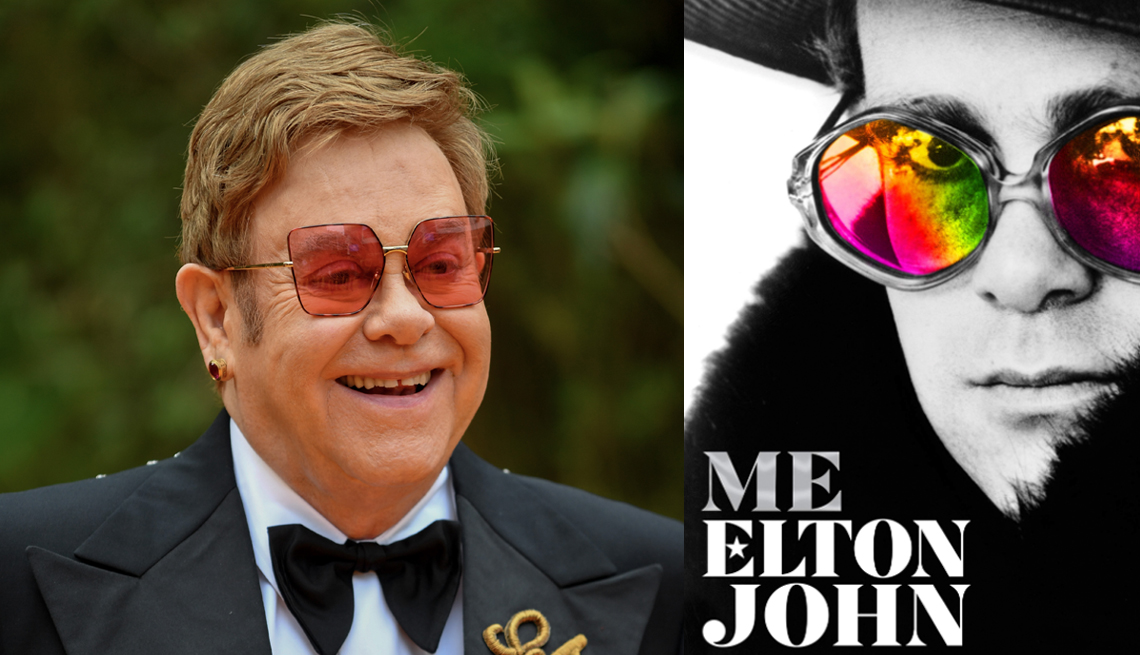 En español | The long-awaited, first-ever memoir from Elton John hits shelves this week, and it's a doozy. Me, as it's pointedly called, includes all the rock ‘n’ roll biography staples you might expect — the working-class childhood with dreadful parents and the sudden, disorienting rise to fame; the roster of celebrity pals and hurtful tabloid mistreatment; the death-defying drug use and eventual, grateful sobriety. But it's more colorfully told than most. Because it's Elton John.

Beyond the glitz, though, Me is really a kind of coming-of-age story about John's bumpy, seven-decade effort to find contentment. Now, at age 72, after a bout with prostate cancer and becoming a parent to two beloved boys with his husband, David Furnish, he seems to have done so.

Some interesting bits from the bigger-than-life star's new book:

His parents were a mess. His mom “definitely had some deeply weird ideas about parenting,” he writes, even “in an era when you kept your kids in line by clobbering them.” His dad was prone to irrational rage. But his grandma — “lovely nan” — Ivy Sewell, was his rock. It was on her piano that he first discovered his remarkable musical talent. ("If I heard something once, I could go to the piano and, more or less, play it perfectly,” he notes.) In her later years, Sewell moved in with John and stayed with him until she died in 1995.

The guy is fast. “Sometimes a song only takes as long to write as it does to listen to,” he reports. “'Sad Songs (Say So Much)’ was like that — I sat down, read the lyric and played it, pretty much the same as you hear on the record.” During breakfast one morning, when he was 24 years old, he wrote three complete songs: “Mona Lisas and Mad Hatters,” “Amy” and “Rocket Man."

He bought a lot — both while on drugs and when sober — including, while high, a trolley car from Australia ("not a model tram. An actual tram"), that would later need to be delivered to his home by two helicopters. He's collected in bulk pricey items like Tiffany table lamps, antiques and fine art, as well as gaudy kitsch. At one point he began storing the overflow on his squash court.

When dating his now-husband David Furnish, he found it impossible to be discreet. “If you're trying not to draw attention to a relationship, it's perhaps not the best idea to regularly send your partner two dozen long stemmed roses at work,” he quips. “The Cartier watch was probably a mistake as well.”

His recovery and sobriety

He got sober decades ago, but still dreams about cocaine “almost every week, and it's been 28 years since I last did a line.” It doesn't tempt him, though: “Quite the opposite … it's a drug that makes people act like arseholes.” He's now Eminem's AA sponsor: “Helping people to get sober is a wonderful thing,” he writes.

The appeal of Princess Diana

He adored her, describing her as “fabulous company, the best dinner party guest, incredibly indiscreet, a real gossip.” Everyone else loved her too: At a dinner party John once threw at his home for Hollywood types, with Princess Di as a special guest, Sylvester Stallone and Richard Gere nearly got in a fistfight over her. According to John, when Gere and Diana sat down together in front of the fire after dinner, Stallone “stormed off home."

While John still wants to write musicals, make albums and continue his longtime support of the AIDS Foundation, he also wants to do regular dad things, like taking the kids to school and out for pizza — “things I would once never have thought of doing.” But “most of all, I want to spend time being … well, normal, or as normal as I can hope to be."