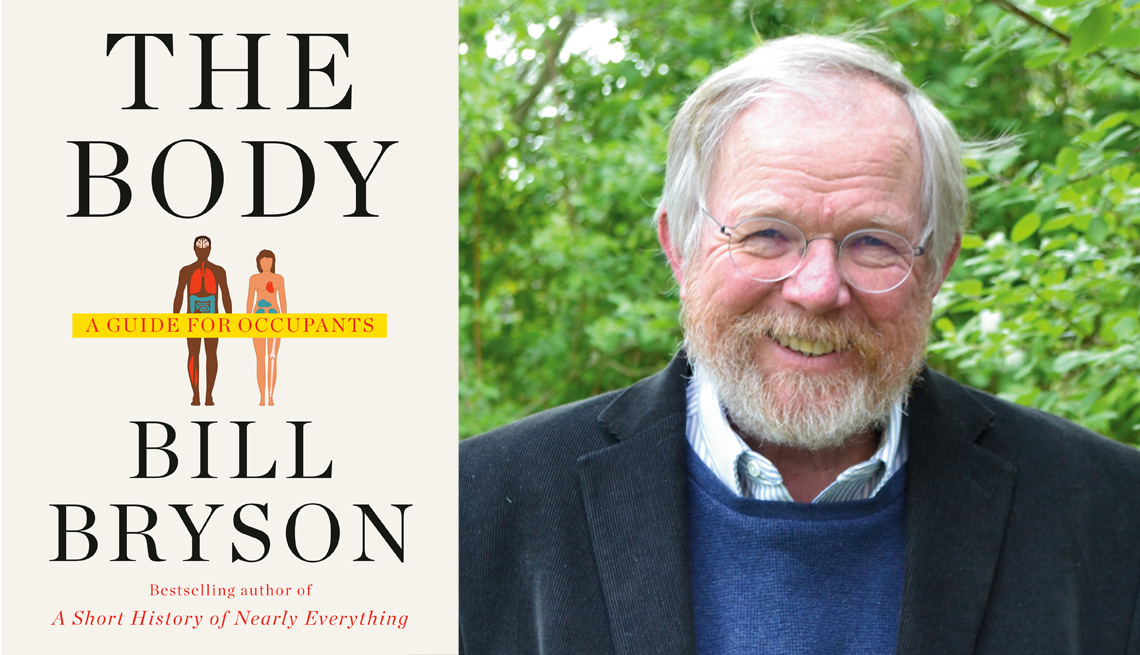 Bill Bryson is known for his lively explorations of England, in Notes From a Small Island (1995), and the Appalachian Trail, in his 1998 autobiographical book A Walk in the Woods. But he's also a fan of science: In 2005's A Short History of Everything, Bryson writes with wonder about, well, everything, from the vastness of the cosmos to the tininess of a cell.

Now, with his latest book, The Body: A Guide for Occupants, the hugely best-selling author guides us through our anatomy — diving into “the extraordinary contraption that is us.” Bryson, 67, explains the mechanics of how it works, and sometimes doesn't work, from head to toe, describing it all with a sense of awe “that we are just a collection of inert components, the same stuff you would find in a pile of dirt.… That is the miracle of life.” Maybe less humorous than some of his other works, it's still an entertaining, fact-filled internal journey.

An excerpt from Chapter 1 of The Body:

How to Build a Human

Long ago, when I was a junior high school student in America, I remember being taught by a biology teacher that all the chemicals that make up a human body could be bought in a hardware store for $5 or something like that. I don't recall the actual sum. It may have been $2.97 or $13.50, but it was certainly very little even in 1960s money, and I remember being astounded at the thought that you could make a slouched and pimply thing such as me for practically nothing.

It was such a spectacularly humbling revelation that it has stayed with me all these years. The question is: was it true? Are we really worth so little?

Many authorities (for which possibly read “science undergraduates who don't have a date on a Friday") have tried at various times, mostly for purposes of amusement, to compute how much it would cost in materials to build a human. Perhaps the most respectable and comprehensive attempt of recent years was done by Britain's Royal Society of Chemistry when, as part of the 2013 Cambridge Science Festival, it calculated how much it would cost to assemble all the elements necessary to build the actor Benedict Cumberbatch. (Cumberbatch was the guest director of the festival that year and was, conveniently, a typically sized human.)

Altogether, according to RSC calculations, 59 elements are needed to construct a human being. Six of these — carbon, oxygen, hydrogen, nitrogen, calcium and phosphorous — account for 99.1 percent of what makes us, but much of the rest is a bit unexpected. Who would have thought that we would be incomplete without some molybdenum inside us, or vanadium, manganese, tin, and copper? Our requirements for some of these, it must be said, are surpassingly modest and are measured in parts per million or even parts per billion. We need, for instance, just 20 atoms of cobalt and 30 of chromium for every 999,999,999.5 atoms of everything else.

The biggest component in any human, filling 61 percent of available space, is oxygen. It may seem a touch counterintuitive that we are almost two-thirds composed of an odorless gas. The reason we are not light and bouncy like a balloon is that the oxygen is mostly bound up with hydrogen (which accounts for another ten percent of you), to make water — and water, as you will know if you have ever tried to move a paddling pool or just walked around in really wet clothes, is surprisingly heavy. It is a little ironic that two of the lightest things in nature, oxygen and hydrogen, when combined form one of the heaviest, but that's nature for you. Oxygen and hydrogen are also two of the cheaper elements within you. All your oxygen will set you back just $10.87 and your hydrogen a little over $19 (assuming you are about the size of Benedict Cumberbatch). Your nitrogen (2.6 percent of you) is better value still at just 33 cents for a body's worth. But after that it gets pretty expensive.

You need about 30 pounds of carbon and that will cost you $54,000, according to the Royal Society of Chemistry. (They were using only the most purified forms of everything. The RSC would not make a human with cheap stuff.) Calcium, phosphorous and potassium, though needed in much smaller amounts, would between them set you back a further $57,000. Most of the rest is even more expensive per unit of volume, but fortunately only needed in microscopic amounts. Thorium costs almost $2,500 per gramme, but constitutes just 0.0000001 percent of you, so you can buy a body's worth for 26 cents. All the tin you require can be yours for 5 cents, while zirconium and niobium will cost you just 2 cents apiece. The 0.000000007 of you that is samarium isn't apparently worth charging for at all. It's logged in the RSC accounts as costing $0.

"No matter what you pay, or how carefully you assemble the materials, you are not going to create a human being."

Of the 59 elements found within us, 24 are traditionally known as “essential elements,” because we really cannot do without them. The rest are something of a mixed bag. Some are clearly beneficial, some may be beneficial but we are not sure in what ways yet, others are neither harmful nor beneficial but are just along for the ride as it were, and a few are just bad news altogether. Cadmium, for instance, is the twenty-third most common element in the body, constituting 0.1 percent of your bulk, but it is seriously toxic. We have it in us not because our body craves it, but because it gets into plants from the soil and then into us when we eat the plants. If you are from North America, you probably ingest about 80 micrograms of cadmium a day, and no part of it does you any good at all.

A surprising amount of what goes on at this elemental level is still being worked out. Pluck almost any cell from your body and it will have a million or more selenium atoms in it, yet until recently nobody had any idea what they were there for. We now know that selenium makes two vital enzymes, deficiency in which has been linked to hypertension, arthritis, anaemia, some cancers, and even, possibly, reduced sperm counts. So, clearly it is a good idea to get some selenium inside you (it is found particularly in nuts, wholemeal bread, and fish), but at the same time if you take in too much you can irremediably poison your liver. As with so much in life, getting the balances right is a delicate business.

Altogether, according to the RSC, the full cost of building a new human being, using the obliging Benedict Cumberbatch as a template, would be a very precise $117,876.39. Labour and VAT would, of course, boost costs further. You would probably be lucky to get a take-home Benedict Cumberbatch for much under $245,000 — not a massive fortune, all things considered, but clearly not the meagre few dollars that my junior high school teacher suggested. That said, in 2012 Nova, the long-running science programme on PBS in America, did an exactly equivalent analysis for an episode called “Hunting the Elements,” and came up with a figure of $168 for the value of the fundamental components within the human body, illustrating a point that will become inescapable as this book goes on, namely that where the human body is concerned the details are often surprisingly uncertain.

But of course it hardly really matters. No matter what you pay, or how carefully you assemble the materials, you are not going to create a human being. You could call together all the brainiest people who are alive now or have ever lived and endow them with the complete sum of human knowledge, and they could not between them make a single living cell, never mind a replicant Benedict Cumberbatch.

That is unquestionably the most astounding thing about us — that we are just a collection of inert components, the same stuff you would find in a pile of dirt. I've said it before in another book, but I believe it's worth repeating: the only thing special about the elements that make you is that they make you. That is the miracle of life.

From The Body: A Guide for Occupants by Bill Bryson. Copyright (c) 2019 by Bill Bryson. Published by Doubleday, an imprint of The Knopf Doubleday Group, a division of Penguin Random House LLC