Good news if you’re one of the countless readers who tore through The Nightingale, Kristin Hannah’s 2015 blockbuster novel and breakout hit: She has finally come out with her next book, The Great Alone. The two novels are both absorbing but very different. The Nightingale, focused on two French sisters during the Nazi invasion of France, is a romantic, action-packed epic (a movie version is in the works, naturally).

The Great Alone, set in the years after the Vietnam War, is a coming-of-age story about a girl, Leni Allbright, who moves with her parents, Ernt and Cora, to a log cabin in the wilds of Alaska (really wild, as in no running water, deadly cold, lots of bears). It's a quieter book, though it still offers a Kristin Hannah-style mix of tragedy and romance.

Ernt is a veteran who's been a tormented wreck since coming home from Vietnam. He hopes the move will give him a fresh start, but as the weeks pass he becomes an increasingly paranoid powder keg determined to cut himself and his family off from the rest of the world — not wise in a land where survival can depend on the support of your neighbors. He reserves special bitterness toward the wealthy Walker family, whose kind patriarch Tom wants to modernize the desolate little town enough to be able to welcome a few tourists.

Leni, a thoughtful, lovely 13-year-old, grows frustrated (as does the reader, to be honest) by her mother's terrified-but-loyal attachment to Ernt, an abusive nightmare of a husband and father who's none too pleased to discover that Leni has befriended, of all people, Tom’s son Matthew Walker. The teenagers' star-crossed romance leads to trouble as they grow older and Ernt more threatening. 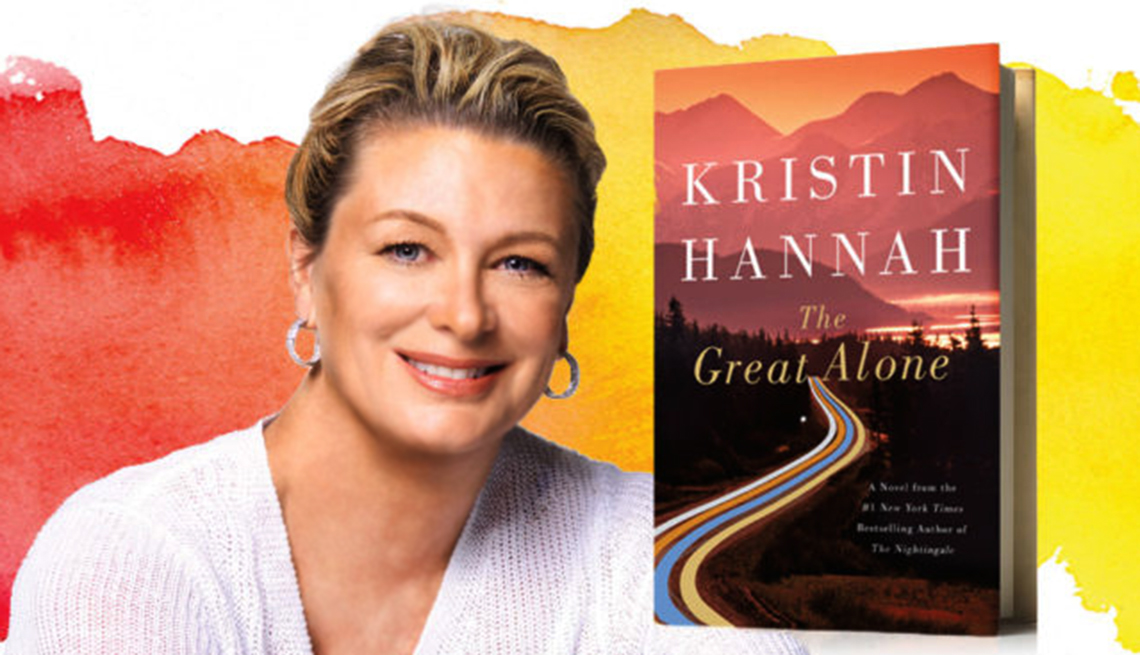 "The Great Alone" is author Kristin Hannah's latest book. She brings her mix of tragedy and romance to the story.

The reader roots for Leni and Matthew to get the heck out of Dodge, while hoping poor Cora comes to her senses about Ernt — but the book's most enticing character may be Alaska itself. Hannah brings the “terrible and beautiful” landscape alive; it’s a world where darkness lasts 16 hours in winter, you either stock up on food in summer or starve when the snow falls, and people disappear through thin ice in the blink of an eye. If it doesn’t kill you or drive you nuts, she suggests, it makes you strong as steel.

Hannah knows her subject. She’s described being a child in 1968 when her dad loaded the family into a VW bus in Southern California and said, “We’re going to look for the prettiest place we can find.” Ten years later they ended up in Alaska. In an AARP video about The Great Alone, she says, “I think Alaska either gets inside of you and you can never leave, or you can’t stay.”

To learn more about the book and talk to the author, stop by for an AARP Facebook Live chat with Kristin Hannah from noon to 1 on Feb. 14. It's a follow-up to AARP's big giveaway last month, when 2,500 Girlfriend readers received copies of The Great Alone.