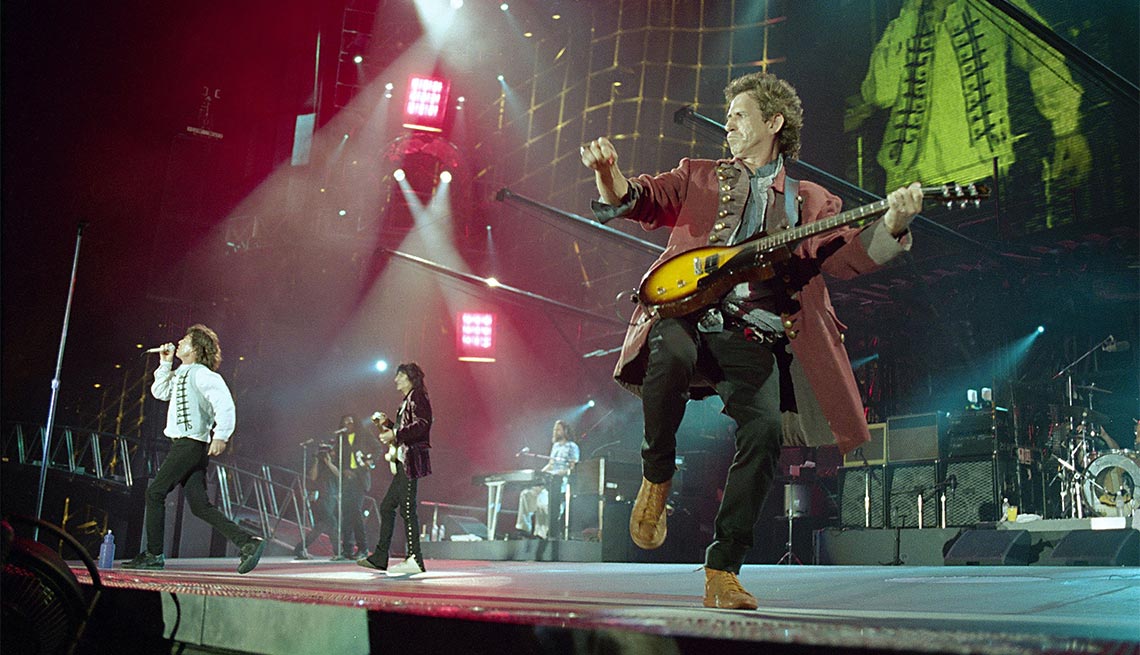 The Rolling Stones performing at RFK Stadium in 1994

WHEN IT HAPPENS, it happens fast. I was sitting on the stoop of my West Village apartment, waiting without knowing it. Then, just like that, I was carried away by the Rolling Stones. It was akin to my childhood dream of running off with the circus. The midway. The strongman. The Ferris wheel revolving against the flat Kansas sky. In 1994, I was 26 years old, and the Stones were crossing America. I'd been assigned to report on the tour for Rolling Stone magazine. I'd been bored, but I was not bored anymore.

In June, the magazine's managing editor called and asked me what I would be doing that summer.

"No special plans. Why?"

"Jann [Wenner, Rolling Stone's editor-publisher] needs you to fly to Toronto to watch the Rolling Stones rehearse for their tour."

My plane left LaGuardia at sunset. I looked calm on the outside, but my innards roared like a car in neutral with the gas pedal pressed to the floor. I took a taxi to Toronto's Harbour Castle hotel — where, in 1977, Keith Richards had been busted by the Mounties and charged with heroin trafficking. I got a room on the same floor as the entourage and was unpacking when Keith's manager, Jane Rose, knocked. "They just started rehearsing," she told me. "Let's go check it out."

The car parked in front of an elementary school, and we went in. No place is spookier than an elementary school at night. Then I heard it. "Brown Sugar"! That unmistakable riff. Jane led me along corridors and down stairs. I pushed open a swinging door and stood on the threshold, staring. The drums and the guitars. The microphones and soundboard. The Stones, their faces as grotesque as gargoyles. Familiar yet strange. Giant heads on tiny bodies.

Jane left at midnight. For the next several hours, it was just me, an engineer and the band. I sat on a bench and watched them put together a show. Hour after hour, they jammed for an audience of one. Between numbers, they stood around, tossing out song suggestions and talking them over. Once everyone had agreed on a number, the engineer flipped through a stack of CDs, then cued up the original cut. Keith fingered his guitar as it played, considering. Ron Wood, who would have to replicate the work of Brian Jones or the later Stones guitarist Mick Taylor, identified chords and jotted them down on a pad. Mick Jagger bounced. In fact, he never stopped moving.

During breaks, the Stones talked about the World Cup, the O. J. Simpson case or the oddness of returning to Toronto. "If I held a grudge against every town where I've ever been busted," Keith told me, "there'd be nowhere left to go." 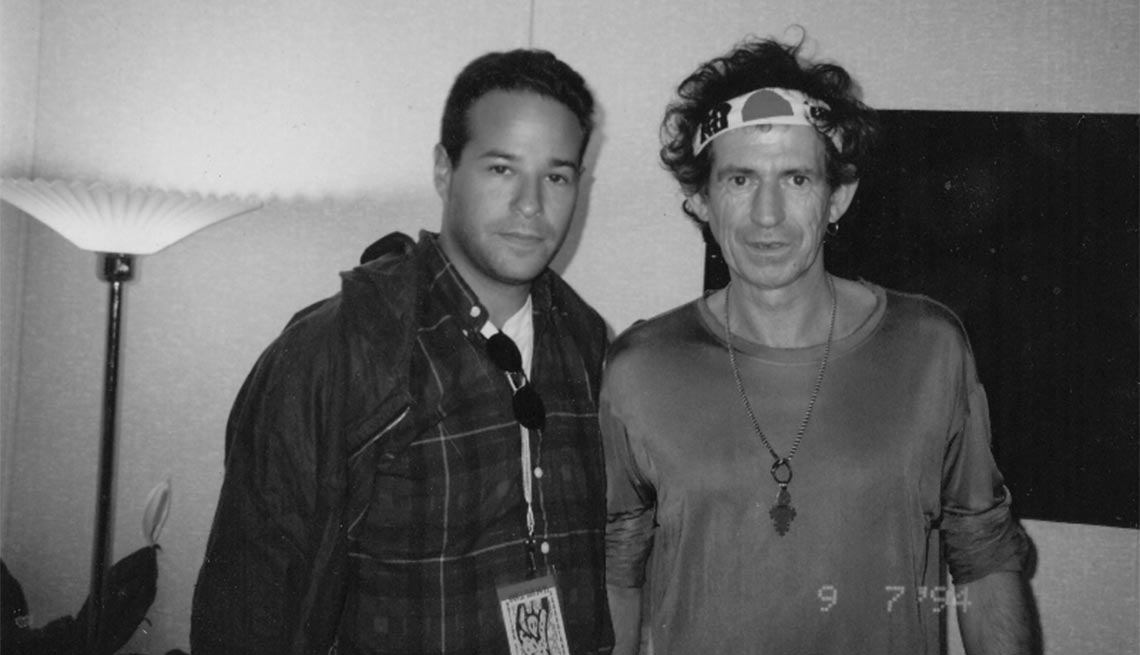 Rich Cohen posing with Keith Richards, one of his longtime music idols, in 1994.

Jagger and Richards were 50 years old. As I am writing this, I am 46. But I feel the same as I've always felt, whereas they seemed as old as a person can possibly get. The newspapers were filled with cracks about their creeping senility. One headline referred to them as the Strolling Bones. When I asked Keith about it, he scoffed. "On any given night, we're still a damn good band," he told me. "And on some nights, maybe even the best band in the world. So screw the press and their slagging about the 'Geritol Tour.' Wait until you get our age and see how you run. I got news for you, we're still a bunch of tough bastards. String us up, and we still won't die."

I spent a week in Toronto. Every day was the same. I woke at noon, hung out till 8 p.m., then went to the school to watch the Stones rehearse. Mick and I talked about the new record and the band's new label, the arithmetic of concerts and whether it's against type for a rocker to be involved in the business of the tour. "But to me, that's not business business," Mick said. "I think people get it kind of wrong when they say, 'Mick's interested in the business.' 'Business' is looking at the dollars and cents and how much you're getting and how much you're spending. I'm not interested in that. What I find interesting is making the whole thing work."

When you interview Mick Jagger, you become aware of a strange phenomenon. I suppose it has to do with the extent of his fame, his presence and persona, which make his most mundane utterance seem profound. As he talks, you look at your tape recorder and think, I'm a fisherman catching wonderful things in my nets. Every turn of phrase feels like a scoop summoned by your own trusting presence. But later, when those interviews are transcribed, you realize your nets are empty.

Interviewing Keith is the opposite of interviewing Mick. Mick is crystal clear; Keith is hard to understand. Mick's sentences are concise; Keith's are circuitous. Now and then he laughs for no apparent reason, as if the humor of his life has suddenly occurred to him, and that laugh often gives way to a coughing fit. He seems to proceed by free association, from non sequitur to non sequitur. When recording Keith, you worry you're getting nothing in your nets but catfish and perhaps a tire. But when those tapes are transcribed, you realize you've hauled in a bounty. Whereas Mick's answers, clear and precise, revealed little, Keith's mumbled responses were candid, sharp and surprising.

When I asked Keith about his feud with Mick, he said, "You make it personal, but from this distance it seems the main thing bugging Mick and myself, without us realizing, was knowing that we couldn't keep doing what we'd been doing forever. The band. We had to do something else if we wanted to take it further down the line; we had to be something else. We'd reached a plateau. At that point, after we'd gone off and made solo records, the band either breaks up or it weathers the storm. I never doubted it. Not really. But there was always that chance. All that infighting. We were trying to break out of the vacuum of being exclusively the Rolling Stones."

Keith sat in a velvet chair, red with ornate wooden arms, when we spoke — sat like a king in a fairy tale. A Telecaster is his scepter; a skull ring, his signet. Here's a monarch who's been too long at the banquet, getting high on mead. 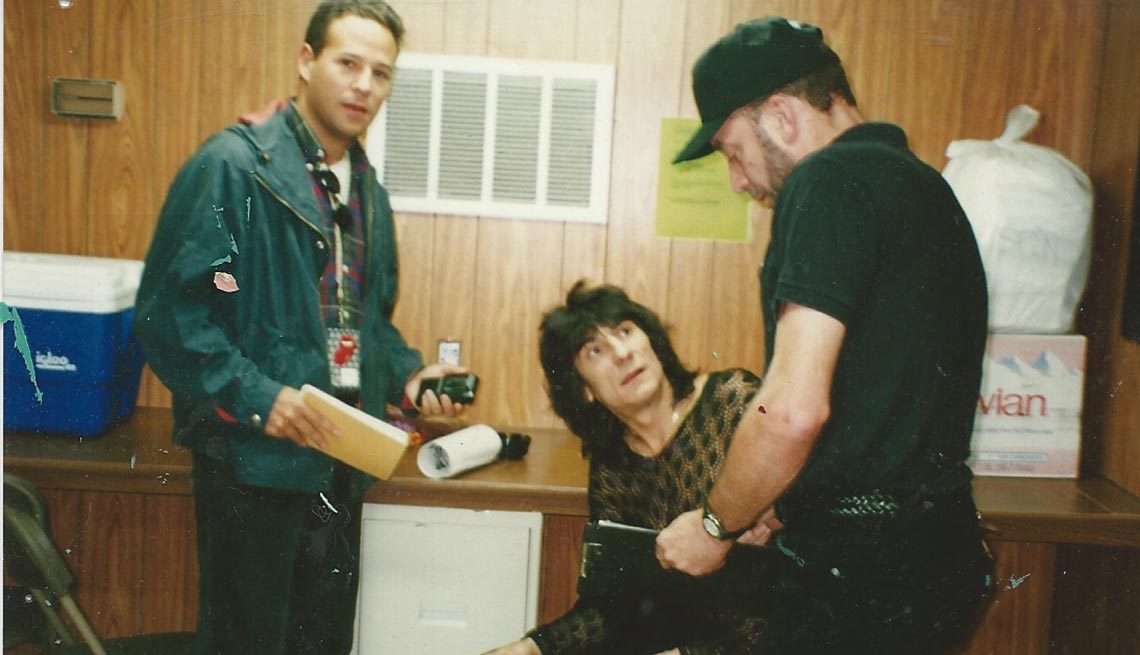 "You're talking to the madman," he told me, laughing, "the original f---in' lunatic."

Because I could not think of what to say, I asked him about his lifestyle.

"I haven't got a lifestyle," he said. "I'm just me. I do what I do. What's my lifestyle? I don't know. I drag it on a chain behind me. Junkie and madman, should be dead, mythical genius. It depends where you come from and how you look at me."

When the Beatles quit touring in the late '60s, John Lennon said the band had gone as far as it could on the road, but according to Keith, there is no end to the road. Rock 'n' roll lives only in front of a crowd. "We can't exist by ourselves," he told me. "We might sound fantastic in the rehearsal and who even knows? Only the band. We need the final ingredient, which, for the Rolling Stones, is the audience. It's that give-and-take: We take energy from them, then give it back. It's a two-way street."

He took a swig of something, grimaced, smiled, cleared his throat and then started asking me questions: When I tried to explain what the Stones have meant in my life — the poster in my brother's room, that first record — he interrupted me: "What year were you born?"

"I can't imagine that," he said, smiling. "It's weird. You should be answering questions for me. You tell me. I don't know. What's it like to live in a world where the Stones were always there? For you, there's always been the sun and the moon and the Rolling Stones."

Time distanced me from the Stones, but it gave me something, too. Perspective. Coming at the end means being able to comprehend the entire story. Rock 'n' roll was more than just a million garage bands, more than just Top 40 radio, more than just A&R men and record companies. It was an attitude and an age. The Stones were the greatest band of that age and, in a way, the only band that mattered, because, in them, you had both the ultimate and the ur, a group that can stand for all the others. If you tell their story, you tell the story. But you need perspective to do it. You have to know the end to understand the beginning. Evening light. Venus in the east. The story of the boomers told by Generation X. The Stones are a train rolling across a valley. I can see every car, the first and the last, the engine and the caboose, which gets smaller as it goes away.

From the book The Sun & the Moon & the Rolling Stones by Rich Cohen. Copyright © 2016 by Tough Jews Inc. Published by Spiegel & Grau, an imprint of Random House, a division of Penguin Random House LLC.

Rich Cohen is a contributing editor at Vanity Fair and Rolling Stone and a cocreator of the HBO series Vinyl.