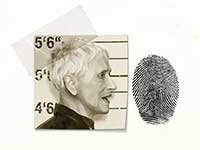 Excerpt from Brush Back

I didn't recognize him at first. He came into my office unannounced, a jowly man whose hairline had receded to a fringe of dark curls. Too much sun had baked his skin the color of brick, although maybe it had been too much beer, judging by those ill-named love handles poking over the sides of his jeans. The seams in the faded corduroy jacket strained when he moved his arms; he must not often dress for business.

"Hey, girl, you doing okay for yourself up here, aren't you?"I stared at him, astonished and annoyed by the familiarity. "Tori Warshawski, don't you know me? I guess Red U turned you into a snob after all." Tori. The only people who called me that had been my father and my cousin Boom-Boom, both of them dead a lot of years now. And Boom-Boom's boyhood friends — who were also the only people who still thought the University of Chicago was a leftist hideout.

"It's not Frank Guzzo, is it?" I finally said. When I'd known him thirty years and forty pounds ago, he'd had a full head of red-gold hair, but I could still see something of him around the eyes and mouth.

"All of him." He patted his abdomen. "You look good, Tori, I'll give you that. You didn't turn into some yoga nut or a vegan or something?"

"Nope. I play a little basketball, but mostly I run the lakefront. You still playing baseball?"

"With this body? Slow-pitch sometimes with the geriatric league. But my boy, Frankie Junior, Tori, I got my fingers crossed, but I think he's the real deal."

"How old is he?" I asked, more out of politeness than interest: Frank always thought someone or something was going to be the real deal that made his fortune for him.

"He's fifteen now, made varsity at Saint Eloy's, even though he's only a freshman. He's got a real arm. Maybe he'll be another Boom-Boom."

Meaning, he could be the next person to make it out of the 'hood into some version of the American dream. There were so few of us who escaped South Chicago's gravitational pull that the neighborhood could recite our names.

I'd managed, by dint of my mother's wishes and my scholarships to the University of Chicago. My cousin Boom-Boom had done it through sports. He'd had seven brilliant seasons with the Blackhawks until he injured his ankle too badly for the surgeons to glue him back in any shape to skate. And then he'd been murdered, shoved off a pier in the Port of Chicago, right under the screw of the Bertha Krupnik.

When Boom-Boom and Frank hung out together, Frank hoped he'd be a real deal, too, in baseball. We all did — he was the best shortstop in the city's Catholic League. By the time I started law school, though, Frank was driving a truck for Bagby Haulage. I don't know what happened; I'd lost touch with him by then.

Maybe he could have been a contender. He wasn't the only kid in South Chicago with a spark of promise that flared up and died. They start to spread their wings and then they fall to earth. It's hard to leave the world you know. Even if it's a painful place at times, you grow up learning how to navigate it. The world north of Madison Street looks good on TV, but it has too many hidden traps, places where a homey can make a humiliating mistake.

Perhaps Frankie Junior would have the drive, the mentors and the talent to be another Boom-Boom. All I said was I hoped Frank was right, it would be great. "You stayed in South Chicago?" I added.

"We moved to the East Side. My wife — uh, Bet — uh," he stumbled over the words, his face turning a richer shade of brick.

Frank had left me for Betty Pokorny when we were all in high school. Her father had owned Day & Night Bar & Grill. When the mills were running three shifts, no matter what time you got off or went on, you could get steak and eggs with a boilermaker.

When Betty started smirking at me in the high school hallway, I'd been heartbroken for a few weeks, but my dad told me that Frank wasn't right for me, that I was looking for love in all the wrong places because Gabriella had died a few months earlier. He'd been right: It had been years since I'd thought about either Frank or Betty.

Looking at Frank this morning, in his ill-fitting jacket and uneasy fidgeting, he seemed vulnerable and needy. Let him imagine that hearing about Betty could cause me a pang or two.

"Her ma passed a few years back, but her dad is still going strong, even without the bar — you know they had to shut that down?"

"Someone told me," I said. Day & Night had followed the mills into extinction, but by then I was so far removed from the neighborhood that I hadn't even felt Schadenfreude, only a vague pity for Frank.

"Her dad, he keeps busy, he's handy with tools, builds stuff, keeps the house from falling over. I guess you don't know we moved in with him when, well, you know."

When they got married, I guessed. Or maybe when Stella went to prison. "What did you do about your place on Buffalo?"

"Ma kept it. My dad's insurance or something let her make the payments while she was in Logan. I looked in on it once a week, made sure nothing was leaking or burning, kept the rats and the gangbangers from moving in. Ma says she owns it clear and free now."

"Yeah. Two months ago." His heavy shoulders sagged, further stressing the shoulders in the jacket.

Annie Guzzo had been three years younger than me and I was finishing my junior year of college when she died. I counted in my head. I guess it had been twenty-five years.

South Chicago was a neighborhood where violence was routine, ordinary. Stella Guzzo had grown up in a hardscrabble house herself and shouting and hitting were her main modes of functioning. We all knew she hit her daughter, but what turned people's stomachs was that Stella had beaten Annie to death and then walked up to St. Eloy's to play bingo. Not even my aunt Marie, Stella's chief crony, stood up for her.

"I never made those marks on my girl," Stella protested at the trial. "They're lying about me, making me look bad because I was trying to get Annie to see the facts of life. She was getting those big ideas, way above herself. She didn't think she needed to vacuum or do the laundry because she was going to school, but she needed to remember she was part of a family. Everyone has to carry their weight in a family. She's got a brother, he's the one with a future and he needs looking after, I can't do it all on my own, especially not with their father dead. But Annie was fine when I left the house."

Father Gielczowski, the priest at St. Eloy's, had testified for Stella: She was a good woman, a dedicated mother. She didn't spare the rod, but that was what made her a good mother; she didn't tolerate the rudeness a lot of modern women let their children get away with.

Priests usually play well with Chicago juries, but not this time. Stella was built on massive lines, not fat, but big, like the figurehead of a Viking ship. Frank took after her, but Annie was small, like their father. The state's attorney showed pictures of Annie's battered face, and the family photos where she looked like a dark little elf next to her mother's broad-shouldered five-ten.

Instead of manslaughter, the state went for second-degree homicide, and got it. I didn't remember the trial clearly, but I don't think the jury deliberated longer than half a day. Stella drew the full two dimes, with a little extra thrown in to punish her for her belligerent attitude in court.