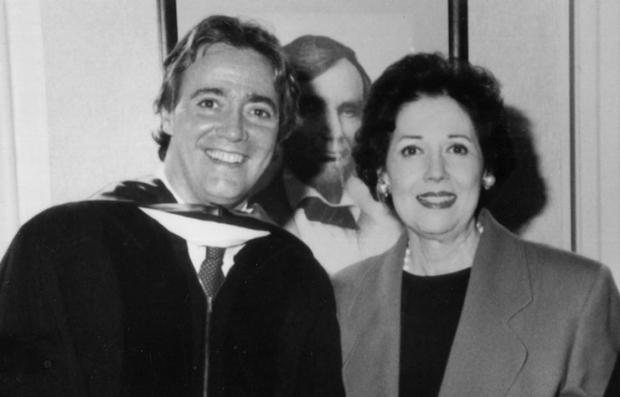 Author Scott Simon with his mother at his college graduation. Simon's new book is 'Unforgettable: A Son, a Mother, and the Lessons of a Lifetime.'

Drip, drip, drip — so many memoirs today read like leaky faucets of misery. They're all trouble, dysfunction and wounded feelings recalled in microscopic detail. Which is precisely why Scott Simon's new book, Unforgettable: A Son, a Mother, and the Lessons of a Lifetime, is so refreshing. It celebrates a happy if quirky childhood and its central beloved architect: Simon's mother, Patricia Lyons Simon Newman Gelbin. The daughter of a Chicago cop, she was a glossy looker who combined fun and glamour with wisdom and warmth.

Which isn't to say Simon, the host of NPR's Weekend Edition Saturday, and his mother bypassed life's harsher realities. His childhood had "all the ingredients you try to avoid," says Simon, 63. Unforgettable includes divorce, single motherhood, adultery, alcoholism and suicide. It also addresses the injuries to pride and person that aging in modern America amid its medical apparatus often inflicts. And yet, though the book ends with the death of Patricia at age 84 from lung failure in a Chicago hospital in July 2013, it brims with joy. "We had a helluva time in the hospital," says Simon in the buttery cadences of a professional broadcaster at his office in NPR's Washington headquarters.

One reason Simon decided to write Unforgettable: "It was a period I wanted to recapture, and I thought other people would enjoy reading about it." Simon had begun tweeting to his 1.2 million followers about his mother during her last days when she was in the ICU. A global sensation erupted. Among his more memorable tweets: "I am getting a life's lesson about grace from my mother in the ICU. We never stop learning from our mothers, do we?"

Was this an invasion of her privacy? No, says Simon, her only child. "My mother was not a shrinking violet." As a former actress, "she knew she was giving a great performance." There were moments of great humor, recalls Simon, "like when she said, 'Believe you me, those great deathbed speeches all have to be written in advance!' " And moments of wisdom. "She said I should spend more time talking to people in their 80s because, I will never forget this phrase, 'They have looked across the street at death for a decade. They know what's really important in life.' She would have wanted me to share that."

Simon felt that his mother, in her last days, was offering him — and the world beyond — a distillation of what she had learned during her time on Earth. "She spoke with the matchless authority of experience and the imminence of death," he writes.

Her life had been hard. Her marriage to Simon's father had ended because of his drinking when their son was 6. Simon remains grateful that his mother encouraged his relationship with his father — a failed comedian — who died when he was 16. Patricia paid the rent on a one-bedroom in Chicago by working a variety of jobs, from model to secretary to nightclub hatcheck girl. Strikingly attractive — her son has inherited her oversized chocolate eyes with the kind of eyelashes you need a toothpick to separate — Patricia also dated a lot of men, ranging from mobsters to blue bloods to lounge singers, before she remarried. Mother and son in the ICU stroll down memory lane about her many beaux with the risqué remembrances being more Mad Men than The Donna Reed Show. They also recall darker family secrets.

As Patricia aged, Simon realized "how difficult it is, in so many ways, to grow old in America." She hated the way people "begin to treat senior citizens like they are children." At one point, Patricia tells her son, "There's a tone in their voice when you get old and people call you 'lovely.' Like you've become some kind of lovely, crumbling old statue. They never see you as the person you were before you got trapped in this old body."

Simon has mixed feelings about his mother's ICU experience. The nursing staff and technicians "were utterly remarkable people. They helped usher my mother into a gentle death." But Simon and his mother were driven crazy by the endless tests and by doctors — mostly young residents — who couldn't give them a straight answer as to what was wrong with her. Treated for lung cancer with surgery and radiation, she had been declared cancer-free. But after she started losing weight, she had gone in for a blood test and been hospitalized. Sixteen days later she was dead from lung collapse. "I am not saying my mother could have lived even another day had her medical care been different, but I do think my mother deserved having one of her doctors or at least a senior physician walk in, look into her eyes and say we don't have any answers."

But Unforgettable isn't about modern medicine or death. It is about how to live. With his own two daughters, ages 11 and 8, in mind, Simon sums up his mother's wisdom at the end of Unforgettable: "Write thank-you notes. Tip well. Sing. Drink responsibly. Remember that good manners cost nothing, and open doors. Reach out to someone who is lonely. Make them laugh. Help people smile."

Good advice for us all.