Muhammad Ali mugs with the author in 1992.

Muhammad Ali is a magician. Until recently, throughout his years with Parkinson's disease, Ali surprised visitors by performing prestidigitations. He made a red silk scarf disappear from his hand, he bit coins in half and made them whole again, and he often performed an old parlor trick: By putting his feet together and rising up on the toes of one foot while keeping his other foot flexed, he could appear to float above the ground.

I've been friends with Ali for more than half my life and have watched him make magic hundreds of times. But even before we became friends, when he was simply my hero, he brought magic right into my life. It was in 1975, and I was hoping to become a world champion myself. At 22, I was a North Carolina–based junior-flyweight kickboxer and full of beans. My friend Bobby told me he could get me into the ring with the Champ for a sparring session, so I packed my Camaro and hit the highway.

Sign up for the AARP Leisure Newsletter — and get movie reviews, great games and more delivered to you every month.

Halfway through my one round of playful boxing with Ali, as he leaned sleepily on the ropes miming his rope-a-dope defense, I got cocky and threw him my right-spinning-backfist, left-backfist, left-hook combination. All three shots — two of them kickboxing blows Ali had never seen before — caught him flush. Opening his eyes fried-egg wide in feigned disbelief, he sprang off the ropes and thumped me with exactly one flyswatter jab, causing my legs to go to soup.

He could have then knocked me out with a single punch. Instead, knowing I was hurt, he draped a long arm across my shoulders and led me, looking freshly electrocuted, down the wooden stairs. Escorting me to a seat among the small crowd, he whispered, "You're fast. And you sure can hit, to be so little." He might as well have said he was adopting me. Davis Miller, 62, is the author of the newly published book 'Approaching Ali: A Reclamation in Three Acts.'

Then Ali climbed back into the ring, where he boxed his longtime sparring partner in a relaxed, dazzling round, bouncing dozens of jabs, right leads, easy hooks and effortless uppercuts off the man's headgear.

As the bell rang at the end of the round, Ali stepped to the center of his ring. "The man without imagination has no wings," he shouted, pointing down at the audience with his gloved left fist. "He cannot fly."

Still holding his glove at eye level — the glove he'd used to tattoo his opponent for the past three minutes — he rolled his hand over, bent his arm at the elbow and slowly pulled it in to his chest. As he opened his glove, a bird I now know to have been a Carolina wren fluttered up to the ceiling. The crowd oohed and aahed; I can't imagine anyone who was there will ever forget the experience.

And it brought me more magic: Years later I wrote my first-published magazine piece about the experience, starting me on the writing career that continues to this day.

I have another memory of Ali that resonates with almost everyone, and it, too, involves a bit of magic. It's mid-January 1992, the Champ's 50th birthday. My 6-year-old son, Isaac, and I are in our old Volvo, getting ready for our long drive back home after a two-day visit with Ali at his Michigan farm. Ali has played with my son hour upon hour, doing his various magic tricks, scaring and enchanting him with ghost stories ("I'm Frankenstein," Ali says. "I'm gonna eat you up!"), chasing him around the house, hiding behind furniture, jumping out to tickle him. "I used to wonder when I was gonna quit playing," Ali confides. "Used to sorta worry about it. Now I know I'm never gonna quit." 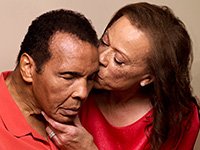 Boxing champion’s caregiving wife, Lonnie, shows what it means to go the distance with Parkinson’s disease

The entire time we've been at the farm, the wind has been rattling the bare branches of trees, and it's been snowing just enough to make the driveway slippery. Ali has escorted us out to the car in only shirtsleeves and slick-soled city shoes. With his Parkinson's disease, his balance isn't good; I'm concerned he might fall.

I turn the key in the ignition. He closes our doors. There's a video camera in the backseat. I grab it and push the power button: Ali sees the camera and opens Isaac's door, snatching up my son.

Ali places my laughing son back in his seat and points at the lens. "Watch my feet," he says in his classic Ali voice, the one he still manages to tug up from deep in his belly. He turns his back to Isaac, the camera and me, and takes about 10 labored, shuffling, great-grandfatherly steps.

There's a moment when the car engine seems to stop, the wind doesn't move, the air is not cold. Looking over his left shoulder, Ali raises his arms perpendicular to his sides. Then he levitates about three inches above the snowy driveway. And although I've seen him perform this illusion many times, I turn to my son and smile, as the most famous man in the world rises from the earth once more. Just for us.

— Davis Miller, 62, is the author of the newly published book Approaching Ali: A Reclamation in Three Acts.