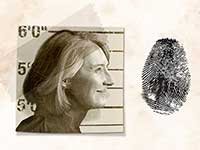 Arm up against the wiry branches whipping his face. He didn't see the root. He fell, hands splayed into the moss and mud. His assault rifle dropped and bounced and rolled from sight. Eyes wide, frantic now, Laurent Lepage scanned the forest floor and swept his hands through the dead and decaying leaves.

He could hear the footsteps behind him. Boots on the ground. Pounding. He could almost feel the earth heaving as they got closer, closer, while he, on all fours, plowed the leaves aside.

And then his bloodied and filthy hands clasped the barrel of the assault rifle and he was up and running. Bent over. Gasping for breath.

It felt as though he'd been on the run for weeks, months. A lifetime. And even as he sprinted through the forest, dodging the tree trunks, he knew the running would end soon.

But for now he ran, so great was his will to survive. So great was his need to hide what he'd found. If he couldn't get it back to safety, at least, maybe, he could make sure those in pursuit wouldn't find it.

He could hide it. Here, in this forest. And then the lion would sleep tonight. Finally.

Bang. Bangbangbang. The trees around him exploded, ripped apart by bullets.

He dove and rolled and came up behind a stump, his shoulder to the rotting wood. No protection at all.

His thoughts in these final moments did not go to his parents at home in the little Québec village. They didn't go to his puppy, no longer a puppy but a grown dog. He didn't think of his friends, or the games on the village green in summer, or tobogganing, giddy, down the hill while the mad old poet shook her fist at them in winter. He didn't think of the hot chocolate at the end of the day in front of the fire in the bistro.

He thought only of killing those in his sights. And buying time. So that maybe, maybe, he could hide the cassette.

And then maybe, maybe those in the village would be safe. And those in other villages would be safe. There was some comfort in knowing there would be purpose to this. His sacrifice would be for the greater good and for those he loved and the place he loved.

He raised his weapon, took aim, and squeezed the trigger.

The front line of his pursuers fell.

He leapt and rolled behind a sturdy tree, pressing so hard against it that the rough bark made a bruise on his back and he wondered if the tree might topple over. He hugged his rifle to his chest. His pulse pounding. He could feel his own heart in his ears. It threatened to drown out all other sounds.

Laurent tried to steady himself. His breathing. His trembling.

He'd been through this before, he reminded himself. And he'd always escaped. Always. He'd escape today. He'd get back home. And there he'd have a hot drink and a pastry. And a bath.

And he'd soak away all the terrible things he'd done, and was about to do.

His hand dropped to the pocket of his torn and muddy jacket. His fingers, knuckles scraped to the bone and bleeding, felt inside. And there it was. The cassette. Safe.

His senses, honed and heightened, instinctively took in the musky scent of the forest floor, took in the shafts of sunlight. He took in the frantic scramble of chipmunks in the branches above him.

What he no longer heard were footsteps.

Had he killed or wounded them all? Would he get home after all?

But then he heard it. The telltale snap of a twig. Close.

They'd stopped running and were now creeping up on his position. Surrounding him.

Laurent tried to count the feet, tried to estimate the number by the noise. But he couldn't. And he knew then it didn't matter anyway. There would be no escape this time.

And now he tasted something foreign. Something sour.

He had terror in his mouth.

He took a deep breath. In the moments he had left, Laurent Lepage looked at his filthy fingers clasped around the assault rifle. And he saw them, pink and clean, holding burgers and poutine and corn on the cob and sweet, silly pets de soeurs at the county fair.

And holding the puppy. Harvest. Named for his father's favorite album.

And now, at the last, as he hugged the rifle, Laurent began to hum. A tune his father sang to him every night at bedtime.

"Old man look at my life," he sang under his breath. "Twenty-four and there's so much more."

Dropping the rifle, he brought out the cassette. He'd run out of time. He'd failed. And now he had to hide the cassette. Falling to his knees, he found a tangle of thick vines, old and woody. No longer caring about the noise approaching, approaching, Laurent Lepage parted the vines.

They were thicker, heavier than he'd realized and he felt a spike of panic.

Had he left it too late?

He ripped and tore and clawed until a small opening appeared. Thrusting his hand in, he dropped the cassette.

"But I'm all alone at last," he whispered. "Rolling home to you."

Some glint inside the bramble caught his eye.

Something was in there. Something that hadn't grown, but had been placed there. Other hands had been here before him.

Laurent Lepage, his pursuers forgotten, knelt closer and bringing both hands up, he grasped the vines and yanked them apart. The creepers clung to each other, bound together. Years, decades, eons worth of growth. And concealment.

Laurent ripped, and ripped, and tore. Until a shaft of sunlight penetrated the overgrowth, the undergrowth, and he saw what was in there. What had been hiding in there longer than Laurent had been alive.

From The Nature of the Beast by Louise Penny, to be published on August 25, 2015. Copyright © 2015 by the author and reprinted by permission of Minotaur Books, an imprint of St. Martin's Press LLC.