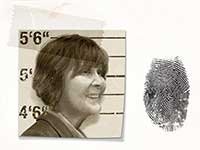 Salem is half small-town USA, with its steepled churches, family neighborhoods, and traditional New England values ... and half spook-town USA, with whole chunks of town devoted to the tourism industry built around the Salem witch hunts of the late 1600s.

Personally I don't buy into the witch thing, but Glo, the counter girl at Dazzle's, is smitten with the possibility that she might secretly be Samantha Stephens of Bewitched. Truth is, if Glo channels anyone from that television series, it's Aunt Clara. Glo is four years younger than me and is an inch shorter. So that puts her at 5-foot-4. She has curly red hair chopped into a short bob. She lives with a broom she hopes will someday take her for a flight over town. Her wardrobe can best be described as goth meets Sugar Plum Fairy.

I'm not nearly as colorful as Glo. I have blond hair that is almost always pulled back into a ponytail. My eyes are brown, my metabolism is good, and my wardrobe lacks imagination. White chef's coat, jeans, T-shirt, sneakers, and a sweatshirt if it's a chilly night.

Glo and I had closed up shop for the day, and her latest boyfriend, Josh Something, was giving us an after-hours tour of the Pirate Museum. Josh works as a guide in the museum and was in period dress ... a white puffy-sleeved shirt, black-and-red-striped breeches, and a grungy leather knee-length frock coat. His brown hair was long and pulled back into a ponytail at the nape of his neck, and he usually wore a patch over his left eye. Since we were the only ones in the museum, his patch was up on his forehead.

"And look here, my lassies," Josh said to Glo and me, pointing to a grim replica of an unfortunate pirate prisoner. "This be a fine example of pirate justice. 'Tis a nasty way to end a life. The lad would have been better off thrown to the sharks."

The prisoner's leatherlike skin was stretched tight over his skull and bony frame, and his mouth was open in a perpetual silent scream. The creepy mannequin was dressed in the sort of rags you'd expect to find on a desiccated corpse. And this phony-looking, partially rotted thing was stuffed into a flimsy cage that hung from a rusted chain attached to the ceiling. The rest of the room was filled with artifacts, both real and not so real. Cannons, cannon balls, maps under glass, cutlery, jugs of rum, a stuffed rat, coins in a small open chest, timbers, ropes, and weapons were all displayed in dim light.

"It's hard to get emotional over something that's so obviously fake," I said.

"I could try to put a spell on him to perk him up a little," Glo said.

A while back Glo found Ripple's Book of Spells in a curio shop, and she'd been test-driving Ripple's recipes ever since with varying results.

"It might help if you gave the cage a coat of Rust-Oleum," I said.

I reached up and touched the cage, there was some creaking, dust sifted down on us, and the chain separated from the bars. The cage crashed to the floor and broke into several pieces. The imprisoned dummy flopped out, its peg leg fell off, the skull detached from the neck, and its arm snapped in half.

We all gaped at the mess in front of us. The prisoner's leathery skin was split where the arm had cracked, and a bone was protruding.

"I think that be a human bone," I whispered.

It took the first cop five minutes to get to the museum. He was followed by three more uniformed cops, two plainclothes cops, a forensic photographer, and two EMTs.

Everyone stared down at the broken cage and the ghoulish guy with the bone sticking out of his arm, and everyone said pretty much the same thing . . . I was here a couple weeks ago with my brother-in-law, and I thought this was a fake.

By the time the coroner arrived, the area had been roped off with crime scene tape, and the body, which looked more like a giant Slim Jim than a human being, had been photographed and outlined in chalk.

The coroner was a pleasant-looking guy in a wrinkled gray suit and wrinkled white dress shirt. He was my height, probably in his late thirties, wore Harry Potter glasses, had sandy blond hair, and was soft enough around the middle to look cuddly. His name was Theodore Nergal.

Nergal slipped under the crime scene tape and knelt beside the corpse. "Yep," he said. "This guy's dead."

One of the plainclothes cops looked over the tape. "It's a real flesh-and-blood body, right?"

Nergal nodded. "It was flesh and blood before someone decided to try his hand at mummification. Now it's tanned hide and partly calcified bone." He pulled on disposable gloves, picked the skull up, and examined it. "There's an entrance wound in the back of the head where he's been shot." He shook the head, and there was a rattling sound, like dice in a cup. He tipped the head forward, and a small lump of misshapen metal fell out of the man's mouth and plopped into the coroner's hand. "This is a Lubaloy round manufactured only in the 1920s," Nergal said. "This man was shot some ninety years ago."

"Wow," Glo said. "I guess you'll put out an APB for a perp with a walker and a hearing aid."

Nergal set the skull in the vicinity of the corpse's neck and stood. "Who found this?"

"We did," I said. "Josh works in the museum, and he was giving us an after-hours tour. I touched the cage, and it came crashing down."

His eyes widened. "Do you make the red velvet cupcakes?"

"I love those cupcakes!"

Nergal went back to examining the Slim Jim, and Glo elbowed me. "He loves your cupcakes," she said.

"He's not wearing a wedding ring."

"Okay, so he examines dead people all day," Glo said. "Nobody's perfect. He probably has all kinds of interesting hobbies."

"Really," he said. "I'm addicted to your cupcakes."

Glo elbowed me again. "I think he might be flirting with you," she whispered.

"I'll stay with you," Glo said to Josh. "This is just like one of those CSI shows."

I gave everyone a wave goodbye and walked out of the museum into the warm July night. The streetlights cast little pools of light onto the shadowy sidewalk. One of the lights flickered just as I reached it, blinking out twice before flaring back to life, brighter than ever.

I felt a chill ripple down my spine and goose bumps erupt on my arms when a man appeared under the streetlight. He was deadly handsome in a scary sexy-vampire sort of way. He had pale skin, piercing dark eyes, and shoulder-length raven-black hair that was swept back from his face. He was dressed in a perfectly tailored black suit with a black dress shirt. I knew him, and there had been times when I'd thought his soul might be black as well. His name is Gerwulf Grimoire. Mostly known as Wulf. He entered my life shortly after I moved to the North Shore. He'd introduced himself, touched his fingertip to the back of my hand, and left a burn mark. The scar is still there.

"I'm sure that's not true," Wulf said, "but I appreciate the lie. I'm here to relieve you of the coin."

"What coin? What are you talking about?"

Wulf studied me for a beat. "You really don't know, do you?"

"I assume you're not looking for a nickel or a dime."

"Hardly. You'll know soon enough about the coin. I'm sure my cousin Diesel is looking for it as well and will enlist your aid. If you're smart, you won't get involved. Consider this a warning."

"I'm not afraid of you." Another lie.

"I'm the least of your worries," Wulf said.

There was a pop and a puff of smoke, and Wulf was gone. Vanished.