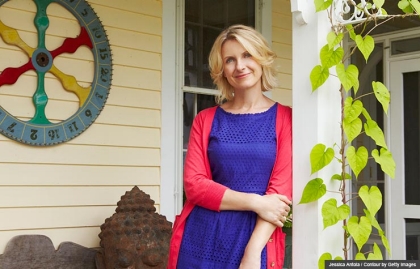 Alma Whittaker, born with the century, slid into our world on the fifth of January, 1800.

Swiftly — nearly immediately — opinions began to form around her.

Alma's mother, upon viewing the infant for the first time, felt quite satisfied with the outcome. Beatrix Whittaker had suffered poor luck thus far generating an heir. Her first three attempts at conception had vanished in sad rivulets before they'd ever quickened. Her most recent attempt — a perfectly formed son — had come right to the brink of life, but had then changed his mind about it on the very morning he was meant to be born, and arrived already departed. After such losses, any child who survives is a satisfactory child. 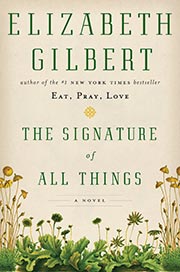 Holding her robust infant, Beatrix murmured a prayer in her native Dutch. She prayed that her daughter would grow up to be healthy and sensible and intelligent, and would never form associations with overly powdered girls, or laugh at vulgar stories, or sit at gaming tables with careless men, or read French novels, or behave in a manner suited only to a savage Indian, or in any way whatsoever become the worst sort of discredit to a good family; namely, that she not grow up to be een onnozel, a simpleton. Thus concluded her blessing — or what constitutes a blessing, from so austere a woman as Beatrix Whittaker.

The midwife, a German-born local woman, was of the opinion that this had been a decent birth in a decent house, and thus Alma Whittaker was a decent baby. The bedroom had been warm, soup and beer had been freely offered, and the mother had been stalwart — just as one would expect from the Dutch. Moreover, the midwife knew that she would be paid, and paid handsomely. Any baby who brings money is an acceptable baby. Therefore, the midwife offered a blessing to Alma as well, although without excessive passion.

The book that most changed my life was actually a series of books — the complete Wizard of Oz series, by L. Frank Baum.

My family had a vintage collection of these books, passed down through many generations of hands, and I read them all with rapt passion. I well remember being bundled up in a blanket next to our woodstove in Litchfield, Connecticut, on cold winter weekends, lost in these marvelous tales. These books taught me to love reading, but more important, they taught me to love adventure, and to believe in the heroism of adventurous little girls from small family farms (not unlike my own) who were able to set out on wild voyages of discovery. When I eventually threw myself out into the world, to go on my own wild voyages of discovery, I do believe that the spirit of Dorothy Gale came with me.

I am forever grateful to my grandparents, my great-aunts and my great-uncles, who saved these gorgeous and crumbling old books for my enlightenment, my inspiration and my education.

Hanneke de Groot, the head housekeeper of the estate, was less impressed. The baby was neither a boy nor was it pretty. It had a face like a bowl of porridge, and was pale as a painted floor. Like all children, it would bring work. Like all work, it would probably fall on her shoulders. But she blessed the child anyway, because the blessing of a new baby is a responsibility, and Hanneke de Groot always met her responsibilities. Hanneke paid off the midwife and changed the bedsheets. She was helped in her efforts, although not ably, by a young maid — a talkative country girl and recent addition to the household — who was more interested in looking at the baby than in tidying up the bedroom. The maid's name does not bear recording here, because Hanneke de Groot would dismiss the girl as useless the next day, and send her off without references. Nonetheless, for that one night, the useless and doomed maid fussed over the new baby, and longed for a baby herself, and imparted a rather sweet and sincere blessing upon young Alma.

Dick Yancey — a tall, intimidating Yorkshireman, who worked for the gentleman of the house as the iron-handed enforcer of all his international trade concerns (and who happened to be residing at the estate that January, waiting for the Philadelphia ports to thaw so he could proceed on to the Dutch East Indies) — had few words to say about the new infant. To be fair, he was not much given to excessive conversation under any circumstances. When told that Mrs. Whittaker had given birth to a healthy baby girl, Mr. Yancey merely frowned and pronounced, with characteristic economy of speech, "Hard trade, living." Was that a blessing? Difficult to say. Let us give him the benefit of the doubt and take it as one. Surely he did not intend it as a curse.

As for Alma's father — Henry Whittaker, the gentleman of the estate — he was pleased with his child. Most pleased. He did not mind that the infant was not a boy, nor that it was not pretty. He did not bless Alma, but only because he was not the blessing type. ("God's business is none of my business," he frequently said.) Without reservation, though, Henry admired his child. Then again, he had made his child, and Henry Whittaker's tendency in life was to admire without reservation everything he made.

To mark the occasion, Henry harvested a pineapple from his largest greenhouse and divided it in equal shares with everyone in the household. Outside it was snowing, a perfect Pennsylvania winter, but this man possessed several coal-fired greenhouses of his own design — structures which made him not only the envy of every plantsman and botanist in the Americas, but also blisteringly rich — and if he wanted a pineapple in January, by God he could have a pineapple in January. Cherries in March, as well.

He then retired to his study and opened up his ledger, where, as he did every night, he recorded all manner of estate transactions, both official and intimate. He began: "A new nobbel and entresting pasennger has joyned us," and continued on with the details, the timing, and the expenses, of Alma Whittaker's birth. His penmanship was shamefully crabbed. Each sentence was a crowded village of capital letters and small letters, living side by side in tight misery, crawling up on one another as though trying to escape the page. His spelling was several degrees beyond arbitrary, and his punctuation brought reason to sigh with unhappiness.

But Henry wrote up his account, nonetheless. It was important for him to keep track of things. While he knew that these pages would look appalling to any educated man, he also knew that nobody would ever see his writing — except his wife. When Beatrix recovered her strength, she would transcribe his notes into her own ledgers, as she always did, and her elegantly penned translation of Henry's scrawls would become the official household record. The partner of his days, was Beatrix — and a good value, at that. She would do this task for him, and a hundred other tasks besides.

God willing, she would be back at it shortly.

Paperwork was already piling up.

'The Signature Of All Things" by Elizabeth Gilbert. Reprinted by arrangement with Viking, a member of Penguin Group (USA) LLC, A Penguin Random House Company. Copyright © Elizabeth Gilbert, 2013.