He's about as likable a man as you'll ever chat with. Regis Philbin is personable, attentive and charming. He's also a great listener – something his long-ago boss, Joey Bishop, famously complimented him for when Regis was first interviewing for the job of television sidekick on the late-night The Joey Bishop Show.

See also: Excerpt from How I Got This Way. 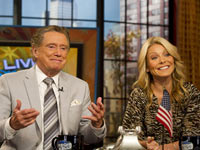 "A great listener — that was my talent!" Regis recalls thinking. "That was it?"

That "it" helped the Bronx-born boy who loved listening to Bing Crosby during the Depression become a household name during the course of his nearly 17,000 hours on television, whether he was working in Los Angeles (where he was based for 28 years) or in his own New York City (where he worked for another 28). And now, at 80, he's chosen to step away from his longtime regular television gig — to the chagrin of millions of Americans of all ages who have enjoyed his storytelling, his interviews with both A-listers and unknowns, and his on-air cavorting with multiple cohosts over the years, including Kathie Lee Gifford and Kelly Ripa.

During the last week on Live! with Regis and Kelly, Regis spoke with AARP Bulletin about his life and his work — and shared a few secrets:

Q. How have you aged so well?

A. I gotta tell you, right at the top of my list would be taking vitamins. I know that over the years doctors have said they're ridiculous and all that. But I started taking my vitamins at an early age. And I take them every day. Every bloody day! So I think that's number one. For whatever reason, I feel active and pretty good at my age.

Q. Clearly these are not just regular multivitamins?

A. No, these are vitamins for every capacity you think you need. I get my vitamins from a company that has been doing this for 100 years — the Lindberg Nutrition Center in Torrance, Calif. They really know their stuff, and it's just one of these things I've gotten attached to. I'm in the habit now. When I first started taking my vitamins, I saw a change. I saw a difference in both my body and my mind. So I became a vitamin follower.

Q. How else do you take care of yourself?

A. Well, I work out three to four times a week, in a gym, which — thank God — is right in my building here in New York City. It's in the Reebok building, and it's got every kind of weightlifting equipment you can imagine, spread out over six floors, plus basketball courts and everything else. And because it's right in the building, there's no excuse.

Next: What are the secrets of successful people? >>

Q. What are the secrets of successful people, would you say — their traits, their qualities?

A. I believe attitude has a lot to do with it. People who accept difficult jobs and overcome difficulties — I respect the way they do that and I've been influenced by it. Three coaches at Notre Dame made a big difference in my life, not that I played any football when I attended Notre Dame. But Frank Leahy, Ara Parseghian, and Lou Holtz — they all made a difference to me and I respected them for their attitudes about life and how they handled loss. Not to mention some of the great show business people that I met along the way, too.

Q. You've always given people a fair shake and allowed them to really shine on your show. How did you do that?

A. You're absolutely right about that, not that I did it so well, but that I tried. The reason I tried is I wanted those guests to look better than they did on anybody else's program. Even though it was just a little simple 9 o'clock in the morning show, yeah, I worked extra hard on that, not only for their value but for our value as well.

Q. Your book shares so many fun stories about people you've worked with over the years — David Letterman, Jerry Seinfeld, Don Rickles, Jack Nicholson, Steven Spielberg, and so many more. What's the secret of being able to get along with so many "big" personalities?

A. Well, when you're in television all your life and you conduct all these interviews, it's like a study in mankind. You're handling all different types of personalities. And so you've gotta make allowances here and there, if somebody's a little more uptight than another person, or somehow a little different. But they're all basically the same. And over the years I guess that has helped me assimilate people into my own friendships.

Q. You say that everybody is just trying to make their own path in life — to find their own way. Why is that so important to remember?

A. I had my years of struggling. Some of my shows failed miserably, and I was upset by it and it dented my confidence. But I never stopped. I kept going for it. And when I returned to New York from Los Angeles, I mean, it was make it or not — that was my last chance. And what a great chance it was, to make it in my own hometown. I knew by that point in my life that I had to be live on television. I couldn't have anybody writing for me; that didn't make sense. I couldn't deliver a joke if you asked me to. It would have to be live and spontaneous. And that's what I was able to have in New York, at 9 o'clock in the morning, and people all over the country seemed to respond to it.

A. Well, by that time I had kind of mastered it, I think, and whatever came out, came out.

Maureen Mackey is a writer and editor based in New York.