David V. Picker, backstage with the Beatles at New York's Paramount Theatre in 1964, the year he brought the band to the big screen in "A Hard Day's Night."

David V. Picker once dined with Frank Sinatra, Marilyn Monroe and Clark Gable. John Huston and Arthur Miller were there, too. Montgomery Clift was invited, but couldn't make it.

Picker, clearly a Hollywood player, has a new memoir full of such eye-popping anecdotes, Musts, Maybe and Nevers: A Book About the Movies.

The 82-year-old New Yorker started out in the early 1960s as an assistant at fledgling United Artists, the renegade indie film company cofounded by his uncle, Arnold Picker. During his long career, David Picker was president of four major film companies — UA, Paramount, Lorimar and Columbia — and had a long run as an independent producer. You may not know his name, but you know his work.

Does James Bond ring a bell? As a young UA exec, Picker struck the deal that birthed the 007 franchise.

The Beatles? Picker brought them to the big screen.

That legendary flop Ishtar? He took over Columbia Pictures just before it was released.

He oversaw plenty of hits too — his first project at UA was Tom Jones, which won the Oscar for Best Picture. Picker, naturally, accepted the trophy at the star-studded ceremony. 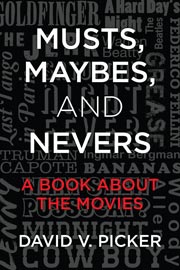 Now a grandfather and married to Sandra, his wife of 50-plus years, Picker is reflective when we talk about his new book and his life in the movies.

Q: On your first business trip with UA you end up at dinner with Sinatra and Marilyn. That's quite an introduction to showbiz.

A: Not a bad first trip! They were filming The Misfits at Lake Tahoe for us and I tagged along with my boss. Even for a kid brought up in the entertainment world and seeing all the stars who played the Broadway theaters, sitting at that table was really something.

Q: You signed the Beatles to a film deal just before their popularity exploded around the world. Lucky break?

A: We were trying to sign some groups to give our new record and music company some muscle, and someone told us about this group from Liverpool. Of course, somebody would have signed them to a movie deal had we not gotten to them. But I do not believe anybody would have made a movie like A Hard Day's Night.

Q: It's still considered one of the great rock 'n' roll movies ever made.

A: That's because of [director] Dick Lester. He was the person I wanted to make the film. He found a really fun way to express the Beatles cinematically. It turned out to be pretty damn good. 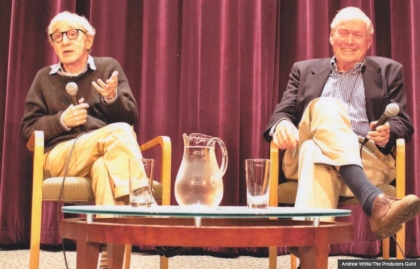 A young Woody Allen received his first-ever movie deal from David V. Picker. Years later, they appeared together at a Producers Guild of America event.

Q: Early in your career at UA, you helped make the deal with producer Cubby Broccoli to distribute the James Bond films. And you championed a film — Tom Jones — that won Best Picture. Did you have any idea how successful those projects would be?

A: I don't think anybody can judge it when you're that close to it. Tom Jones was not a complicated situation. The script was terrific. It was the first film I fought for. All the major studios had passed on Bond at various points. It's a very tough business, and a lot of success or failure has to do with things you can't possibly foresee. Anybody who thinks they really have the answers is a fool.

Q: At UA, you signed Woody Allen to his first movie deal. Later you produced The Jerk, Steve Martin's first movie. It seems like you took pride in discovering new artists.

A: Both of them are so talented. They would have become stars without me. But I don't know what you can get more pleasure from than from giving someone the opportunity to fulfill their dreams, and then seeing them succeed.

Q: Of which films are you most proud?

A: There are movies I don't think would have been made had we not done them at United Artists: certainly Midnight Cowboy and Last Tango in Paris.

Q: Are there successes that you think were overlooked?

A: Up in Smoke was probably the most fun for me, on a personal level. I had tried to make a Cheech and Chong movie when I was at UA. It was too soon. Years later, when I was at Paramount, I asked again. I told [their agent] Lou Adler he should direct it. He had never done a movie! We gave him a cameraman. We gave him an editor. The boys trusted him. And of course it was a gigantic hit. We got lucky.

Save on DVDs & Blu-ray discs, e-readers and more

Q: Reading your book, I was struck by the idea that it could make a fun movie, whisking people through 50 years of Hollywood history.

A: [Laughs] I do not see a script in there! But it's sure fun to talk about.