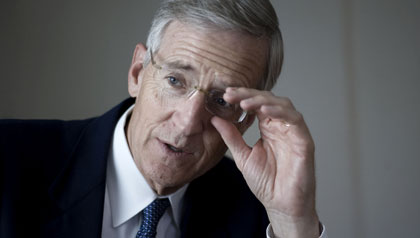 Veteran journalist Evan Thomas explodes the stereotype of Dwight D. Eisenhower as "Granddad in a golf cart" in a readable new biography of the 34th president, Ike's Bluff: President Eisenhower's Secret Battle to Save the World. Far from being "the do-nothing, platitude-spouting, syntax-mangling, over-the-hill oldest man ever to occupy the White House," writes Thomas, Eisenhower was a canny card player and master manipulator who used the threat of nuclear war to preserve world peace.

We asked Thomas —  who wrote more than 100 cover stories on wars, scandals and presidential elections in his 24 years at Newsweek — to explain how the "outwardly amiable but inwardly seething" Eisenhower managed to "safeguard his country and possibly the rest of mankind from annihilation."

Evan Thomas: I was talking to John Newhouse, who knew Andrew Goodpaster, Ike's staff secretary (and really his national security adviser). Goodpaster had confided in Newhouse, "You know? All these years Eisenhower never told me whether he would have used nuclear weapons or not."

And I thought, "Wow! Here's the first guy with the power to destroy the world, and he's never going to tell anybody whether he's going to use it." It's logical, when you think about it: How can you have a good deterrent if you tell people when you plan to use it?

AF: Did bottling things up like that cause his health problems?

ET: Absolutely. Stress has to go somewhere, and his went to his stomach. Eisenhower projected this aura of calm strength, but his stomach was tearing him up inside. When he had to give an important speech —  like his "Chance for Peace" speech in April 1953 —  his stomach acted up so much he could barely finish it. His hands gripped the lectern. He started sweating. He began skipping pages. The aides watching him wondered, "Man — is this guy gonna make it?"

Next: Eisenhower's son, John, provides his frank take on Ike. »

ET: First off, Ike's basic insight as a military man was that small wars lead to big wars, so he wanted to avoid little wars. Two, he didn't want to spend a lot of money on armaments and soldiers. Third, he feared the "garrison state," as he put it — the idea that the military would get so powerful it would take control.

All these reasons made him not want to build up armies and fight conventional wars, but how do you avoid that? Ike's solution: You bluff with nuclear weapons. It's called massive retaliation. The doctrine was enunciated by Secretary of State John Foster Dulles, but written behind the scenes by Eisenhower. It was a pretty clear threat: "If you attack us anywhere, we feel justified in using nuclear weapons against you."

AF: You've said that "the misimpression of Ike as a genial dope has been remarkably enduring." Is Eisenhower enjoying a "reputation rehab"?

ET: Yes — it could even happen to Nixon! When Truman left office, his approval rating was in the low 20s. But over time, people came to understand Truman's gifts —  his gritty, regular-guy courage. You can see it happening right now with the Clintons. And it's happening with Eisenhower, frankly. Mine is one of several books that look back at Ike and take a more benign view.

But I'm not the one who discovered this. The scholars have known for 30 years that Eisenhower was a much tougher, wilier, smarter, better president than the public realized.

I'm a Kennedy fan, so I don't mean to be too hard on them, but when the Kennedys were coming in in 1961, they did a brilliant job —  a hatchet job — of driving home the contrast between vigorous, young, charming, coatless JFK and the slower-moving Eisenhower. It was a useful contrast for them, but an unfair one.

AF: But Eisenhower didn't do much to dispel it, right? Your premise seems to be that he didn't care about the image he created as long as the result was world peace.

ET: Well, I believe that Ike was capable of a kind of confidence that is so true it allows you to be humble.

AF: You drew partly on accounts by his personal physician, Howard Snyder, to sketch this new portrait of Ike.

ET: Right. Dr. Snyder kept a daily diary from Ike's heart attack in September of 1955 to the time he left office in 1961. His doctors worried that Ike would have another heart attack from stress, so Dr. Snyder carefully recorded the presidential mood every day. You can imagine how useful that is to a biographer.

ET: Right. One time at lunch we were talking about the balance between the sunny, genial Ike and the cold-blooded Ike. John thought for a moment, then smiled and said, "Make that 75 percent cold-blooded."

John was a great guide in helping me understand the many levels upon which Eisenhower operated. He once told me, "Good luck trying to figure out Dad. I'm still working on it." He was 90 years old at the time.