It's a brave, old world — and the ramifications are mind-boggling.

Our lives are changing rapidly as a result of mankind's greatest gift to itself, the engineering of longer life spans, according to veteran journalist Ted C. Fishman in the thought-provoking Shock of Gray. As huge numbers of people age, they need services, products, care and time specifically targeted to their needs. Those needs impact the rest of the population, as the burden of physical, emotional and mental care of the older age group falls to everybody else in one way or another. Affected are families, jobs, livelihoods, neighborhoods and more.

In this country, the numbers are significant. In 2010, America's population of people between ages 75 and 85 reached 17 million, says Fishman, citing statistics from the U.S. National Institute on Aging. But that's a mere blip compared to what's coming down the pike. Forty years from now, by the year 2050, America's population of the very old will hit 30 million. If our current population remained steady, that would be a tenth of the people in the country.

If that isn't startling enough, the institute also predicts that by that same year, there will be 2.5 million people over the age of 100. "Every age group over 65 will grow much faster than the general population," Fishman says, "but the numbers of the oldest-old, people over 85, will proportionately grow most." In the more developed countries, the estimated number of people 100 and over has doubled every decade since 1950, according to "Why Population Aging Matters: A Global Perspective," a National Institute on Aging report.

Fishman has interviewed gerontologists, health care officials, economists, small-business owners and many other experts to present a vivid picture of the implications of an older world. In America, the new dynamic means more wrinkles and more worries, more fresh challenges and more competition globally — and worrisome trends in the workplace. Fishman spoke with the AARP Bulletin about his new book and his findings — and about where we're headed.

(Read an excerpt from Shock of Gray.)

Q. We shouldn't be surprised by the numbers you're citing — after all, we knew this was coming — and yet we are. Why?

A. Think about what defined America and the world just 10 or 20 years ago. It was Silicon Valley. The youthful entrepreneurs were going to deliver us. They were going to be the dominant feature of our cultural landscape. And then the older CEOs bought all of these tech companies that went belly up. The truth is, it is just really hard for people to plan for their old age. They can certainly plan for retirement. But they don't necessarily have a clear mental vision of themselves in old age. 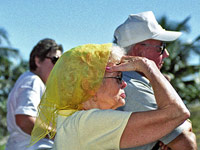 A. For most of us, our idea of our older selves stops somewhere around the early 80s. People just don't imagine themselves as 90-year-olds or 102-year-olds. It's alien territory to most. There haven't been many others to compare ourselves to, until fairly recently.

Q. You say that globally, by the year 2040, "the population of demented will climb to 81 million." That's a huge number.

A. It's very disproportionate to population growth. The statistics that apply to old age are going up geometrically, at an accelerated rate. The dementia figure to me was sobering for a lot of reasons. It's a huge burden of misery that the world will have to carry.

It also affects the rest of the population and how we function as a workforce. Among other things, communities turn really aggressively to making their hospitals their most vital employer.

Q. That seems to make sense.

A. And their citizens demand it, their local businesses want it, and it's the one place where they can draw youthful money to their aging community. If a community is withering because industries have moved out, it can import American money into it by serving an older population.

Q. You got the idea for this book when in China. How did that happen?

A. I was impressed by the fabulous, ever-growing, dynamic cities of youth — Beijing, Shanghai, many others. They seemed to be attracting an unremitting flow of young people from the countryside. The executives from foreign companies were so happy to have all these young workers toiling away in their businesses. They'd say, "It's not like back home, where everybody's fat, and they smoke, and they're so expensive."

Q. They had a bias toward youth.

A. Yes. It was a kind of arbitrage going on, an actual selection process. A decision was being made to shed the burdens companies have with older workers, and to hire hundreds of millions of hard-working people in China, as well as to invest a trillion dollars or so to create an urban infrastructure. Maybe globalization is in some ways a sophisticated form of age discrimination, I thought. That was the kernel. The countries that win in globalization now are the countries that do the least for their older people.

Q. Clearly, this includes the U.S.

Q. So what does the older American worker who wants to work and has something valuable to contribute do to remain a vital employee in this reality?

A. Older workers have a justifiable reputation for being relatively poor learners when it comes to technology. But if retirement is not on their horizon, they become much better learners. So if you think, I'll only need these skills for a few years, then that translates into a cognitive limitation. But if you view it as skills that you need and are going to use constructively for some time, you will learn far better.

Q. Yet workers today need to acquire most of those skills on their own, since most companies no longer have budgets for training, as they used to.

A. That's true. But the older worker must get those skills somehow. It's a kind of career insurance to survive. If you view a job as just something that keeps you working, you'll be shoved into the second tier of the economy and make 20 percent to 50 percent less than you did before, if you get any job at all. But if you work to make yourself valuable, you'll have a much better shot.

Q. What kinds of workers have the best shot?

A. Those with higher skill levels have the more durable jobs — the accountants, lawyers, engineers — as opposed to the service industry, where people work in less-skilled, more manual jobs.

Q. The service sector is growing, offering opportunities for many older workers. Your thoughts?

A. There's another form of age discrimination at work here. The world is really smart at disemploying older people when they're too expensive, and incredibly smart at employing them when they're a bargain. The way you make them a bargain is to convert them into a giant contingent workforce, in which they're bound to part-time jobs, and minimum wage jobs, and contract work. That way, you get rid of whatever pension plan and other benefits they had when they were shoved out of the workforce.

Q. So a 72-year-old man now working at a shop down the street is right in the middle of this.

A. If you see a 72-year-old "shop boy" sweeping with a broom, don't think he's a shop boy. He's somebody who once had a career, and now he's working this job for half his wage because he needs to. Wherever you look in America, this scenario is at play. We can't get away from the aging of our country.

But on the other hand, this happens to be the result of the most wonderful thing humankind could ever give itself, which is more years on the planet for all of us — that, and the emancipation of women. So overall, this is real progress for the world.

Q. You say we need young Americans to look after the growing ranks of older Americans. Can our society accommodate this?

A. There's a lot of good will with families, but how they actually operate varies. If the professional or social service network is advanced enough, families can manage these things. Of course, there's a lot of stress and injury that comes with the caregiving job. It ripples down through the family and eventually it hits somebody who's in the heart of his or her career.

Q. Why is "family reciprocity" — a term you use — so important?

A. Grandparents are often enlisted as low-cost care providers for younger families. Sometimes they want to do it, and other times they really don't. But sometimes it's all a family can get. One of the universal motivations in the U.S. is, "Is this an investment for the time when I am needy? Will there be some family reciprocity? If I can be an effective grandparent, maybe there's some hope for me."

Q. Education, you say, "has replaced the big family as the world's insurance for old age." How so?

A. When urban families decide to have fewer children, they do so for a classic reason — children are a liability, not an asset. They cost money. They don't support you by working the family farm. But if you have fewer children, you can invest more in their education. And when you do, you almost ensure that they'll have a small family themselves, because their education takes time. Add all of that together, plus the fertility window that closes on women, and you have this family investment. A person can earn enough to help pay for care and save for their old age themselves. It's a kind of double insurance.

Q. Decent health coverage, of course, will remain critical. How does that figure into the scenario you just mentioned?

A. Bad things do start happening to very large numbers of people in their 60s and 70s. So even while we can focus on a big group of the older population as being able, dynamic, wonderful and inspiring, we have to acknowledge that there is also a very, very large group that is dependent. They may not be completely dependent — they may be able to have fine lives — but a fine life is not the same as a life that's economically valuable in the workplace.