En español | Urgency. It’s a quality that thrusts a reader through Justin Torres’s slim 125-page debut novel and is refreshing given its absence from much contemporary fiction. 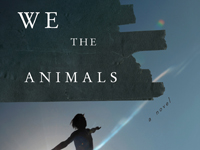 We the Animals opens with an unnamed narrator, the youngest boy in a family of five, introducing the reader to his family in upstate New York: his mother, father and two older brothers. Times are tough, and the boys are hungry — for food, laughter and love. The mother works graveyard shifts at a brewery and often confuses night and day, telling the boys to brush their teeth and get into their pj's in the middle of the afternoon and threatening the boys when they contradict her. At his best, the Puerto Rican father cooks while dancing to Tito Puente with the boys, but at his worst bruises the mother and abandons the family for days.

Like a pack, these boys stick together to survive family hardship while unleashing their own particular brand of havoc. As if to underscore their unruly solidarity, the narrator describes the brothers as a “three-torsoed beast” and often narrates from the plural “we” point of view of the title. But as the novel progresses and the narrator reveals his true nature, the
three-torsoed “we” becomes a severed “I,” and the reader understands that life for this family will never be the same. Interspersed with all the heartache, however, are moments brimming with hard-won tenderness as this family fights to love one another — with the literal and figurative cuts and bruises to prove it.

With vignette-like chapters and coming-of-age concerns, comparisons to Sandra Cisneros’s The House on Mango Street are inevitable. Like that modern classic, these 19 chapters add up to more than the sum of their parts. There are no easy realizations, and no tidy conclusions. Intimate in its telling, We the Animals rings with truth.

In this interview with AARP VIVA, the 31-year-old Torres — a graduate of the Iowa Writers’ Workshop and currently a Stanford University Wallace Stegner Fellow — acknowledges the semiautobiographical nature of the book while making important distinctions between fact and fiction. That Torres was able to mine the difficult terrain of his childhood and produce this well-crafted gem of a debut novel is one more reason for readers to take note of this new writer and book.

Next: Interview with Justin Torres. >>

Q. How would you describe We the Animals?

A. I figured out that I was writing a coming-of-age story at a certain point because I had accumulated enough of these kinds of episodic moments. But I wasn’t interested in writing the typical kind of coming-of-age story where one character’s understanding of themselves and their place in the world evolves over time, and they emerge fully formed at the end. My experience with family, and being a child, is that you lose your identity within the family. This novel is about siblings and the moments that force you into awareness. As far as plot, I wasn’t interested in having one overarching traditional narrative arc, but instead there are a lot of mini-plots. The novel is fragmented and examines a series of concentrated moments.

Q. Among the coming of age elements, the unnamed narrator is struggling with his sexuality. Did your own experience as a son in a family of boys echo the narrator’s?

A. Definitely. In my own personal experience, sexuality wasn’t something that was talked about in our house, and growing up in a house of boys it was a wall for sure. I didn’t really come out; I was dragged out. Over time, my family came to terms with me being gay, and it’s not really an issue anymore. But the world has also changed a lot since I came out.

Q. How has your family responded to your work?

A. My mother read the book and loves it. She cried a lot while reading it. It took her awhile to accept it’s fiction, not memoir. She used to say, “That never happened,” and I’d respond, “Of course not, it’s fiction.” She said something to me just recently that was really sweet. She said reading the book reminded her to appreciate the here and now. There were times in her life when she was so busy just trying to put food on our table, and it was always such a struggle that she didn’t realize there were these moments of laughter like in the book. One of my brothers has read it, but we haven’t talked about it. My other brother I don’t believe has read it, and we don’t talk often. I don’t think my father has read it, and I really don’t know what he is going to think of it.

Next: Finding solace in books. >>

Q. Has your notion of family changed as you’ve aged?

A. Yes. As I’ve become an adult, I definitely have a new family that consists of my friends, and I take that very seriously. As a queer person, you are forced to rethink your notions of family. These friends-turned-family have had similar experiences, and we understand and support one another. I just got engaged to my partner, and we are thinking of having children, so this will create a new family.

Q. Do you see yourself as a Latino writer, as part of a collective?

A. Absolutely. I’m proud to identify with the Latino community, especially the Latino writing community. In a larger sense, I’m interested in literature being produced by people of color and contributing to that rich tradition, and I see myself within that trajectory. At the same time, however, it’s tricky business. There were times when I was kind of shut out from the Latino community on a personal level, but never as a writer. I totally see myself as a Latino writer. Those concerns are there in the writing and I wouldn’t want it any other way.

Q. Have you been influenced by any Latino writers?

A. Obviously Junot Díaz — but who hasn’t been influenced by him in general? I get compared to Sandra Cisneros a lot. Structurally this book is similar to The House on Mango Street, but there was probably a decade between me reading that book and writing my novel. Rigoberto González is a writer I admire a lot. Jaime Manrique, Manuel Muñoz, the list goes on.

Q. You cover a lot of emotionally difficult terrain in the novel. Do you hope your book can give readers solace or make them feel less alone?

A. I’ve had times in my life when books have literally saved me. When I was institutionalized in high school, I felt like books were the only way out, my only way to escape. When I was a kid, I was an insane reader mostly because it allowed me to focus and shut out what was happening around me. As a writer, if you aren’t doing it to connect deeply with readers, then I’m not sure why you write. I don’t judge other writers, but for me it has to have meaning beyond being a well-crafted book. The novel isn’t going to touch everyone, that’s for sure, but it’s enough for me if it touches one reader. I absolutely wanted to give solace to readers and making something beautiful is great for the writer and, hopefully, cathartic for the reader as well.

Q. What are you working on now?

A. I’m working on my next book. I’m in the beginning stages and it’s slow going. But I’ve written a couple of stories since the book has been published, and one has been published in The New Yorker, and another one is coming out in Harper’s. These stories have been important to me because I’m not writing directly about childhood and because you write one book and it’s well received, but you wonder if readers will continue to care.