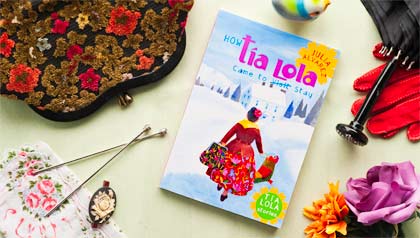 En español | "I think of myself as a writer who tells stories," Julia Alvarez says. "I don't think of my 'children's books' as just for children, but as books for children of all ages."

Though she has authored a handful of well-known adult fiction titles that include How the García Girls Lost Their Accents and In the Time of the Butterflies, Julia Alvarez, 61, has penned an armload of works for young readers, two of which have earned Pura Belpré Awards, a recognition presented to Latino writers and illustrators of children and YA (young adult) books.

How Tía Lola Came to Stay, the first in a four-book series, was published in 2001. The sequel, How Tía Lola Learned to Teach, appeared nearly a decade later in 2010. The final two installments come out almost back-to-back this year: How Tía Lola Saved the Summer, published in May, and How Tía Lola Ended Up Starting Over, slated for a September release.

Alvarez, who lives in Middlebury, Vermont, became interested in children's literature through the coffee farm and literacy school in the Dominican Republic she established with her husband. "A lot of our students were adults who couldn't read or write," she says. Though she shared a number of books translated into Spanish with them, the stories didn't reflect their reality. So Alvarez began to write the folk tales and stories she heard around her.

That's how she came to write the first Tía Lola story, too. "You hear all Latinos are so happy and all the generations live together and we're these perfect little families," Alvarez says. Life, however, is a bit messier. Her 9-year-old nephew was having a tough time as his parents went through a divorce. "I thought, 'I want to write Nuni' — that's his nickname, Nuni — 'I want to write him a story in which families are complicated.'"

So she created Tía Lola, a warm and wacky great aunt from the island tropics of the Dominican Republic, who arrives in snowy Vermont to take charge of her grandnephew, Miguel, and his young sister, Juanita, after their parents' divorce. Tía Lola wears summer dresses with parrots and palm trees, pink hibiscus flowers in her hair and a beauty mark that appears sometimes here and sometimes there.

Alvarez based Tía Lola on the countless aunts she knew growing up in the Dominican Republic. "My father was one of 25 kids," she says, so she had many real-life characters to choose from. Now an aunt herself, Alvarez says, "I don't think I'm as much fun or as crazy as Tía Lola, but I want to be."

She had never considered expanding that first book into a series. Once she's done writing a book, Alvarez says, "It's sorta like I broke up with you. That's it. I don't want to go back there." But she received so much mail from readers wondering what happened to Tía Lola and the rest of the family that her editors asked if perhaps she might return to the story.

"Maybe they put it in my head that the character was still around. Maybe," she wondered, "there is another book about Tía Lola?"

Actually, there were three. "After I finished one," she says, "I had to figure out what else happened."