En español | While writer Raul Ramos y Sanchez says the details are Hollywood confidential, he reports meeting with major studios about turning his book into a movie. He credits this coup to winning a Latino Books Into Movies Award sponsored by the nonprofit Latino Literacy Now. 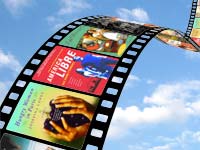 Last year, Ramos y Sanchez explains, he posed for a photo with the organization's president, Edward James Olmos, upon winning the Action and Adventure category for America Libre, a dystopian novel about immigration.

"One of the studios saw that photo and was willing to look at my work," says Ramos y Sanchez, 61, who lives in Dayton, Ohio. "That was a huge advantage, and that wouldn't have happened if I hadn't won."

The Latino Books Into Movies Awards, offered in seven categories, will be handed out for the second time on October 8, 2011, during the Los Angeles Latino Book & Family Festival at California State University, Los Angeles.

For the past 14 years, Latino Literacy Now has bestowed awards to writers while holding more than 60 book festivals around the country. The organization, which seeks to encourage regular reading, estimates 25 percent of the country does not read regularly.

Kirk Whisler, who developed the festivals with Olmos, conceived the new Books Into Movies Award so Latino books could gain greater recognition on the big screen. In the film industry, he says, "They get mounds of stuff that they never open. I thought, 'What would help attract attention?'"

"I think this recognition is important for Latino writers, given the historical disadvantage we have in Hollywood," says Fernández who works with the Latino Theater Company in Los Angeles. "Latino writers are writing important and vibrant stories that need to be told. Latino films adapted for books are too few and far between. It is very important to recognize them and in doing so, create work for Latino actors in Hollywood."

Marcos Gonzalez, an awards judge and private equity investor who started a fund supporting independent films, agrees. "There's a wealth of books being produced by Latinas and Latinos. There are a good number of books out there that people should know about," he says. "This is a contest that helps the process."

Josefina Lopez, 42, who won a 2010 award for her first novel, Hungry Woman in Paris, says although she hasn't garnered offers from movie studios, the awards make an important statement.

"Latinos are a huge percentage of our population, but we are invisible in film and television. We do not exist," says the author and screenwriter who also penned the screenplay for Real Women Have Curves, a film starring Ugly Betty's America Ferrera. "I really hope this award helps other writers. This initiative can help get the books to a couple of more producers."

You may also like: The Harvest, a documentary produced by Eva Longoria.