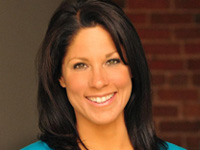 Author Carissa Phelps tells her story of escaping life on the streets in "Runaway Girl."

At age 12, Carissa Phelps escaped a chaotic and troubled home life and ended up working as a prostitute on the streets of Southern California. Except for other runaways, group homes and pimps, Phelps was completely alone. Yet occasionally, Phelps found solace in school. With encouragement from teachers, she excelled in math and writing and slowly began to realize she was meant for more than jail or death.

Now Phelps holds UCLA degrees in law and business and works with at-risk youth. Her new book, Runaway Girl, explains her dark youth, the choices and the kind hearts who led her to a new life.