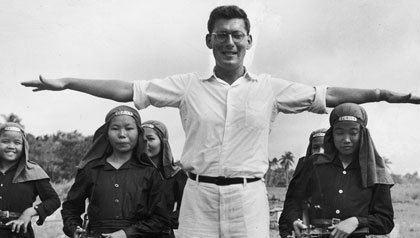 A longtime war correspondent with a yen for adventure, Roy Rowan has lost some of his wind but none of his zest as he gallops into his 10th decade. In his self-described “rambling memoir,” Never Too Late: A 90-Year-Old’s Pursuit of a Whirlwind Life, he mixes advice with anecdote in a bid to inspire others.

“This feisty man’s guide to growing old … is about aging, vigorously, actively, and any way but gracefully,” says Rowan, who quotes Dylan Thomas’s famous lines about raging “against the dying of the light.”

There is nothing particularly earth-shattering about Rowan’s advice: Find new interests (or explore old ones) after retirement, stay close to friends, use positive thinking to combat disease and infirmity. But his scattered recollections — related in chapters with titles such as “Quit Is a Four-Letter Word” and “R Is for Resilience” — make Never Too Late a congenial and often entertaining read.

A member of the so-called Greatest Generation, Rowan was a reporter and editor at a time when journalism was an expanding, profit-generating bastion of machismo and derring-do. After rising from U.S. Army private to major in the Pacific theater during World War II, he spent most of his career working for Henry Luce’s empire of magazines, including Time, Life and Fortune. So loyal was Rowan to the Time Inc. realm that he wed “a charming young Life picture researcher” after being introduced to her by his mentor, Bill Gray. Roy Rowan and Helen Rounds — to whom Never Too Late is dedicated — have been married for more than 58 years.

Between magazine-editing stints, Rowan covered wars both cold and hot in Europe and Asia. He reserved his greatest passion (as did Luce) for China, where he witnessed at perilously close hand the civil war between the Nationalists and the Communists in the late 1940s. Rowan returned to China periodically after that, serving as Time’s Hong Kong-based Asian bureau chief in the 1970s and writing a 2004 memoir, Chasing the Dragon, about the Maoist revolution.

Rowan has authored nine books (and coedited one more) on subjects ranging from minor-league baseball and management techniques to presidential dogs. He has also fathered four sons, survived melanoma and bone cancer, and cultivated the friendship of such figures as Luce and Gerald Ford. Luce was “intimidating and aloof around the office,” he recalls, but “warm and friendly to his correspondents out in the field.” Ford emerges as a “regular guy who just happened to be president of the United States.”

Next: Writing projects of sheer enjoyment with useful risk. >>

Rowan himself isn’t exactly typical: He has been blessed with unusual fortitude, a strong constitution and an enviable run of good luck. He came of age at a time when jobs (remember those?) were relatively plentiful, and when educated middle-class wives sublimated their own ambitions to advance their husbands’ careers. (At one point, after she had prepared a home-cooked dinner for Rowan and his colleagues—Luce among them—“Helen opted to serve and not sit,” he tells us, in a phrase that seems all too metaphorical.)

Rowan retired from Time Inc. in 1985 at the age of 65, then made an apparently seamless transition from full-time employment to an independent writing career. His post-retirement writing projects have combined sheer enjoyment (indulging his love of baseball by following the careers of two minor-league pitchers) with useful risk (living as a homeless man to write about homelessness). “I have long been intrigued with what gives some individuals the strength and persistence to overcome devastating experiences,” he writes, “while others are totally unable to cope.”

To Roy Rowan’s manifold attributes, add outlier: Not everyone will be in a position, physically or financially, to follow his advice — or his example (he bought a new car at 90). But as my late mother, likewise ferociously optimistic to the end, would have said: “May he drive it in good health.”

Julia M. Klein is a cultural reporter and critic in Philadelphia and a contributing editor at Columbia Journalism Review.